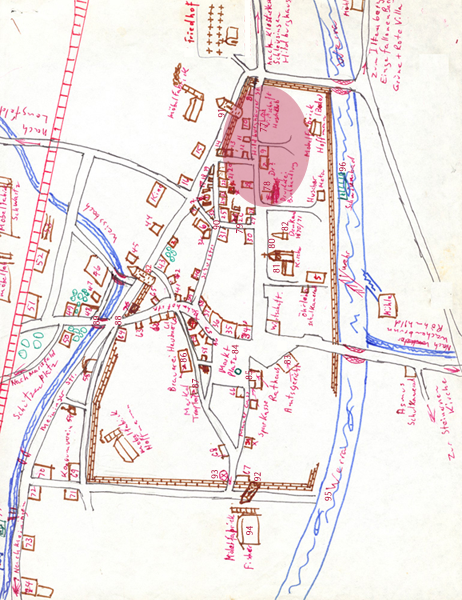 We start just inside the city wall at the south and move northeast towards the church. 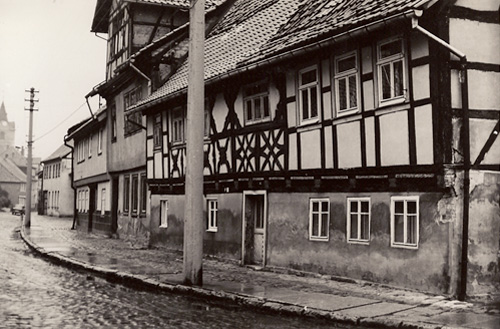 This is on Hildburghäuser Strasse. The house on the right is very old. A family Heun lived there, they had a billygoat and it stank something awful. All the people brought their Nanny Goats there.
[Editor’s Note: Hildburghäuser Strasse has had many names in its lifetime. In 1899 it was known simply as Oberstadt Strasse; in 1921, the year Manfred Rosengarten was born, it beame Hildburghäuser Strasse. In 1933, it became Hindenburgstrasse, but, after WWII the name changed once again, this time to Ernst-Thälmann Strasse.] 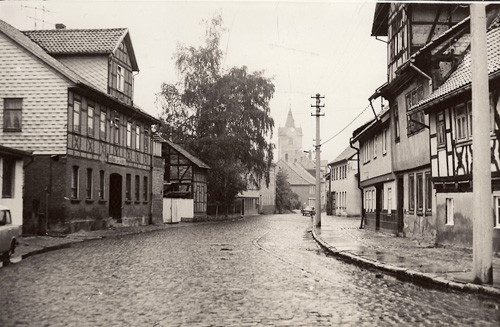 Moving right along, all seems as I left it 50 years ago. 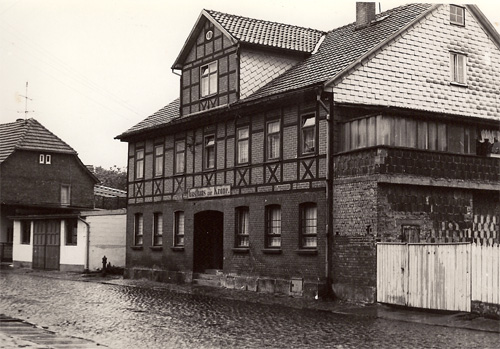 “Gasthaus Zur Krone” or “Crown Inn”, was the clubhouse of a rival soccer club, Themar Blue-White, we called them “Husch Club.” Almost opposite was our club “Zum Hirsch,” or “Stag Inn” [#10]. Our club was Themar “Grünweiss” or “Green-White”, much better people of course, not bums like the “Husch.” My dad was very active with the youth section of the sports club, in track and field, swimming and soccer. One time I won 1st place in the 100 meter and 800 meter in a district meet for us, against stiff competition. 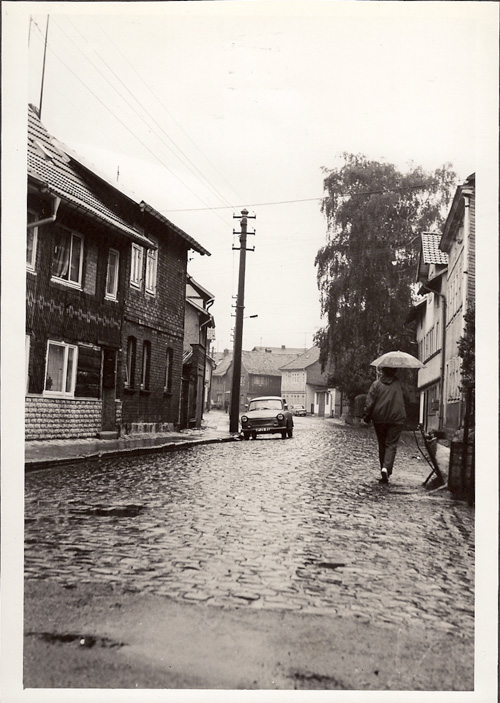 Looking back from where we just came — in the house on the left [#11] lived Karl Trümpert, an old school comrade. He started going with a girl I was not permitted to go with because of the Nazis’ Nürnberg Laws, her name was Margarete Reinhardt and we were the only children in our class who did not say “Evangelisch.” When religion came up in periodic statistical questions, she said “Free Thinker” and I said “Mosaisch, Moishe Rabainu,” oi.

Please notice the pavement. Those are very old cobblestones, made from basalt. When it rained or it was frosty, they were slick as glass. 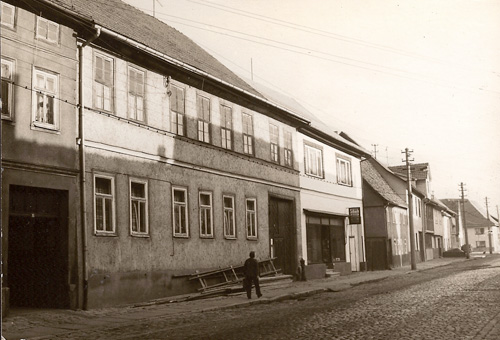 The Sanctuary was upstairs, with barrier in the back for the women’s section according to tradition, although it was supposedly a “Liberal” school. But customs die hard. Downstairs lived Lehrer (Teacher) Levinstein, he was our Chasan, Shochet, and Preacher, performed weddings, burials and Bar-Mitzvahs. Thank G-d he was not a Moel. My grandfather was the Shamash or Servant of the Synagogue. As an afterthought — the Ner Tamid (Eternal Light) was a large red globe. The Hebrew writing I do not recall, but on one side was a big Masonic Square and Compass. The glassblower mistook the Star of David for a Masonic emblem.

My grandparents lived in an apartment in the back of the sanctuary. Both my mother and my uncle Oskar were born in this house. My grandfather and the Herr Lehrer divided a rather large garden between them, where we grew vegetables, potatoes, etc. It was a good thing during the Depression of the 1920s and 1930s, otherwise we would have had still less to eat.

Once my brother and I built a Sukkah in the back, in spite of being refused permission by Herr Lehrer. Afterwards the Kehilla (Community) praised us and sat down in it for a little while. In the back of the garden was a large crabapple tree. The apples with a lot of sugar became jam and it was a good tree for a treehouse. Also there was a grassy area, the grass was exchanged for something. We had a hazelnut bush and a natural well or rather a waterhole, where we dipped water and schlepped it in buckets and sprinkling cans to water the garden, everything the hard way. Once I launched a glider that I had built from the apple tree, and it crashed against a bakery chimney not far away. 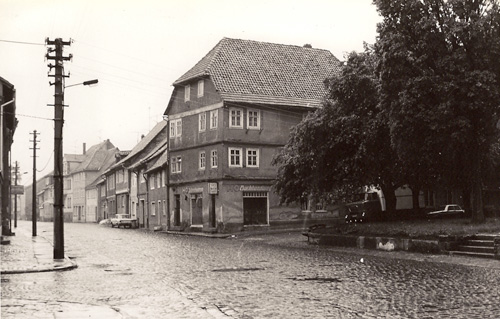 This building and the one in the picture below are across the street from each other. The first one shows the local bookstore and lending library, also the newspaper, Themarer Zeitung, was published here. The owner was a German Nationalist and an early Nazi. In the back was a strange contraption, we took our laundry there and rolled around large rollers and laid them on a table, then a large box filled with rocks was moved back and forth over the roller, which ironed the laundry, bed sheets, towels, etc. It was called a mangle. Saved a lot of ironing, we had no electric iron either. We either heated an iron block in the stove, then put it into the iron, or we used charcoal for finer things. 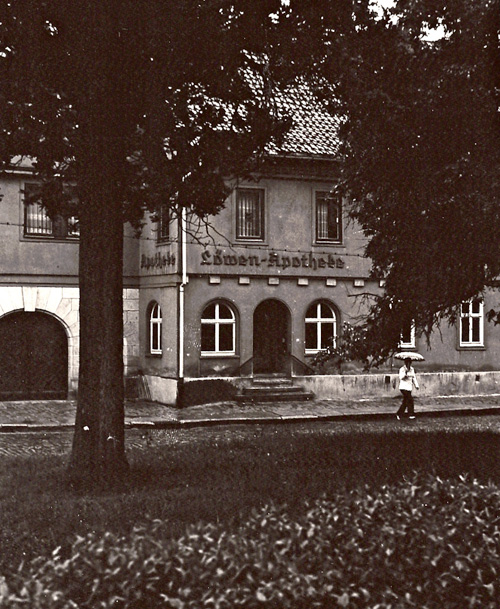