When research into the Bär/Baer family of Themar began, it focused on the family of Samuel and Jette Baer, the owners of the shop on the Market Square. We learned that with the death of Samuel Baer, the ownership of the shop passed into the hands of daughter Karoline Baer. The fact that Karoline was married to a Bär, Louis by name, was confusing and the whole matter became more and more complex as we started to explore the family roots of both Karoline and Louis back into their time in the village of Marisfeld, close to Themar.

What we know about the Bär family starts with the entries in the Marisfeld Jewish Matrikel, the Register of birth, deaths, marriages, and families. These Registers survived the war and were microfilmed and preserved. As one can easily see from the entry for the family of Emanuel Bär (at right), the pages are moldy and sections impossible to read, but slowly through other genealogical resources, we are building a more complete picture. 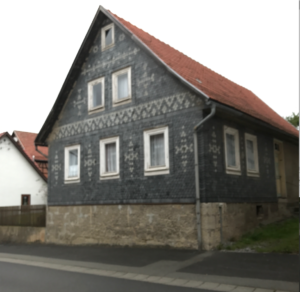 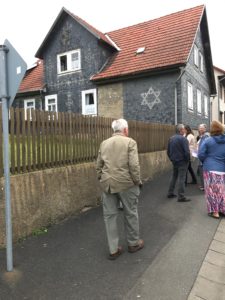 First to Marisfeld where the family settled in the 1700s — from where we do not yet know. The two images are of a house on the main street of Marisfeld, which current researchers believe belonged to the Bärs. What is remarkable about the house is the star outlined in the shale, which survived the war and the Holocaust.

To date, we can identify two major branches of the Bär/Baer family of Marisfeld that date back to the late 1790s. Samuel Bär (1793-1854) was born in Marisfeld but the birthplace of Emanuel Bär (1797-late 1870s) is not identified in the Register. As yet we have been unable to identify the patriarch and matriarch who might bring the two threads together and perhaps we will not find them in Marisfeld and maybe not at all. The Family Registers for the two men do not identify their fathers or mothers.

Samuel Bär was the first to marry, sometime in the late 1810s or early 1820s; his first wife was Gella Aron of Arnstein, Bavaria. Their first child was sadly stillborn. They subsequently had three children, but Gella died with the birth of Karolina on 28 March 1826. In the early 1830s, Samuel remarried, choosing as his second wife Rose Aron, Gella’s sister. Samuel and Rosa had seven children.

A third Bär/Baer family in Marisfeld, that of Samuel Joseph Bär/Baer, is critical to the Themar story. He was born in 1827 in Marisfeld; as stated above, unfortunately the Marisfeld Register does not tell us who his parents were. The ‘Joseph’ as a given name suggests that his father was a Joseph Bär, probably a contemporary and cousin of Emanuel and/or Samuel Bär. So far we have been able to find anything further backwards.

We believe that Samuel Joseph Bär (1827-1883) was the first Bär to move from Marisfeld to Themar. A travel certificate issued on 20 Sept 1856 allowed 29-year-old Samuel Bär to travel from Themar to Leipzig to visit the famous trade fair. The family continued to live in Marisfeld in the late 1850s, but in the early 1860s they moved to Themar; in 1863, Hulda Bär was born in Themar, one of the first Jewish children to be born in the small city. It was Samuel Joseph Bär who changed the spelling of the name from Bär to Baer for business purposes, although official records did not necessary always make the change.

Marriage to Karoline Baer, eldest daughter of Samuel Joseph, brought Louis Bär, son of Emanuel, to Themar, albeit in a roundabout way. Karoline, who had been born in Marisfeld, returned to Marisfeld upon marriage, and her and Louis’s children, Hulda (1874) and Emil (1878), were both born in Marisfeld. However, after Emil’s birth, they left Marisfeld to live in Themar and take over the family business, S. J. Baer, on the market square. Samuel Joseph died in 1883.

In the first decade of the 1900s, the following members of the Bär/Baer families were living in Themar:

Should anyone reading these pages have information to contribute to our shared knowledge, please contact Sharon Meen at s.meen79@gmail.com. We look forward to hearing from you.