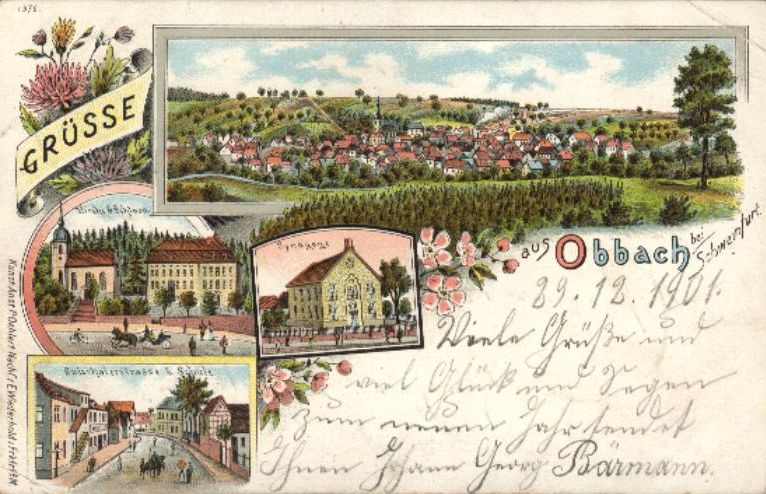 Here she and Abraham ran a grocery store and raised two children, Paula, b. 1896, and Julius, b. 1899. Paula and Julius were first cousins to Selma, Rosa and Minna.

The Abraham & Rosa Schloss family became part of an established Jewish community — in both 1867 and 1900, Jews represented about 29% of Obbach’s total population (about 600 citizens), although both the Jewish and non-Jewish populations were declining in the late 1800s and early 1900s.

Both of Rosa’s children married and formed families of their own. Paula married Emil Rosenbusch and they had two sons in the 1920s. The Rosenbusch family lived in Obbach until the 1930s.

Julius married a woman whose birth name was Rosa/Rosl Schloss. Julius and Rosa lived in Schweinfurt, Rosa’s home town, and raised two children, a boy and a girl.

1933-1944
In 1933, 106 Jews lived in Obbach (16.5% of the town’s population of 640) and, as in other German villages, they started to experience the assault of persecution. Yet, like most of the Jewish families of Obbach, the Schlosses remained in the town: a March 1935 census counted 101 Jews in Obbach. In 1936, Rosa’s husband, Abraham Schloss, died; Rosa continued to live in Obbach with her daughter, Paula, and the Rosenbusch family.

By 1938, only 17 Jews had left Obbach. In the November pogrom, Kristallnacht, the synagogue was set alight, businesses and living quarters were ransacked, and the men of the town rounded up. Rapidly, the situation worsened: in April 1939, Rosa Reis Schloss was forced out of her home in Obbach and into an ‘Altersheim’ (Old People’s Home) in Würzburg that had been designated a “Judenhaus.” Her daughter and son-in-law, Paula and Emil Rosenbusch, with whom she had shared the home in Obbach, left Obbach for Frankfurt am Main with their two young sons.

Rosa’s son, Julius, was able to leave Germany with his family in February 1939, reaching the United States in March 1939. Julius died a year later in 1940, but his wife and children lived on in the United States.

Rosa and the rest of her family perished in the Holocaust.

On November 22, 1941, Paula Schloss Rosenbusch was transported with her family from Frankfurt am Main to the Kovno Ghetto in occupied Lithuania. Paula, 45, her husband Emil, 53, and their two sons, Gustav, 15, and Herbert, 12, were murdered on November 25, 1941.

On September 23, 1942, Rosa Reis Schloss was deported from Würzburg to Theresienstadt Ghetto. She died there on April 8, 1944.