2019: Stolpersteine for the Frankenberg & Grünbaum Families

The text below is a translation of the article, “,,Ein Quadrat auf der Erde — Ein Mensch,“written by Cornell Hoppe.

“Year after year, the residents of the city of Themar commemorate their former Jewish inhabitants. Thirty-eight (38) Stolpersteine/stumbling blocks have already been laid in the city to commemorate them. Another 13 were added on Wednesday November 27 2019.”

Themar — “A walk in the footsteps of my ancestors,” is how Garry Meller describes his visit to Themar on Wednesday morning. He is a descendant of the Grünbaum family, who once lived in Themar. He adds that he feels very welcome here. And he is visibly moved that people who are strangers to him are erecting a monument to his ancestors.

It’s cold and drizzling this Wednesday morning. Nevertheless, more and more people are coming to take part in laying the stumbling blocks. Class 9a of the “Anne Frank” school is included. Renate Meyer-Merkl came from Cologne. She is a relative of the last Jewish teacher of Themar, Moritz Levinstein. Brothers Poul and Arne Müller also came from Denmark, they are descendants of the Max Müller I family. Members of the “Themar meets Europe” association and some other descendants of the Themar Jews have returned to the city to take part in this annual event. State Secretary Babette Winter came from the Thuringian State Chancellery, Vice District Administrator Dirk Lindner and Mayor Hubert Böse also accompany the laying of the 13 stumbling blocks. 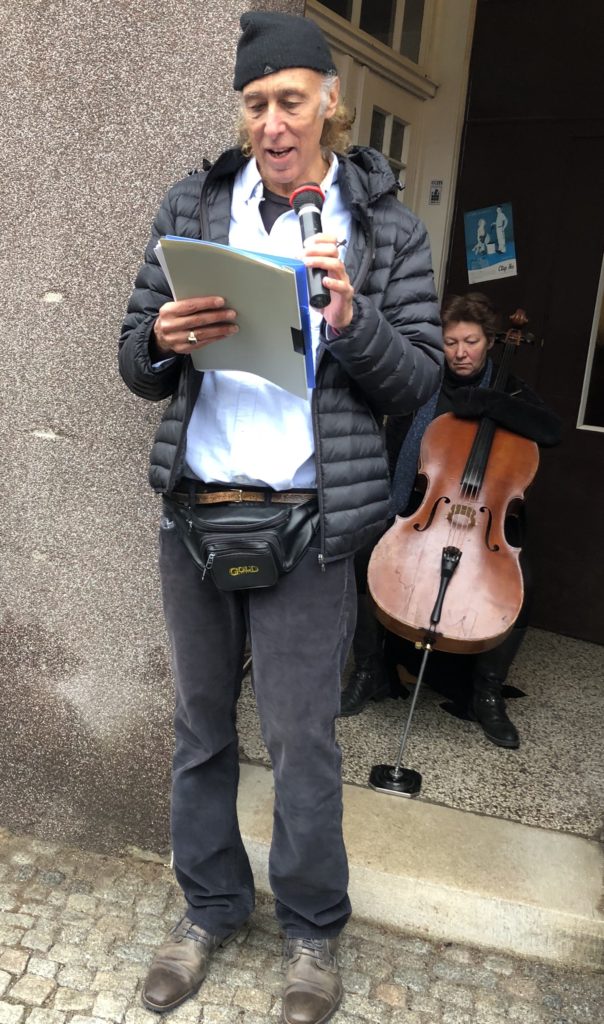 Garry Meller of the Grünbaum family.

The first Stolpersteine were laid in front of a clothing store at Bahnhofstrasse 23. The Grünbaum family had a textile shop there, explains Sabine Müller from the “Themar meets Europe” association. In front of the house, a total of six stones are sunk in the paving. Stones for Hugo Grünbaum and his wife Klara, their daughter Else Neuhaus and her husband Arthur and their daughter Inge. And for Hugo’s and Klara’s son Hans Grünbaum, the only one who survived

Garry Meller’s grandfather Karl was also born in Themar, but went to Erfurt in 1913.  Karl’s son, Kurt, escaped first to England and subsequently went to Australia.

Garry Meller explains that he only started learning about his family connections five years ago. In search of any information, he ended up on the very informative website about the Themar Jews developed by Sharon Meen. In this way, he was able to trace his family tree back into the 1700s.

“The story is remembered and the family is not forgotten,” says Garry Meller. But he also sees that anti-Semitic tendencies are still there. “By remembering the past, we can help change the future,” he hopes.

Another stumbling stone is set across the street. It is to remember Meta Krakauer (née Frankenberg), who also had a textile shop there. In 1942 she was deported to Theresienstadt. She was the only Themar Jew to survive a concentration camp. She died in 1955, aged 88 in Dinslaken. Themar’s Mayor Hubert Böse quotes Ludwig Mühlfelder at this point with the warning that today’s young people cannot be held responsible for the actions of their ancestors, but one can expect that they will deal with the crimes of their people. “It was the industrial annihilation of people,” says Böse. “We have to remind everyone and do everything we can to ensure that this never happens again.” 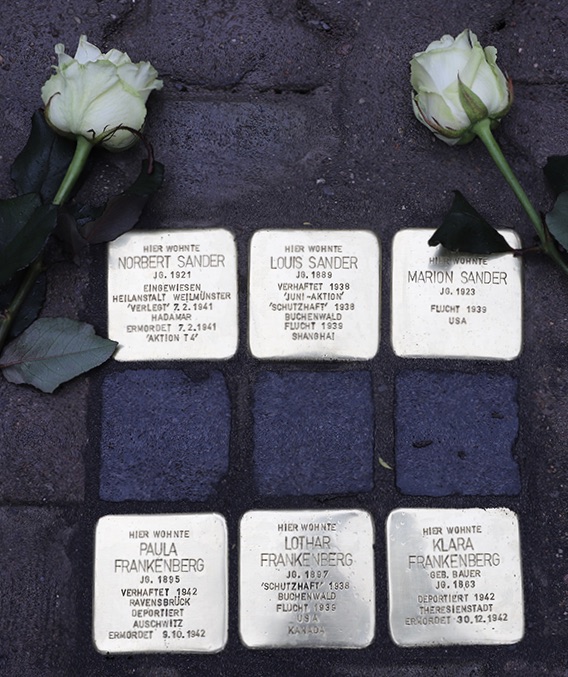 Two [other Frankenberg] families are remembered in front of a house on Leninstrasse. Three stones each honour the Frankenberg family and the Sander family. Klara Frankenberg and her children Paula and Lothar lived there. Klara, age 79, was murdered in Theresienstadt in 1942. Paula Frankenberg was first taken to the Ravensbrück concentration camp and later to Auschwitz, where she was murdered in 1942. Lothar Frankenberg was taken into “protective custody” in Buchenwald in November 1938. In 1939 he managed to escape to England and subsequently to Canada where he lived until his death in 1975. 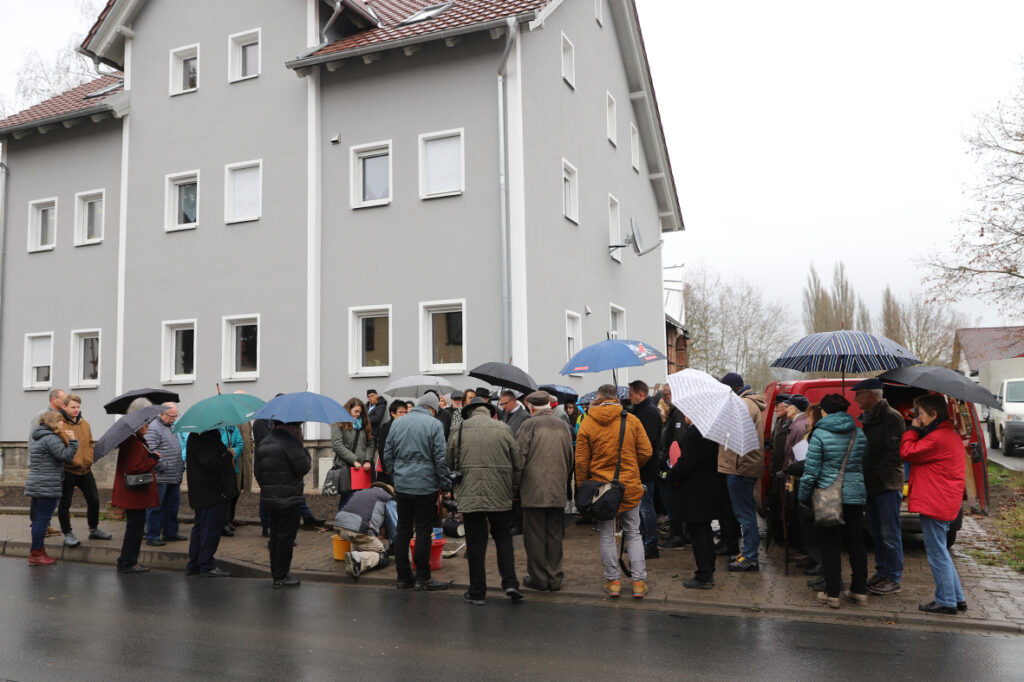 Louis Sander [the husband of Hilda Frankenberg, who died in 1938] fled in 1939 after he was taken into so-called ‘protective custody’ and brought to Buchenwald in November 1938. He came to the USA via Shanghai. His daughter Marion Sander was also able to flee Germany in 1939 and lived in San Diego. Marion’s brother, Norbert, was taken into so-called protective custody in November 1938, at age 17. It was not possible for him to flee, because he suffered from epilepsy. Norbert was murdered in Nazis’ euthanasia program at the  Hadamar killing center.

State Secretary Babette Winter thanked artist Gunter Demnig for creating the largest decentralized memorial with his concept. She also praised the engagement of the Themar citizens who want to remind people who were once citizens of this city. “With the immortalization of their names, they returned a little bit to the city,” said Winter. She had donated two stones after a visit to Themar in the summer. Remembering, she says, is one thing. “But we still have to be vigilant today, because it is bitter knowledge that approval of anti-Semitic statements is also increasing again in Thuringia,” she says, referring to the Thuringia Monitor that will be published in the next few days.

Dirk Lindner agreed with her words and warned that those who trivialize and dismiss the Holocaust should be resolutely confronted.

The ceremony closed with a poem.

“I’m lying on the street. People walk past me carelessly. I am so valuable. // A name is engraved with data.// A square on earth. – A human. Every life is valuable.”