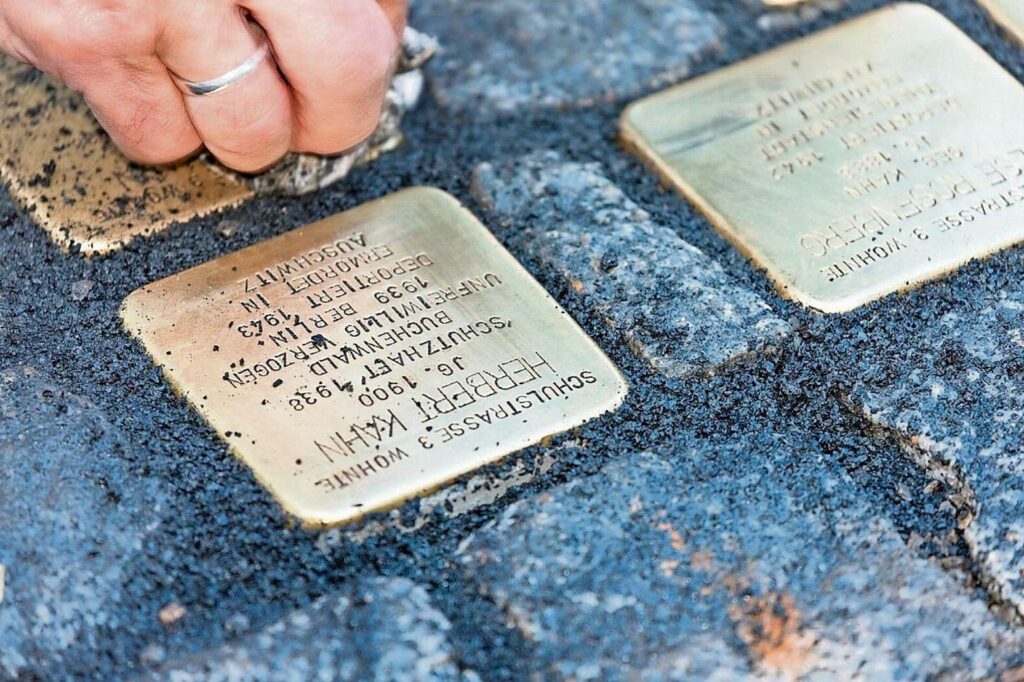 The text below is a translation of an article that appeared in Freies Wort on 26 November 2019.

See as well translation of article that appeared on 28 November 2019, after the laying of the Stolpersteine.

Themar – “I saw the two women come out of the house. One stepped very carefully because she had broken a leg. They carried the little luggage around her body,” reported a woman years ago who was still remembered 19 September 1942. At that time Paula and Klara Frankenberg started their way to the train station. They were to be transported to the concentration camp by train. Both were murdered there, recalls Barbara Morgenroth from the Themar Trifft Europa association. Six million people of Jewish faith and descent died in this and similar ways — a number beyond which one can hardly imagine a single fate.

“But it was neighbors, business partners, friends, playmates. They lived in our city as they did in almost all cities in Germany. The shiny brass stones [the Stolpersteine] that are embedded in the pavement of the footpaths are a reminder of this,” Barbara Morgenroth.

At 9 a.m. tomorrow, thirteen such Stolpersteine will be laid by the action artist Gunter Demnig in front of the last places of residence of Meta Krakauer (née Frankenberg), and the Grünbaum, Neuhaus, Frankenberg and Sander families, in Bahnhofstraße 23 and 36 and in Leninstraße 20. It is a special honor that Garry Meller of Australia, a descendant of the Grünbaum family, will be among the guests. During his stay in Themar he plans to to follow in the footsteps of his ancestors in the Werra valley. State Secretary Babette Winter will also attend the ceremony as a guest and sponsor of two Stolpersteine. Students of the Anne Frank Regelschule and musician Renate Kubisch with her cello will accompany the ceremony.

The association Themar Trifft Europe, organizer of the Stolpersteine installation, invites you to a small reception in the shop of the Morgenroth’s house and thanks everyone who has contributed to the financing of the stones. On the evening before the installation, a lecture on the history of the Jewish community of Themar will take place on Tuesday at 7.30 p.m. in the city hall of Themar. Katharina Witter from the Meiningen State Archives will about the beginnings, the special features of,  and the end of the Themar Jewish community.