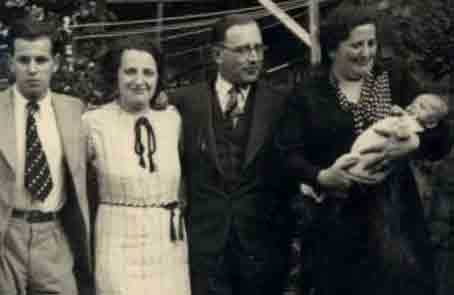 The photograph above illustrates how the outbreak of war affected the Jewish families of Themar. The two men—Adalbert Stern on the left, and Arthur Plaut in the centre, were both able to escape Germany and enter Britain before the war started. Both men had transit visas and hoped to immigrate imurdered.nto the United States as soon as their American visas were finalized. Elly Plaut, left between her stepbrother Adalbert and her husband Arthur, hoped as well to escape Germany and immigrate into the United States, with her daughter Hanna Karola, and her mother (and Adalbert’s) Selma Stern, who is holding the baby. The outbreak of war overturned these plans: Elly, Selma, and Hanna Karola were still in Germany; the hoped-for family reunion of the Plauts delayed until 1942 and did not include Selma Stern who was deported to Riga in January 1942 and murdered.

Thirty-five members of the Jewish families of Themar were in Britain, all of them in England. British policy was that refugees could only enter Britain with a transit permit; that is, they already had permission to enter another country at some point in the nearish future. Britain would not have to accept them as permanent residents.

What do we know about the men, women, and children who escaped to Britain?
Over half were men (57%), and three were 15 years and younger (the youngest 9-year-old Inge Gassenheimer, who came with her parents.) They ranged in age from 9-year old Inge to 63-year old Albert Sachs, b. 1876 in Themar. About one third were married, but of these, only half came with complete family units. Six men—Dr. Ernst Cohn, Herbert Gassenheimer, Julius Kahn, Erich Neumann, Arthur Plaut, and Heinrich Seckel—came alone in the hope that their wives and children would follow.

With that given, the escape of these 35 individuals was made possible through a variety of means: some were sponsored by family members already in Britain who guaranteed that incoming migrants would not be a burden on the state; others arrived sponsored by Jewish organizations who undertook the same guarantee. Three programs explain how many of the Jewish people related to Themar managed to enter Britain: the Kindertransport program; the Domestic Help program; and the Kitchener Camp program.