Who was still living in Themar?

On 1 September 1939, as German forces were pouring over the eastern border into Poland, Clara Müller put pen to paper to describe the comings and goings of Themar’s Jews to her son Willi in Palestine. “Dear Willi,” she wrote: 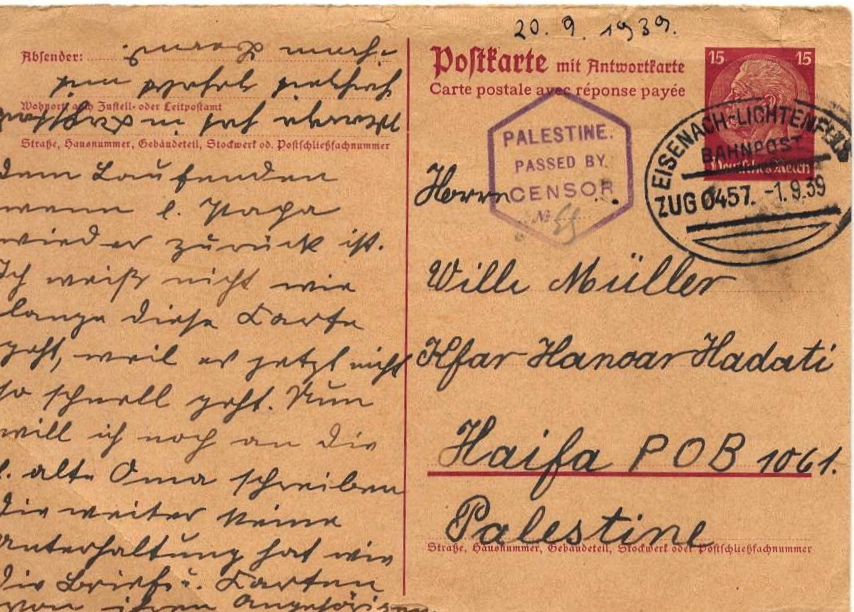 I have just written to Meinhold, so now it’s your turn. You will receive this letter when dad is back. He has accompanied Herbert to Dresden. Herbert wants to try to get his visa. Lothar [Frankenberg] is in Berlin and obtained his visa and Herbert Gassenheimer is already in England. […] Herbert [Müller, Willi’s brother] has his passport. Norbert [Müller] is on his way to England. His people [Sebald and Laura Müller and their daughter lived in Nürnberg] want to visit us, I think. Mani-Rhina [Manfred Nussbaum] likes London. I already told you that Käthe [Nussbaum Wurms, who lived in Amsterdam] has a little daughter. I’ll keep you up to date when dear Dad is back again. I do not know how long this card will take to reach you because the mail is pretty unreliable right now. Now I want to write to old grandma {Bertha Nussbaum, Clara’s mother] who has no other entertainment but the letters and cards from her relatives.

Eighty years later, Clara’s and Max’s letters and postcards to their sons help to reconstruct the Jewish community of Themar as World War II began. It is definitely a challenge: the best estimate at this time—20 August 2019—is that at least 50 members of Themar’s Jewish families were living in Themar and 3 members in nearby Marisfeld. This number is derived from documents in the Themar City Archives and evidence from the Jewish families such as the letters of Max and Clara Müller.

Two documents in the City archives of particular interest are dated 27 September 1939 and 6 October 1939. The memo of 27 September 1939 identified Jews who were in Themar in early September but left Themar on that date. The official list of 6 October 1939 identified 33 Jews in Themar on that date and included the names of two men who had left on 27 September—Markus Rosenberg and Max Steindler. The explanation: The men taken to forced labour camps such as Neundorf were worked to exhaustion and then allowed to return briefly to their homes for respite, before being sent off again to hard labour.

The official list of 6 October 1939 excluded the Jewish-Christians in Themar such as Erna Haass, née Kahn, who converted to Christianity, and her twins with Hermann Haass, Johanna and Günter; the daughter of Adolf Kahn, and the sons of Louis and Olga Walther. This exclusion was but a snare and a delusion:official documents indicate that the Nazi regime considered them Jewish and would definitely include them in its rapidly escalating antisemitic policies.

Unofficial documentation identified individuals who were in Themar in early September but left before 6 October 1939: Walter Rosenbaum, for example, left in mid-September for a “Hachshara” training program in Blankenese near Hamburg; Clara Müller sent the news to her son Willi in Palestine on 18 September 1939.

The map below is based on numerous documents both in the city and family archives.

Notes:
• We do not know where the Walther family lived.
• The three people who lived in Marisfeld were Jacob and Hulda Kahn, the parents of Herbert Kahn, and Isaak Kahn, an uncle.