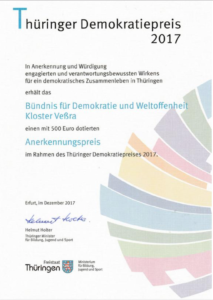 On 5 December 2017, Themar and Kloster Vessra were awarded the 2017 Democracy Prize for Thüringen for their peaceful protests against the right-wing extremist activities in Themar. As you may know, three right-wing concerts were held in the meadows abutting Themar, drawing over 8,000 right-wing extremists from all over Germany as well as Austria, Czechoslovakia, Poland and elsewhere. Multiple infractions of the law prohibiting Nazi salutes, etc., occurred but the concerts were not forbidden or halted.

The residents of Themar and nearby Kloster Veßra, the village in which the Thüringen neo-Nazis have their headquarters, staged strong and peaceful — and amazingly creative — demonstrations against the right-wing extremists. Their slogan, as you can see in the banner above, is “No place for Nazis — Themar remains ‘bunt'”. (The word ‘bunt’ used for ‘tolerant, free, and democratic).

Bundespråsident Frank-Walter Steinmeier attended the awards ceremony on 5 December 2017 in Erfurt, at which the awards for Democracy were given to Themar and Kloster Veßra. The prize to Themar is 3000 Euros, that to Kloster Veßra 500 Euros.

Unfortunately, despite the flouting of the law that takes place at the concerts, they are legal under German law. More concerts are planned for 2018. 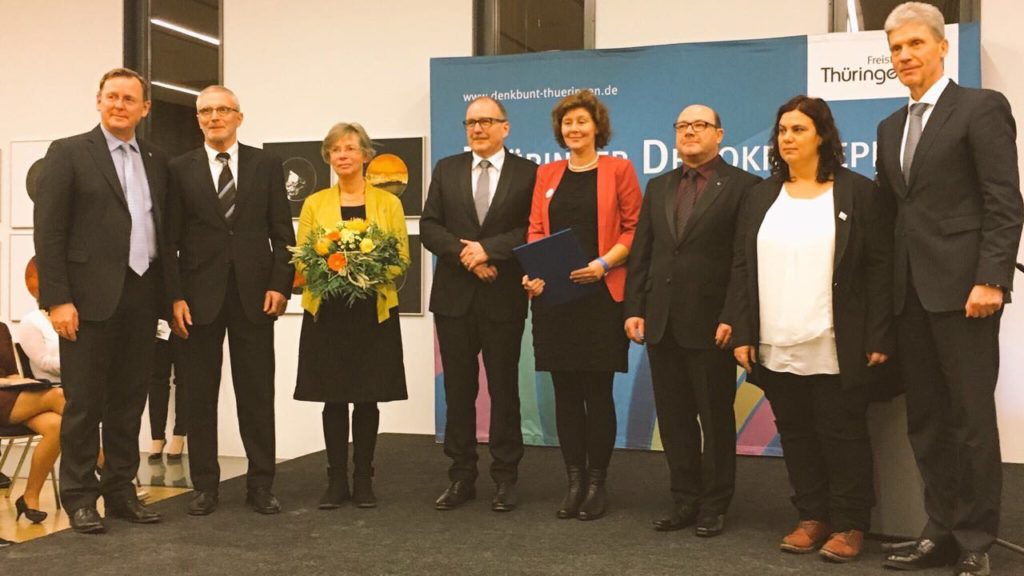