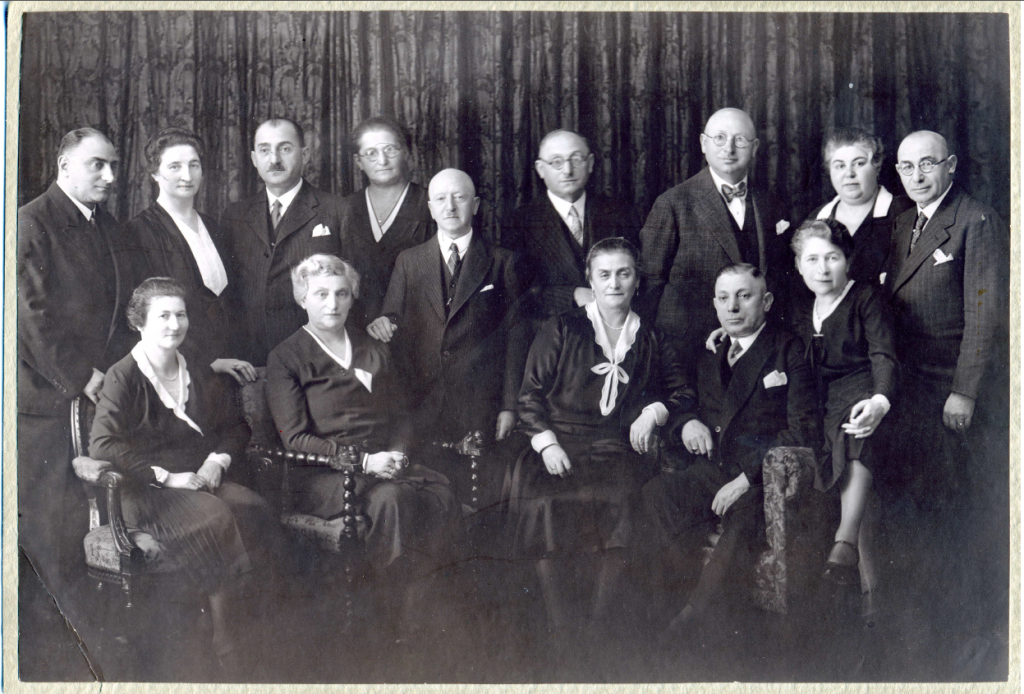 The Gassenheimer Siblings, 1925. Courtesy: Dieter Marcus (see below for names). They were gathered for the funeral of Simon Marcus in 1925. Bernhardt Gassenheimer, b. 1865, was absent owing to his residence in the United States. (See photo of him here). Photo courtesy of Marcus family.

The family of Samuel & Lotte Charlotte (née Stein) Gassenheimer was one of the founding families of the Jewish community of Themar and and remained a core family in Themar for 80 years. The family was also but one branch of a strong and successful family who had lived in southwest Thüringen from the mid-1700s and perhaps even earlier.

The family entry in the Bibra Jewish Register tells us that Lotte Stein was born in Diersburg, Baden-Württemburg (about 400 km southwest of Themar) on 06 June 1840, the daughter of Bernhard and Erna Stein. But how and when Lotte and Samuel met and married is not yet known. 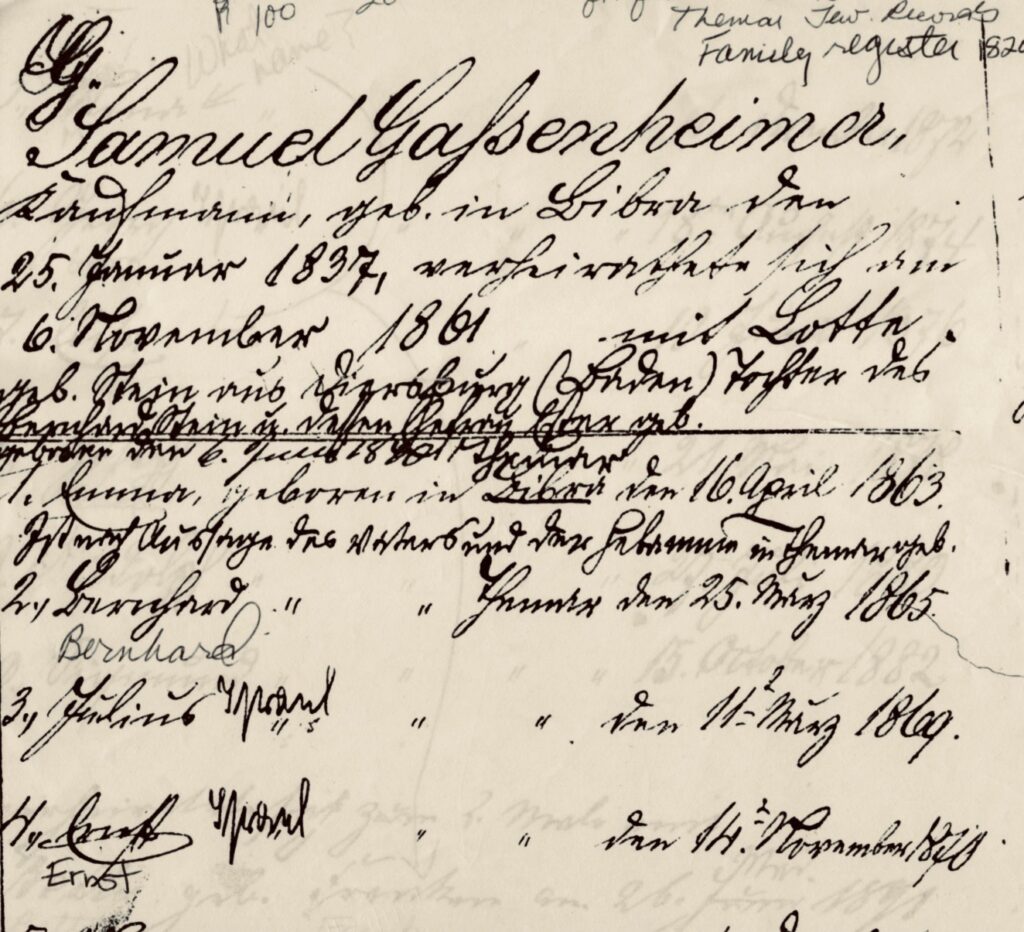 Samuel & Lotte Gassenheimer came from Bibra to Themar in the early 1860s as the rules about Jewish settlement in towns and cities eased.  Exactly when they moved is not yet clear: the entry for Emma above is unclear with mention of both Themar and Bibra; her 1915 Identity Card identifies her birthplace as Themar. Regardless this means that the Gassenheimer family was among the earliest Jewish families to move into Themar and earlier than previously noted in accounts of Jewish settlement in the area.

The 1875 ‘census,’ a listing of the residents of Themar, identifies Eisenhändler/iron dealer Gassenheimer living at Schuhmarkt 70, right near the market square. Nine people were living at that address: five males (Samuel, Bernhardt, Julius, Ernst and Georg) and four females (Lotte, Emma, Minna, and a housekeeper).

The eldest son, Bernhardt, b. 1865, followed the older strategy of emigrating  from Germany and seeking his fortune abroad. When he left as a teenager in 1880, the decision to emigrate was a sound one. It probably was not yet clear how many sons could be provided for in Germany, and Gassenheimers had followed the emigration route to the United States successfully since at least the late 1840s. 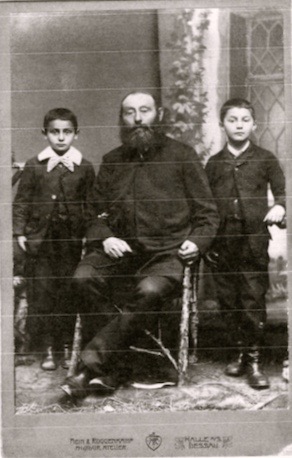 The Gassenheimers prospered in Themar: initially, Samuel’s younger brother, Salomon Gassenheimer, b. 1840, carried on the family business in Bibra and was also co-owner of Firma Gassenheimer in Themar. In 1892, the outlook was so good that Salomon and his family moved to Hildburghausen, not far from Themar, and established a agricultural machinery factory.

Samuel remained in Themar, building up his business into a company handling agricultural machinery, one that he could hand on with pride to the sons who lived in Germany. Samuel & Lotte completed their family in 1882 — Bernhardt left Germany before his youngest brothers — Sigmund (left in photo with father) and Rudolf were born!

The late 1880s/1890s saw a series of rapid changes in the Gassenheimer household. In 1888, 25-year-old Emma Gassenheimer married Simon Marcus and moved to his hometown of Dessau. On 19 February 1889, 48-year-old Lotte Gassenheimer died. Minna, Emma’s younger sister, was 16 years old and would have had her hands more than full with trying to care for four younger brothers and one sister. One hopes that other members of the community — both Jewish and non-Jewish — pitched in to help. On 26 May 1891, Samuel, age 54, married again — 33-year old Betty Frankson of Marisfeld. But a year later, Samuel died, and Betty became a single parent with five children under the age of 16 — Georg, Elise, Josef, Rudolf and Sigmund.

With his father’s death, twenty-three-year-old Julius Gassenheimer became director of the Gassenheimer company in Themar. In the mid-1890s, Julius married Joanna Joseph of Michelstadt in Hessen. Initially, the couple lived in Themar and a daughter, Lucie, was born on 9 November 1898. In 1899, Bernhardt Gassenheimer visited Themar with his wife and one son — did  he consider returning to Themar hoping to take charge of the family business? Or was it simply to visit the family?

Julius Gassenheimer’s decision to stay in Germany — that is, not to follow his older brother and other cousins (see, for example, the family of Samuel & Pauline Gassenheimer, in which all the children left) to America — marked a change in the Gassenheimer’s strategies to achieve socio-economic success. With the unification of Germany into one state, and the granting of constitutional rights to German Jews, prosperous Jewish families such as the Gassenheimers believed that Germany offered them as much opportunity at home as elsewhere. All of the children of Samuel and Lotte Gassenheimer born after 1865 chose to remain in Germany.

The family strategy became one of spreading out and establishing branches of the family business elsewhere. Julius, the eldest, was the first to leave: in 1900, he, Johanna and Lucie moved from Themar to Nürnberg where, according to the invoice at right, he set up a factory producing stoves and ovens as well as handling agricultural machinery. 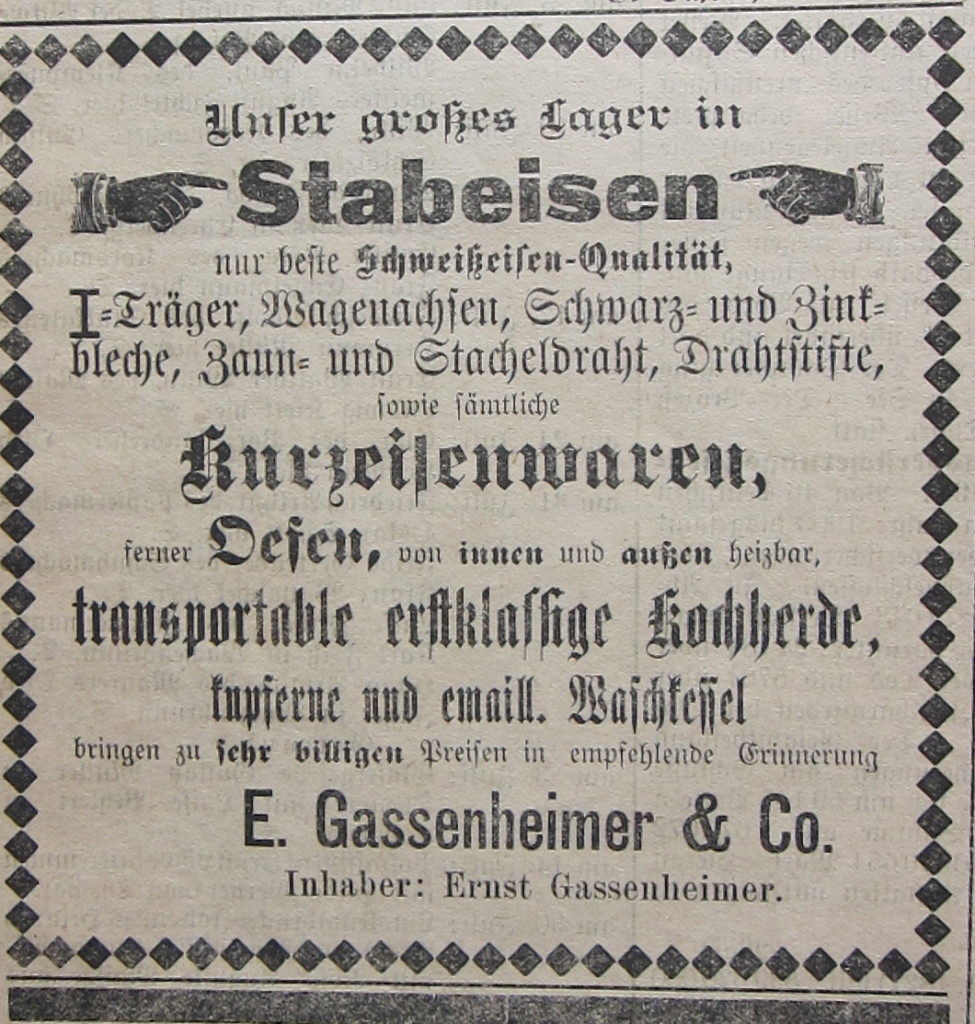 In 1900, thirty-year-old Ernst Gassenheimer took over leadership of the Themar business: Ernst was married — on 15 March 1898, he had married 20-year-old Rosa Rosenbacher of  Ebelsbach, Bayern — and was the father of two children, Herbert and Charlotte. Two more children were born after 1900: Albert in 1901, and Margarete in 1902. The E. Gassenheimer Co. of Agricultural Implements was one of the most successful businesses — Jewish or non-Jewish — in Themar, and the Gassenheimers participated widely in political and social activities in both the religious and secular worlds. The family lived in the fabulous house in Friedensstrasse 9 near the railway station and Samuel’s widow, Betty, lived with them.

The other siblings left Themar as they moved into full adulthood: Josef married Gertrud/Trude Cohn and moved to her hometown of Plauen in Anhalt-Saxony to establish a business. Elise married Max Ney of Halberstadt and moved there. Georg and Rudolf married two sisters who had moved from Berkach to Themar around the turn of the century; on 14 April 1901, 26-year-old Georg Gassenheimer married 20-year old Selma Schwab. In 1903, the couple moved to Halle/Saale where their daughter, Ruth, was born in 1904. Five years later, 28-year-old Rudolf married Selma’s younger sister, Thekla, and they moved to Görlitz in Schlesien. The youngest son, Sigmund, married Amalie Levy of Posen and they moved to Dresden in Saxony.

Over time a cluster of Gassenheimers settled in Halle/Saale: Minna moved from Coburg with her husband, Nathan Frankenberg, and their two sons, Siegfried and Walter (who died in November 1908). In 1912, Emma and her husband, Simon Marcus, moved from Dessau with their three sons, Paul, Siegfried and Erich. The final arrival was Elise, who moved from Halberstadt to Halle with her son, Hans, sometime after the break-up of her marriage. Ironically, Georg and Selma Gassenheimer, who had been the first to move to Halle, left the city and moved to Berlin in 1925.

The map below indicates where the children of Samuel & Charlotte Gassenheimer lived in the 1930s. 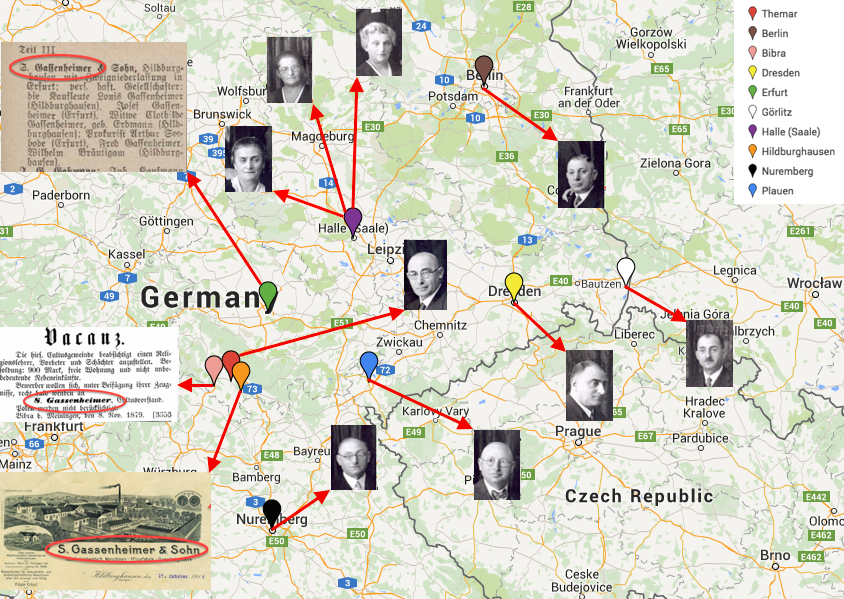 The family in the 1930s reflected natural change: Ernst Gassenheimer’s wife, Rosa, died in January 1925; Simon Marcus died later that year in November — his burial was the occasion of the group photo above, a fact that explains the sombre tone. Emma Marcus (née Gassenheimer) died in 1932. Betty Gassenheimer (née Frankson), Samuel’s second wife, died in 1935 and was buried in the Jewish cemetery of Marisfeld. In March 1937, Margarete Jäger, Ernst’s youngest child, gave birth to twins, Ruth and Johannes.

The Holocaust shattered the first generation of Samuel & Charlotte Gassenheimer’s children, namely, the eight children who were still in Germany when Hitler came to power. Only three were able to escape the horrors of the Holocaust: one son, Josef, died of natural causes in August 1938. Two sons — the eldest and youngest of those in Germany — were able to leave before the deportations began in fall of 1941.  Siegmund, the youngest son, and his wife Amelia, managed to escape from Dresden just six weeks before WWII began; they arrived in London “with a small amount of possessions and 10 marks each. They lived a in a house my mother [Ilse] who left in 1934 and uncle [Heinz] in 1933 found for them,” Barbara Mason, their granddaughter relates. 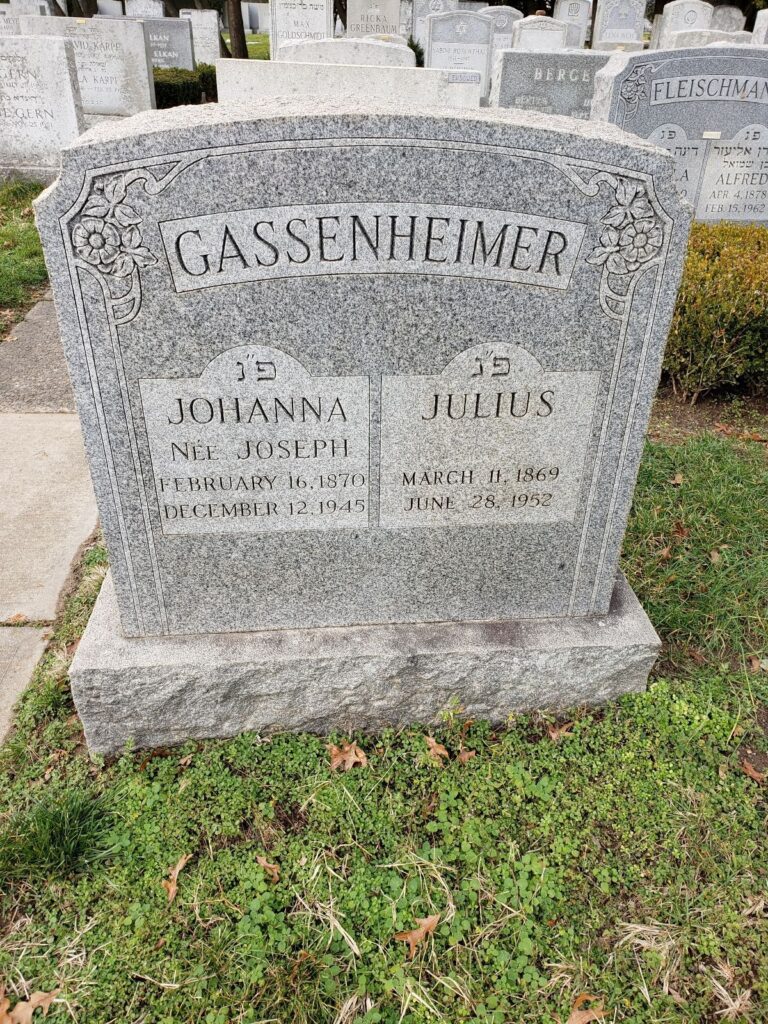 In June 1941, 72-year-old Julius and 71-year-old Johanna (née Joseph), left on one of the last boats to leave Lisbon. Johanna’s brother, Julius, sponsored their immigration. Their daughter, 41-year-old Lucie Reis, had died in 1940 (of causes unknown). Johanna Gassenheimer died in 1945, Julius in 1952. They were buried in Cedar Park cemetery in Paramus, New Jersey.

As in the previous century, the Gassenheimer family hoped to save the future of the family — particularly the second and third generations — through emigration, albeit forced and involuntary. And in this endeavour, the second generation of Gassenheimers achieved the goal of finding refuge. Twenty-nine (29) grandchildren of Samuel & Charlotte — and their families — were alive in the Third Reich: of those whose fate we know (26), one, Lucie Reis, died before the deportations began; twenty (77%) escaped the Holocaust, finding refuge in England, South Africa, the United States, Uruguay, and Brazil. Included in this number were Lucie Reis’s husband, Sigmund, and their two children, Werner (b. 1923), who left Germany for the United States in 1939, and Lori (b. 1928) who travelled with her father on the Trans-Siberian Railway to reach the United States in October 1949. Two — Charlotte Rosenbaum and her son, Walter, made it through the war in Barcelona, Spain, immigrating into the United States in 1946.

The information below comes from sources identified below as well as from family members throughout the world. We thank everyone and welcome further contributions, comments, and corrections. If you have any information or questions about the Samuel & Charlotte Gassenheimer family, which you would like to share, please contact Sharon Meen @ s.meen79@gmail.com or smeen@mail.ubc.ca. We would be pleased to hear from you.

The Nachkommenliste/Descendants List identifies the children and grandchildren of Samuel & Charlotte Gassenheimer, including the family formed by Bernhard in the United States. The information hints at the complex process by which a large German Jewish rural family made and implemented strategic decisions within the changing context of the status of German Jews.