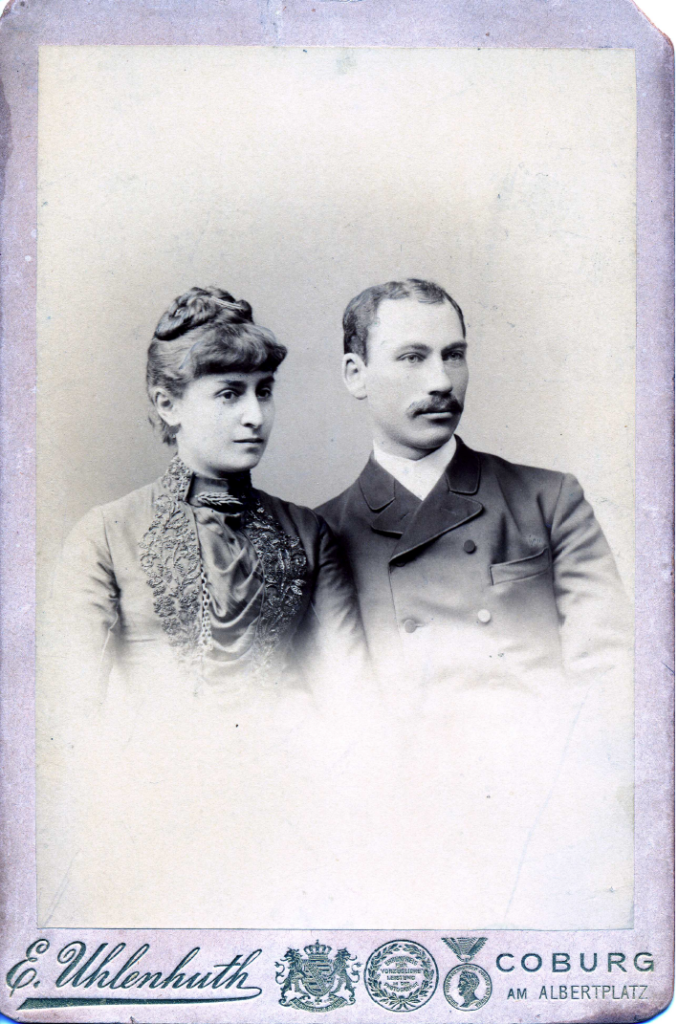 Simon was born in Gross Schulzendorf, a village of some 500 residents about 30 km south of Berlin. The Markus family, however, lived in Mittenwalde, a town of about 3,000 residents, of whom 28 were Jews. Meyer Markus died in Mittenwalde in 1902; we do not know about his wife.

Simon served in the army in 1881 and 1882 and his family preserved both his Soldbuch or Paybook (at right) and his Schiessbuch, a record of the shooting instruction he received. They tell us that Simon had changed the spelling of his last name from a ‘k’ to a ‘c’ although confusions clearly arose.

How and when Emma and Simon met is not known, but they were married and formed a family in Dessau in the 1890s — Paul, b. 1891, Siegfried, b. 1893 and Erich, b. 1896. Paul and Siegfried completed their High School graduation/Abitur at the  Friedrichs-Gymnasium in Dessau in 1912. 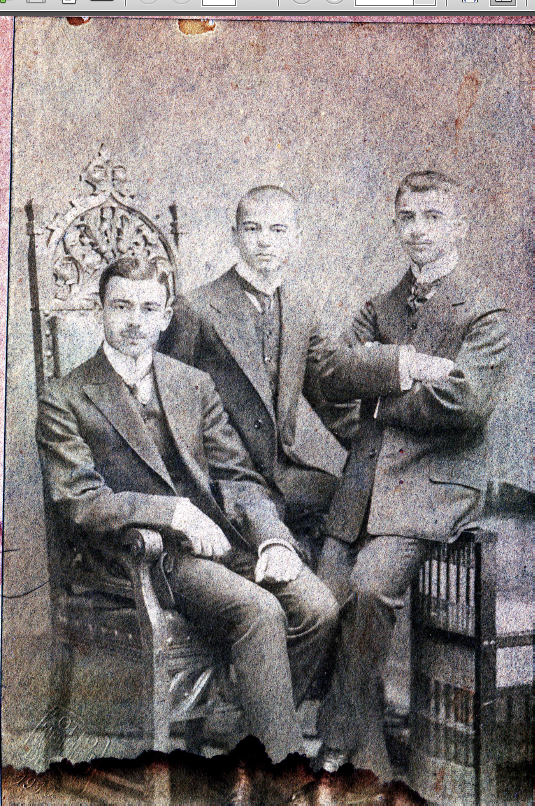 Various Marcus men fought in World War I. Simon Marcus’s cousin, Max, lost his life in the war on 17 March 1916. Emma and Simon’s three sons fought and returned home; the youngest, Erich, was wounded. In 1915, mother Emma acquired a Travel Pass that allowed her to travel within Germany for a two-year period starting July 1915. Given the wartime circumstances, she could not travel is designated no-go zones.

The Travel Pass was issued by the Halle an der Saale police authority and indication that Simon and Emma had moved from Dessau to Halle a/d Salle by then. 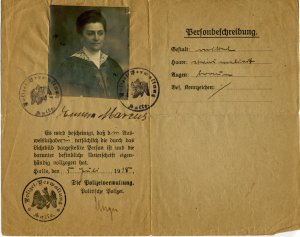 The 1916 Halle Adressbuch of 1916 is the first to have an entry for Simon Marcus. {The other Marcus listing is that of Max Marcus, Simon’s cousin, who was killed on 17 March 1916 in the First World War.]

Simon & Emma Marcus both died in Halle a/d Salle  — Simon in 1925 and Emma in 1932 — just as their sons were marrying and forming their own families. Paul Marcus became a medical doctor; Siegfried, a lawyer; and Erich took over the family business. The three brothers married and two of them formed families: Paul and Hertha (née Loeb) Marcus had a daughter, and Siegfried and Emma (née Becker) Marcus had three sons. 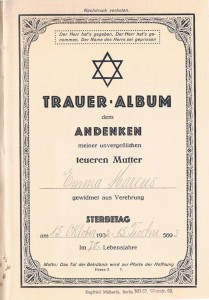 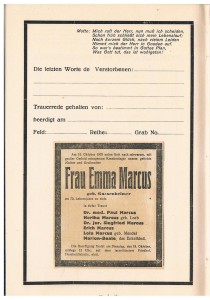 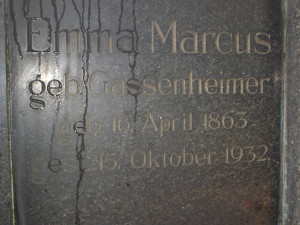 The Nazi Regime immediately threatened the lives and welfare of the Marcus families in Halle. The boycott of 1 April 1933 not only targeted Jewish businesses but also the practices of doctors and lawyers. The three sons were all able to leave Germany and two, Paul and Siegfried, escaped before the terrible events of the 1938 November Pogrom. Paul and his family left in 1938 for Montevideo, Uruguay. Siegfried left Germany alone in October 1938 and initially entered the United States with a temporary status; after some to-ing and fro-ing (see ‘Siegfried Marcus’), he obtained permission to immigrate into the United States on a permanent basis in 1941. Unfortunately, however, Siegfried’s family was only able to join him ten years later. Erich and his wife, Karola, immigrated into the States in April 1939.

Simon’s and Emma’s sons died in the 1960s and 1970s, but their children have established themselves in the countries which gave their fathers refuge: Uruguay and the United States. It is the grandchildren who have provided the information and images on this page. In fact, until they contacted us in June 2014, we did not know that there was an Emma Gassenheimer, the eldest daughter of Samuel and Lotte Gassenheimer. The City of Themar archives hold no trace of Emma, nor do the usual resources about Thüringen’s Jews such as the Siegfried Wolf database, Juden in Thüringen 1933-1945: Biographische Daten, 2000.

Simon’s history is more challenging to reassemble: Simon’s Pay Book from the Prussian Army in the early 1880s confirms his place of birth as Gross Schulzendorf, a village of 500 residents about 30 km south of Berlin. Then a 1938 document confirming Simon Marcus’s birth, signed by the Registrar of Zossen, adds another valuable piece of information, the name of Simon’s mother, Mina Liepmann. Seventy-five years after the document was issue, this piece of paper has provided Mina Liepmann’s great grandchildren with an important piece of the puzzle.

Below is the Nachkommenliste/Descendants List for Lewie & Hize MARKUS, Simon’s grandfather and grandmother. The Marcus grandchildren would welcome learning more about the family. Should anyone reading this page have additional information, please contact s.meen79@gmail.com. We would be pleased to hear from you.

* Simon Marcus spelled his name with a ‘c’ — Marcus. His older brother, Max retained the ‘k’.

Sources:
Many thanks to Dr. Bernd Ulbrich, who shares whatever traces are to be found in the resources of his city, Dessau, of families with connections to Themar.  Although few in number, the items provide us with important detail about the lives of the Marcuses in Dessau — first, a mention in the Jewish newspaper for Dessau, the Jüdisches Gemeindeblatt für Anhalt und Umgegend, Dessau, 28. Oktober 1932, of Emma Marcus’s (née Gassenheimer) death in Halle an der Saale. Dr. Ulbrich also provided the information about Paul & Siegfried and their Abiturs.