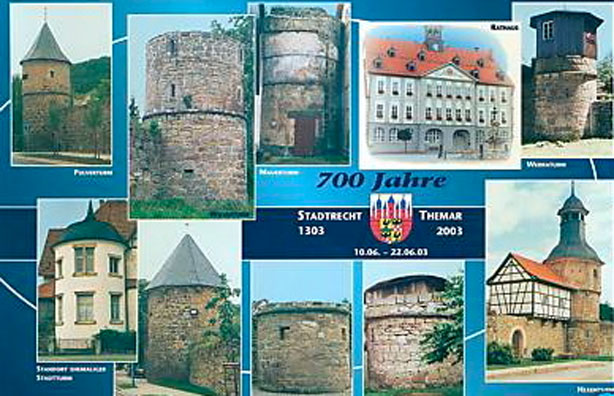 The Towers of Themar in the 21st century, at the 700-year city celebration, 2003. Credit: Photo Rös’chen, Themar

After the reunification of East and West Germany in 1990, Jewish Themarens, their children and grandchildren began to visit the city with greater frequency. Marion Sander, the daughter of Hilde Frankenberg Sander and her husband, Louis Sander, and the brother of Norbert, made several visits and remained in written contact with friends. (In 2007, two students at the highschool in Hildburghausen prepared their graduating essay about the Sander and Frankenberg families.) Robert Strauss, the son of Henry Levinstein, visited the city in 1996 and wrote about it in an article for salon.com. The Müllers visited frequently as did members of the Sachs family.

On April 10, 1995, a memorial, initiated by Fritz Stubenrauch and supported by many others in the city, was dedicated to the Jews of Themar. The inscription reads: “We remember the Jewish families of Themar and the victims of all dictatorships — the worth of man is unassailable.”