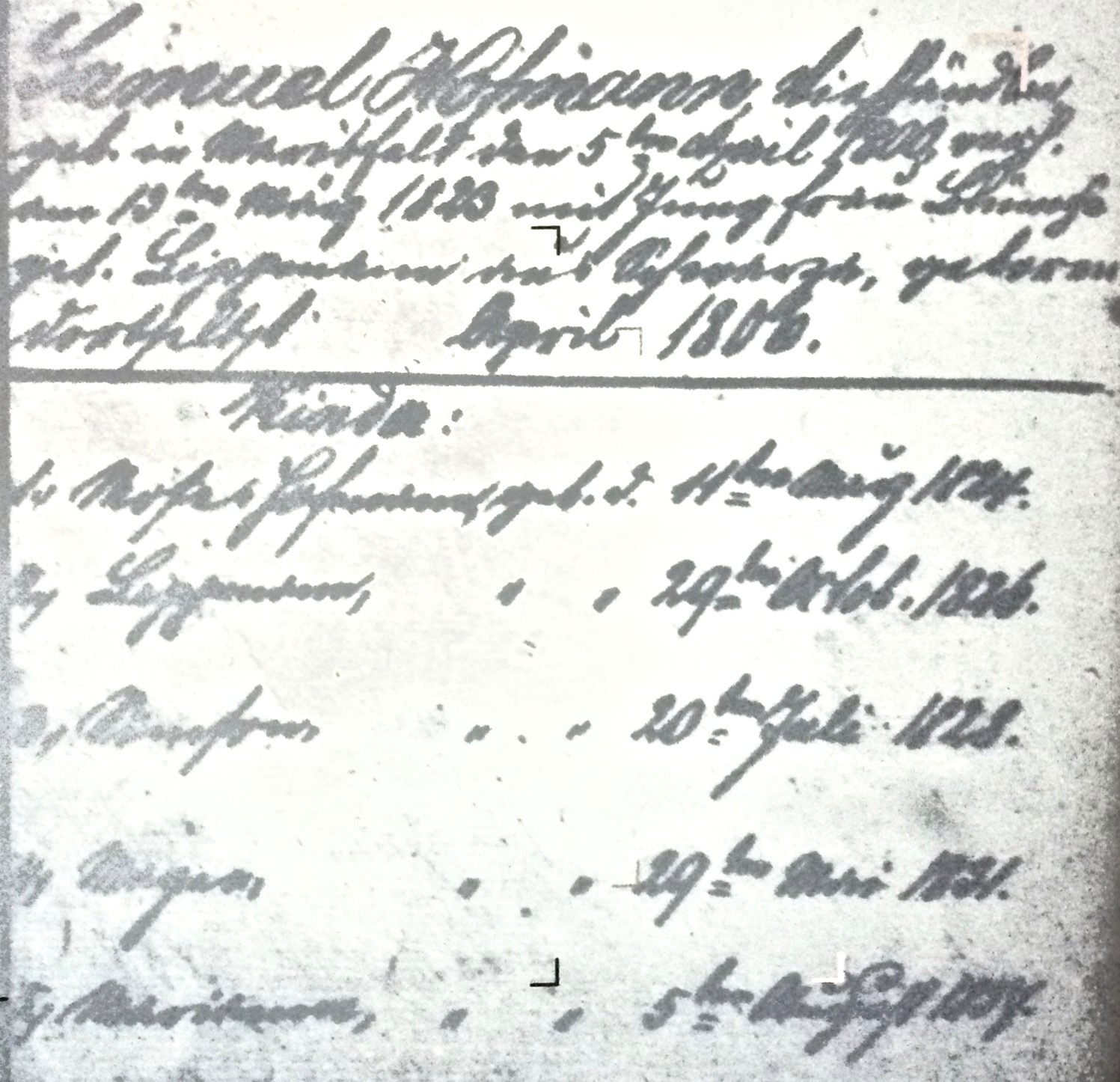 The Hofmann family of Samuel and Blümche was one of the founding families of the Jewish community of Themar. Like other families such as the Bärs, Frankenbergs, Müllers, and Walthers, the Hofmanns moved from the village of Marisfeld to Themar in the mid-1860s when the law allowed them to do so and when they realized that the larger urban place would offer more opportunity for their growing family. As well, children of Samuel and Blümche married into other major core families of Themar such as the Frankenbergs, who also came from Marisfeld, as well as the Sachses, who came from Berkach.

But the Hofmann family was not what we call a ‘core’ family of Themar; that is, one that was in Themar at the founding of a Jewish community and was still there in the last years of the community as it was extinguished between 1939 and 1943.  The Hofmann family moved on from Themar completely; in other families, such as the Bär/Baers and Gassenheimers, some children moved to other, usually larger centres, but one member remained in Themar. This did not happen with the Hofmann family; twenty years after their arrival in Themar, there was no longer a member of the family in the Kleinstadt.

Samuel Hofmann was born in Marisfeld in 1800; his parents’ name and circumstances of their presence in Marisfeld are not known. In March 1823 he married Blümche Lippmann from Schwarza. They had four children in Marisfeld, Simson, b. 1823, died at 8 years of age.

We know most about the family of Lippmann Hofmann, born 1826. He married Riecke (Friederike) Sachs of Berkach in 1856 and initially they lived in Marisfeld. At some point after the birth of Frieda in 1865, the family moved from Marisfeld to Themar, one of several Marisfeld Jewish families who moved from the village to the Kleinstadt in the mid-1860s. In Themar, Riecke bore another 5 children. 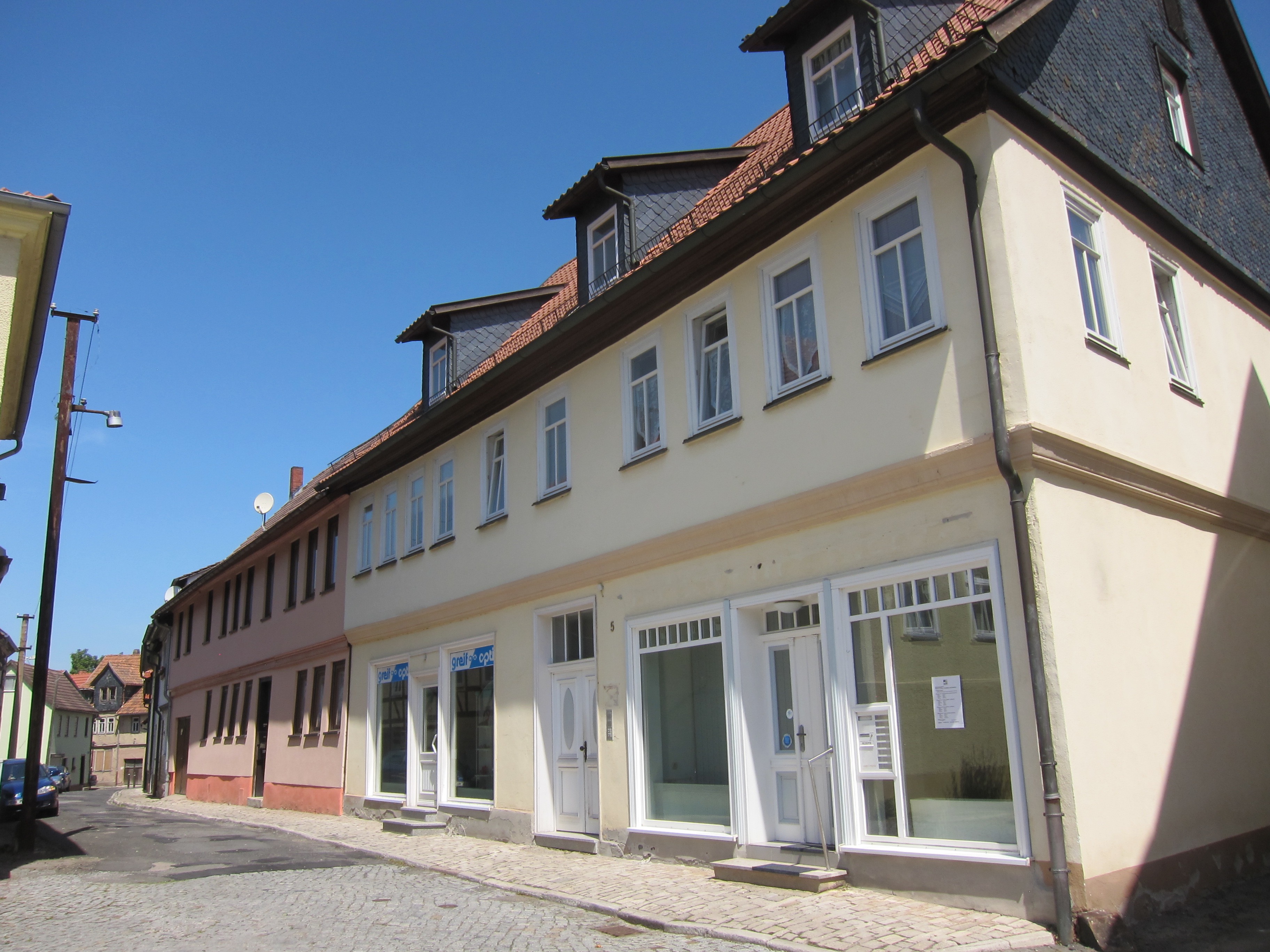 In 1875 the Lippmann Hofmann family lived at Traubengasse 117 (the house on the corner in the photo). The Einwohnerliste/ List of Residents stated that 12 people lived at this address: they were, we believe, Lippmann und Riecke, some of their children, and Lippmann’s parents, Samuel and Blümche.

Lippmann was identified as a trader/Handelsmann.

Samuel Hofmann died in 1878, and four years later, in 1882, his wife Blümche also died. Both died in Themar

In November 1883, Lippmann and Riecke Hofmann, and some of their children — we do not know exactly how many — moved to Jena. There, they lived at Löbdergraben 14. Son Max died on 25 September 1886 and was buried in the Jewish cemetery. (Photo). Lippmann Hofmann died in 1904.

Salomon Hofmann, Moritz’s younger brother, and his wife, Frieda née Plaut, also lived in Jena. They lived at Löbdergraben 34 and ran a real estate business and a tobacco products business at Lutherstraße 9. On the 28 November 1909, their one child, Paula, was born. In 1910, Salomon’s mother, Riecke, moved in with Salomon, Frieda, und Paula. Riecke Hofmann died in 1917 in Jena.

In an 1977 interview with the United States Holocaust Museum, Paula Hofmann, Salomon’s and Frieda’s daughter, described the life of her parents and grandparents. As well, Ulrike von Wölfen wrote about the family in her chapter (in German) ,,Zwei jüdische Biographien: Eduard Rosenthal und Paula Ehrenberg,” Paula and her husband, Heinz Ehrenberg, were able to flee Germany in 1940 for the United States. From there, they tried to bring Salomon and Frieda to America but, as the card in the Jewish Transmigration Bureau indicates, their attempt failed; the file was closed in June 1942 and the Ehrenbergs were refunded their deposit. 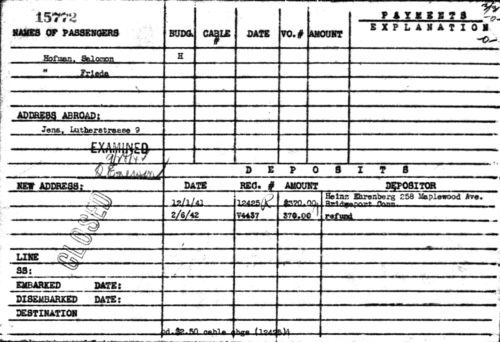 From May until September 1942, Salomon Hofmann was the contact person between the Nazi authorities and the Jewish community of Jena. On 20. September 1942  Salomon and Frieda Hofmann were deported from Jena to Ghetto Theresienstadt; two years later, they were transported further to Auschwitz where they were probably murdered upon arrival.

On 7 May 2008, Stolpersteine were laid for Salomon and Fried (née Plaut) Hofmann in Lutherstrasse, Jena. 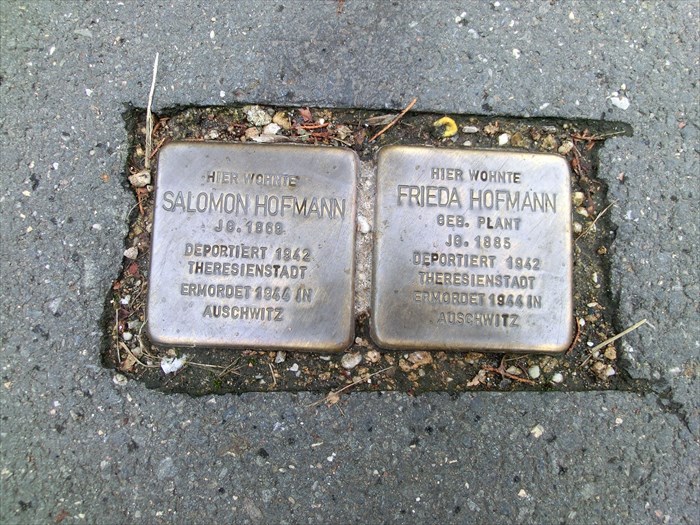 The Descendants List below identifies members of the family of Samuel and Blümche (née Lippmann) Hofmann. It is complied from the Jewish Registers of Marisfeld and Themar. The Matrikel/Jewish Registers, which were read in microfilm format, are poor as the copies on this page illustrate. But that is what we have at the moment and we are grateful. Of much importance in the case of this family is the evidence in the Matrikel of Marisfeld that the family came from Marisfeld, not from Mansfeld in Saxony, as several sources, such as the German National Archives, Memorial Book, entry does.