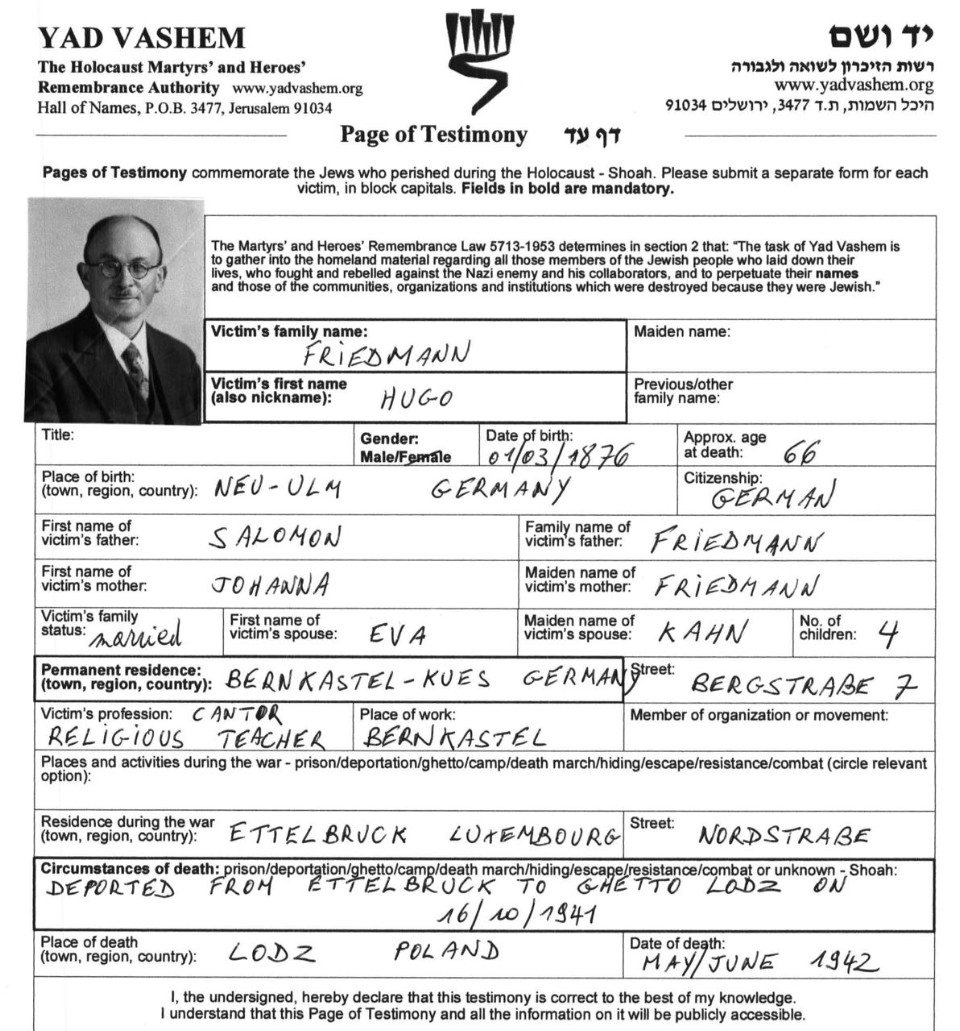 16 October 2011 — It is 70 years since the first deportation of members of Themar’s Jewish community to the ‘east.’ On this day in 1941, Hugo and Eva (née Kahn)  Friedmann were deported from Luxemburg-Trier to the Ghetto in Lodz, or Litzmannstadt as it had been renamed by the Nazis.

The Friedmanns lived in Themar in the first decade of the 1900s and their four children — two daughters, Johanna and Sitta, and two sons, Friedrich and Hugo — were born there. Hugo Friedmann came to Themar in the early 1900s as the Jewish religious teachers, the Lehrer, and the family lived in the apartment over the synagogue in Hildburghäuser Strasse 17. The family left Themar in 1909 to go to Bernkastel-Kues where they remained until the late 1930s or early 1940s.

The Friedmanns were on the first transport of German Jews to the ‘east’ authorized by Hitler in mid-September 1941. Hitler had changed his mind and given the green light to top-ranking advisors, such as Joseph Goebbels in Berlin and Karl Kaufmann in Hamburg, to proceed full steam with the systematic, centrally controlled deportation of the Jews from the Altreich (Germany and Austria) and the Protectorate (Bohemia and Moravia). As well, Hitler agreed that forced migration east could happen while the war with Russia continued rather than only at its conclusion — although he still hoped that the two events would coincide.

Hitler’s closest advisors rapidly formulated and implemented the plans. The first transports were to go to Litzmannstadt Ghetto. As Himmler relayed the orders:

Less than one month later — on 15 October 1941 — the transports to Litzmannstadt Ghetto began: a transport left Vienna carrying over 1000 Jews. The next day, October 16th, the first transport from Germany left from Trier on the western border of Germany — this transport included Jews from Luxemburg, among whom were thirteen members of the extended Friedmann family: Hugo and Eva Friedmann as well as Eva’s younger brothers, Emile, b. 1879; Albert, b. 1895 and his wife Ella (née Kahn), and their three daughters, Renee, Margot and Yvonne; Otto Berman Kahn, b. 1901, his wife Paula (née Kahn, sister of Albert’s wife), and their three children, Julius, Andree and Marcel, were also deported on the same transport to Litzmannstadt. All were murdered, be it by starvation, disease, weather, work, or possibly in the first gassings that took place at Chelmno.

For a full description of this transport, see:
Yad Vashem, International Institute for Holocaust Research, “Transport, Traian Da 3 from Luxembourg, Luxembourg to Lodz, Ghetto, Poland on 16/10/1941.”