8 May 1945 — Liberation of Ghetto Theresienstadt 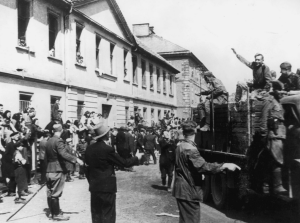 “On May 8, 1945, a young soldier rode on his horse into the courtyard of the barracks in Theresienstadt bearing the greatest gift — freedom for the barely alive survivors of German concentration camps. ‘You are free, you can go home now to your fathers and sons, husbands and brothers, you are free!” — Bronia Sonnenschein 1985

Bronia’s journey through the Holocaust had taken her to Auschwitz II-Birkenau Death Camp in Poland, to Stutthof and then the Dresden-Bernsdorf & Co. In spring 1945, she had been forced on a death march from Dresden to Theresienstadt, one of a wave of 13,000 who flooded into the ghetto in the last days of the war.

29.738 survivors were in Theresienstadt at liberation. Among those who were freed were ten members — nine adult women and one young boy —of the Jewish families of Themar:

One other member of the Themar Jewish community, Hulda Grünbaum, née Schlesinger, had been freed earlier in 1945 when 1200 Jews were taken from Theresienstadt to St. Gallen in Switzerland.

In July 1950, Bronia arrived in Vancouver, British Columbia; after raising a family and a career, she committed herself to ensuring that generations of adults — such as myself — and young people alike would hear her witness to the Holocaust. As she wrote in 1997, “we have to keep the memory of the Holocaust alive so that it may never happen again.”

We remember these ten women and one man — and Bronia Sonnenschein whose spirit, I hope, infuses this website. 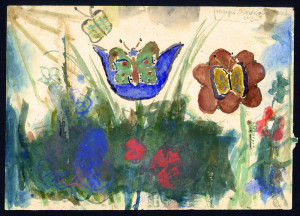 Painting by child in Theresienstadt Ghetto.