Germans, both Jewish and non-Jewish, responded to the call to arms with enthusiasm. Ten thousand Jewish males volunteered to serve and their overall contribution to the war effort was remarkable: “100,000 Jewish men fought in the German Army, Navy, and Colonial Troops, and [at least] 12,000 remained on the field of honour.” Among those who fought for their Fatherland were at least twenty-five (25) men related  the Jewish families of Themar. Of this group, three — all members of the Josef & Hulda Kahn family — did not return home.

The War affected the Jewish families of Themar as it did all families of the small city. Sons & grandsons — or cousins and/or relatives through marriage — entered the war. Its end brought new people to town — it seems probable that Paul Rosengarten, returning from Russia, came to Themar and simply decided to stay. He met Berta Schwab, married and soon the Rosengarten family was part of the core Jewish families in Themar.

The Honour Roll below identifies thirty-five (35) men of the Jewish families of Themar who fought in WWI and defines their relationship to the families. We also present some of the sources that have assisted in the search for traces. We thank the families for sharing with us their precious documents and photographs.

At the moment, we do not have any information about the direct involvement of the Jewish women of Themar in the war effort, although we know that their informal role would have been significant. If anyone visiting this page has information to contribute we would welcome it. Over the next while, we will be posting more pages about World War I and how it affected the Jewish community of Themar.

The Family of Samuel u. Jette BAER née Walther

The Family of Noah Grünbaum

The Family of Josef & Hulda KAHN, née Walther
Two sons of Josef & Hulda Kahn were killed in the war, exactly where is unknown. Their names were engraved in the WWI memorial (see image at top of page). The memorial was destroyed in WWII, but Fritz Stubenrauch ensured that the plaques bearing the names were saved and they are now to be seen in the Friedhofskapelle.

The Kahn family suffered other losses:

Other Jewish males of Themar families who may have served in the war include:

And on 9 November 1918, the First World War ended. Themar honoured its dead in this elaborate war memorial.  Behind it stood the home of the Meier & Karoline Mayer, Frieda, Albert & Flora Wolf; across from it was the Adolf Kahn Metzgerei, and the home of Elsa and Marcus Rosenberg. 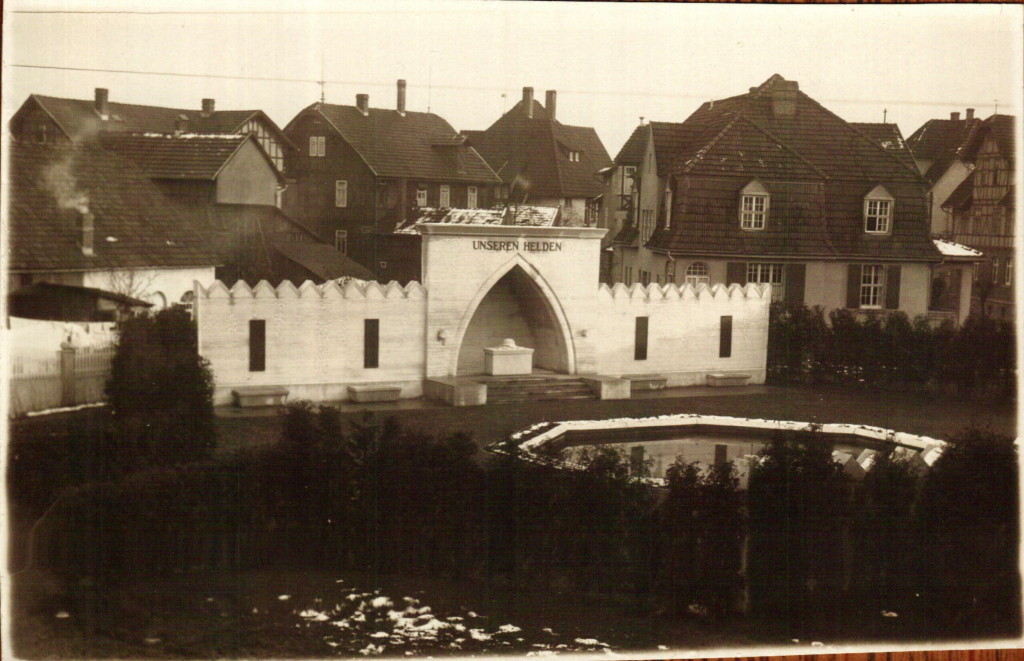