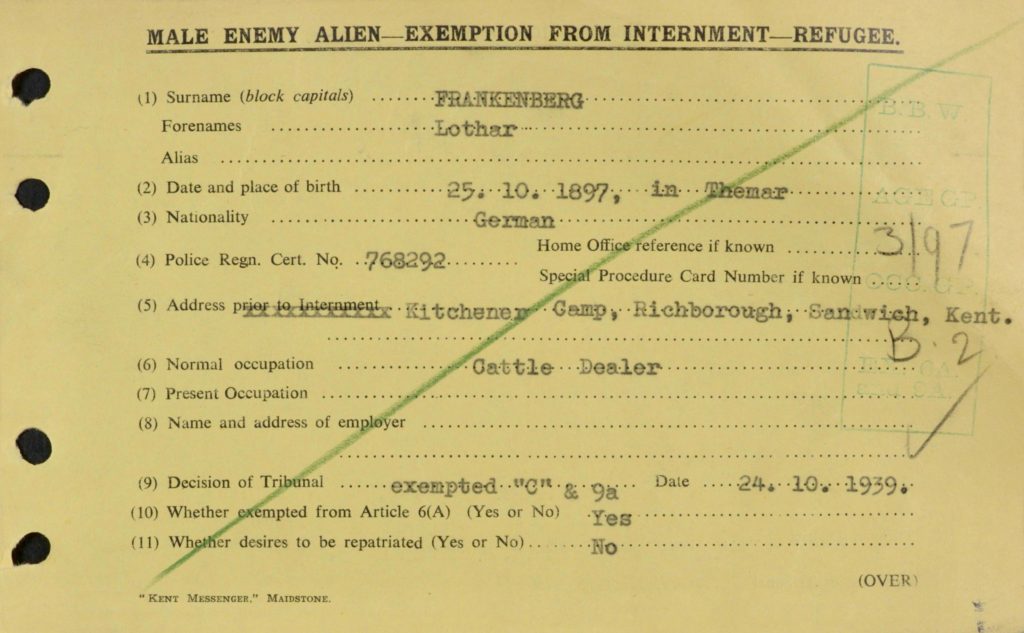 On 3 September 1939, the British government declared the 37 members of Themar’s Jewish families in Britain to be “Enemy Aliens.” Lothar Frankenberg, a cattle dealer from Themar, was one of them.

In the much larger context, Lothar and his fellow Themarens were part of the 80,000 potential ‘enemy aliens’ in the country, that is, Germans and Austrians who might conceivably support Germany as spies. 55,000 of these were refugees from Nazi Germany and most of them were Jewish.

After the war started, England established tribunals to determine which German and Austrian nationals over the age of 16 posed a threat to national security. The tribunals were hastily convened and informal affairs that used arbitrary guidelines, prompting criticism from many. In his 1940 book, The Internment of Aliens, François Lafitte argued: “We [should] discriminate not between Britons and aliens or ‘enemy aliens’ and ‘friendly aliens’ but between those who stand for freedom and those who stand for tyranny in every country. … The real ‘aliens’ are the ‘Nazis of the soul’ of all countries including our own.”

On 24 October, 1939, Viscount Cobham, Parliamentary Secretary of State for War, answered a question in the House of Lords on internment saying that the government had decided not to indulge in mass internment. In the end, the tribunals, generally presided over by a county court judge or King’s Counsel, heard 73,000 cases. Only 569 were deemed “Category A” – a “significant risk” – and immediately incarcerated. The 6,700 classified as “Category B” were designated as “friendly enemy aliens” and a “slight risk.” They were restricted to travelling no more than fives miles from their homes and were forbidden to own cameras and bicycles. Approximately 66,000 were classified as “Category C” and judged to pose no risk to national security. Within this group, 55,000-60,000 were Jewish and declared to be “refugees from Nazi Oppression.” 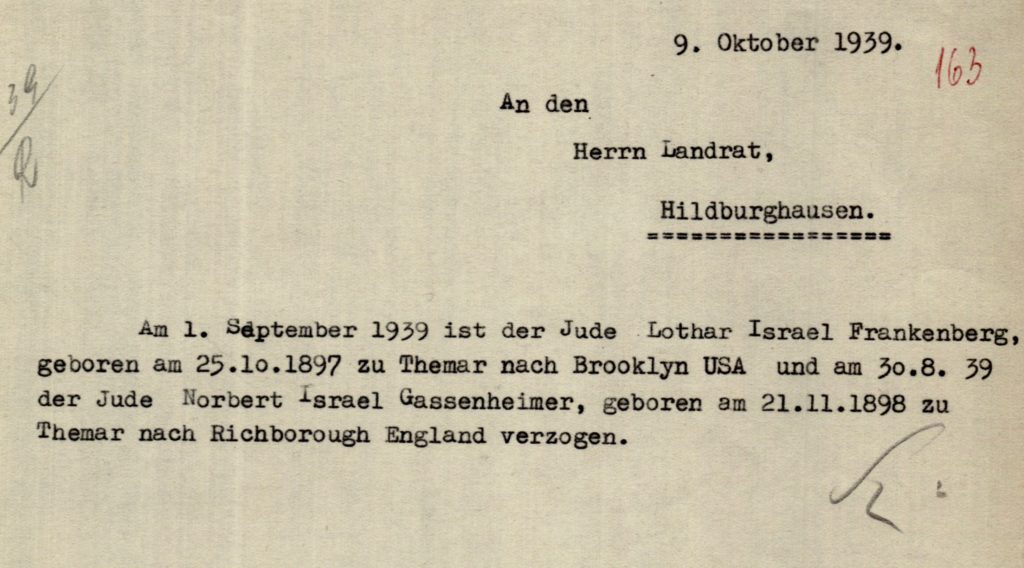 Eighty years on, the Internees Index Cards have become a valuable source to researchers of German-Jewish family history. Lothar Frankenberg is the perfect example: Initially, Themar mayor Dr. Fritz Schorcht told us (in the 9 October 1939 memo to a higher authority in Hildburghausen) that Lothar Frankenberg, b. 25.10.1897 in Themar, had left for Brooklyn, USA on 1 September 1939. But the search of ship manifests turned up nothing and the trail ran dry. Suddenly, however, the Internee Index Card completely contradicted Schorcht. Lothar had not left for Brooklyn—while that may have been his end goal, he first achieved a transit permit into Britain and from there he was deported to Canada as an enemy alien.

Ironically, the Jews in Themar knew more than Mayor Schorcht; in her letter to son Willi on 1 September 1939, Klara Müller wrote: “Lothar [Frankenberg] is in Berlin and has obtained his visa and Herbert Gassenheimer [the other man mentioned in Schorcht’s memo] is already in England.” What Klara’s note also makes clear is how truly nip and tuck Lothar’s entry into Britain was. He may well have entered Britain just as it declared war.

Tribunal Index cards exist for most of the members of Themar’s Jewish families: the one exception is Norbert Müller, son of Sebald and Laura (née Jüngster). He was under 16 years of age when he arrived in England as part of a Kindertransport in early September 1939 and was therefore not required to meet with a tribunal. The National Archives; Kew, London, England; HO 396 WW2 Internees (Aliens) Index Cards 1939-1947 can be found in the databases of both Ancestry.com and findmypast.com.