September 6, 2010 was the 70th anniversary of the landing of HMT Dunera in Sydney Harbour, Australia. The ship carried close to 2000 Jewish refugees of Nazi oppression from Germany and Austria, plus about 500 German Prisoners of War and Italians. Owing to the appalling treatment of the refugees on the 8-week voyage from England, this voyage is now known as The Dunera Scandal.

We knew that one Themaren, Adalbert Stern, was on the Dunera — and because every story expands our understanding of the Jewish experience in the WWII years — I and a UBC student, Caroline Harris, set out to find out more about the internment of Jewish Germans in Australia between 1940 and 1943.  Unexpectedly, we found a second Themaren, Julius Kahn, and the Australian records gave us much additional information about the whole Kahn family of Themar.

The finding of Julius Kahn in one of the many lists in the National Australian Archives Dunera files and available online. Source: National Archives of Australia.

Source: Roß in Nothnagel, Juden in Sudthüringen, 1995. Julius Kahn “found refuge in England.” The entry above Julius’s name is that of his niece, Johanna Haaß, and, in 1995, her fate was unknown. In 2011, we know that she and her twin brother, Günther, both survived the war.

From the German records we knew that Julius, born in Themar in 1896, was a descendant of two of the original Jewish families of Themar, he had three sisters and five brothers, as well as assorted nieces and nephews. We knew that two brothers, Friedrich Daniel and Leonhard, had died in WWI. Of these, it was known that three members survived through emigration, as well as one Christian wife and four children of Jewish/Christian parentage. We also knew that Julius had left Germany for England. But there the information stopped. 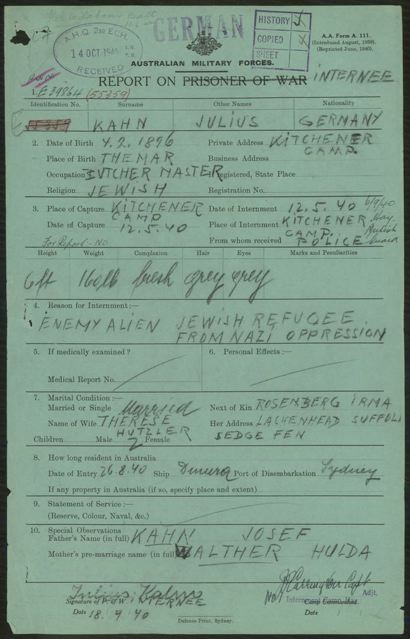 This document told us the name of Julius’s wife, Therese Hutzler, and the fact that he and Therese had two daughters. Further research sadly told us that Therese and her daughters were deported to Izbica in March 1942.  Source: NAA: MP1103/2, E39864

What we learned from the Australian records told us much more. We now know that Julius was a master butcher, as was his father, Josef, and his brother, Adolf.

In the 1920s, Julius moved to Nürnberg where he married Therese Hutzler and had two daughters. He left for England in 1939, clearly hoping that Therese and the girls would be able to follow him. But WWII began and all Germans, Jewish and Christian, were declared enemy aliens; in May 1940, as the panic about a possible German invasion increased, Julius was arrested, held in Kitchener Camp, and shipped off on HMT Dunera. When the English government recognized its error and began a process of repatriation of the refugees in 1941, Julius was not initially eligible — only those who were married and whose families were already in England went to the to top of the list. Julius’s wife, Therese, and daughters were trapped in Germany and deported to Minsk in March 1942; when Julius might have learned of their deaths, we do not know. The records indicate that Julius was granted parole in 1943 and he remained in Australia after the war, moving to the Sydney area, where he died in 1965.

The story of Julius Kahn doesn’t necessarily stop here as contact with the Australian historians of the Dunera Scandal may lead us further. But as complete a profile as we have of Julius now is here.