In 1983 Manfred Rosengarten, living in California, drew this city map of Themar from memory — without the aid of any other map, the Internet or Google Earth. When he included the map in his Photo Album, he wrote: “A drawing of the City of Themar/Thür. Earlier in the district of Hildburghausen now within the administrative district of Suhl. Drawn after 48 years completely from the memory of Manfred Rosengarten.”

Manfred wanted pictures of Themar for a photo album he was creating for his children and grandchildren. The sister of a California friend, who lived in Dresden, was willing to drive to Themar and take pictures. To show Gisela exactly which photos he wanted, Manfred sat down one evening at 9.00 p.m. and worked through the night to 4 a.m. The resulting map was of the Themar he had left in 1936, exact to the smallest details.

When looking at the map at the city’s website or even at “google earth Themar,” you can see the accuracy of the map.

Manfred used numbers for 76 sites on his map — many are the homes of his former school chums, others are commercial buildings, city buildings, and/or playgrounds. As with the city map, the list of sites also came entirely from memory. He identified other sites by names; we have added numbers to these sites and they have been added to the list. 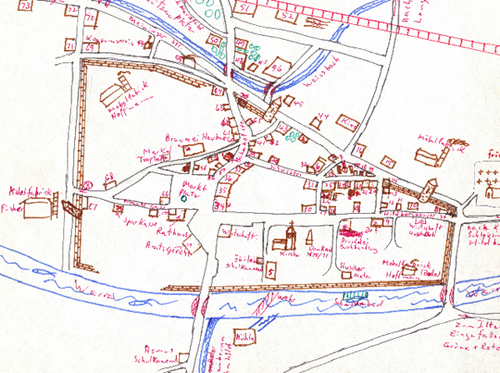