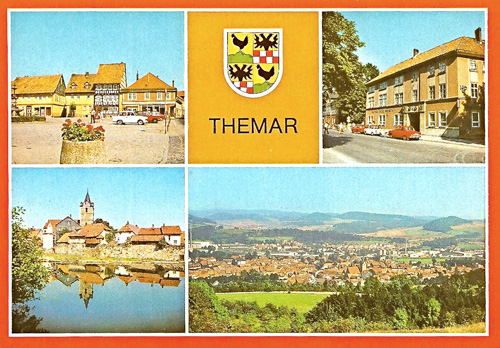 In 1983 Manfred Rosengarten, 62 years old and living in Martinez, California, decided to create a photo album for his children and grandchildren to show and tell them about Themar, Thüringen, his home town, which he had left nearly 50 years earlier. A few pictures had travelled with him and his family to Shanghai in 1939 and subsequently to California in 1947. But Manfred wanted more pictures of Themar for his album and when the sister of a California friend, who lived in Dresden, volunteered to go to Themar and take photographs, Manfred had his chance. In order to show exactly which photos he wanted, Manfred sat down one evening at 9.00 p.m. and worked through the night to 4 a.m. The resulting city map — of the Themar he had left in 1936 — was exact to the smallest detail. In due course, Manfred received the photographs and, as an extraordinary result of the picture-taking expedition, he reconnected with the non-Jewish school chums of his childhood — and received even more photographs and postcards for his album. As you will know if you have browsed through other parts of this website, it is the photo album and Manfred’s correspondence with his former schoolmates that prompted this project of reassembling of the Jewish community of Themar on the web.Manfred’s intent was to “try and recreate” — from memory — “the story of a little town, its people, its history, its Jews (as best I can), and even some of its geological and anthropological features. Throughout the story,” he wrote, “I will report about some Jews in connection with the pictures of their houses. He succeeded and the result is a quite singular document. The photographs, the postcards, and the commentary offer a fascinating glimpse of life in the small city Themar during Manfred’s time, when the Jewish community played a lively role. But the photographs taken in 1976 and 1983 also tell us much about how the city fared during the Communist era.

The presentation of the text and photographs here differs from Manfred’s original design, in order to make the content more accessible to a larger audience: for example, chapters have been created for each area of Themar as Manfred moves us through its streets, squares, and lanes. All the photographs now have numbers and captions, dates, and credit lines. All map sites are now numbered, and are referenced in the captions and the text. We have enhanced the size of the photographs, an aspect particularly welcome with the photographs of people. As well, information in the text, particularly about people, has been clarified and updated wherever possible, either with an in-text [xxx] or with an [Editor’s Note], and the sources are either provided in links or cited at the end. Manfred died in 1987, before the reunification of East & West Germany and before Google, Google Earth, etc., but I believe that Manfred would appreciate how technology is bringing his memories and stories to a larger audience.

The original photo album is part of the permanent collection of the Rosengarten Collection in the Vancouver Holocaust Education Centre Archives, and is posted here with the permission of the Centre.

I would like to thank Manfred’s son, Andrew M. Rosengarten, for his generous support in bringing his father’s photo album to you.

Chapter 1: Introduction
Themar/Thüringen, Kreis/County Hildburghausen, Regierungsbezirk/Administrative District Suhl is the little town where I, my brother, my mother and uncle Oskar were born. It was called Tagamar in 800 A.D. From my memory, I will try and recreate and report the story of a little town, its people, its history, its Jews (as best I can), and even some of its geological and anthropological features.
It seems that the story of Themar goes back, many more than a 1000 years. I heard a story of an ancient village in a lake or swamp, which was built on stilts. The story of the River Werra Valley in that area is one of earth movements and floods. In 1595, a giant slide buried a little village named Dörfles (there is another Dörfles-Esbach near Coburg south of Themar, but this is a different village) and created the “Eingefallener Berg” or “Collapsed Mountain.” On the other end of the valley, past the village of Henfstädt, the highway made a wide turn around a ridge, probably a glacial moraine, which at one time was probably like a dam for the river. On the other side of the ridge, the river had broken through the dam, and so the valley was drained. This break was called the “Nadelöhr” or “Eye of the Needle.” It seems the valley was an important trade route. 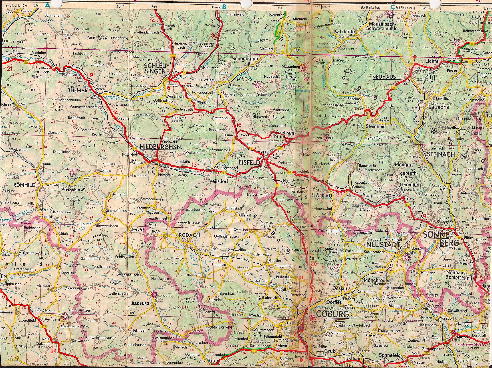 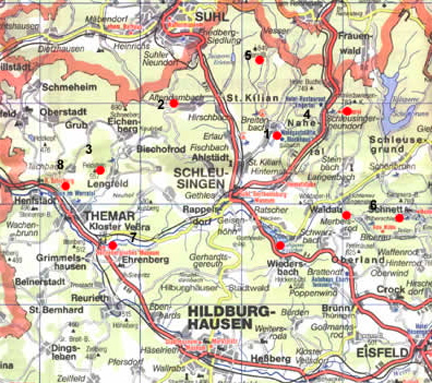 above Henfstädt is the ruin of a Robber Baron’s castle called the “Osterburg.” From the top of the castle keep, you could see quite a ways in both directions. As children we used to play war in the old ruin. Climbing the keep was not without danger. We had soda bottles with wire tops, we put a little carbide into them and when we wanted to use them, we added a little water from a canteen, closed the bottle and threw it. It went off like a hand grenade. Why nobody ever got hurt, I still don’t understand. We also used this method to fish. It stunned but did not kill the fish, which gave us enough time to catch them. The carbide came from our bicycle lamps.Now about another story: in the forest near the village of Grub to the north of Themar (the schoolhouse was used by U.S. troops at the end of World War II as a hospital), were found so-called “Hünengräber” or “Graves of Giants.” Huge boulders were used to build a burial chamber and the skeletons found there were of a remarkable size. There was a display in the Museum in Meiningen.

To go back to the floods, I remember some Loo Loo’s. During the Middle Ages, a baker’s daughter drowned in one of them and in her memory he created an endowment fund, so that on her anniversary, every school kid in Themar got a giant brezel/pretzel. I wonder if they still do it.

In about 1859 or 1860, the railroad came up the Valley. During floods, long timbers were floated down the river to the [North] Sea. Themar itself had a reputation as a furniture manufacturing center, most of it was made by hand and quality craftsmanship was very important. It seems they are doing all right, even now.

Now, a little about the Jews of Themar. Reports of Jewish merchants in the area go back to the 10th century. The best source of info that I can think of, is the Encyclopaedia Judaica, under “Thüringen.” Only one story not included is that, during the Mongol Invasion — which of course was blamed on the Jews — the “Landgraf” or “Count” of Thüringen took a stand in defense of the Jews.

My grandfather [Abraham Schwab, b. 1860 Marisfeld, d. 1937 Themar] and his parents [Elias and Betty Schwab] came from a little village called Marisfeld. Throughout the story, I will report about some Jews in connection with the pictures of their houses. About others, the following: the Frankenberg family had a cattle dealing business. A man named [Louis] Sander from Xandeu on the Rhine married one of their daughters, [Hilde, b. 1890 Themar, d. 1938 Würzburg] and their children were named Bubi (Norbert) and Marion. Norbert had epilepsy and when he had an attack, especially during school hours, I was called out of class to help him. I had learned to take care of my cousin, Egon Schwab [b. 1922 in Schleusingen, d. 1933 in Schleusingen], who also was epileptic. He was uncle Oskar’s son and died very young in an institution during a seizure.

On the road to Wachenbrunn [southwest of Themar] lived an old Jewish man and his wife, named [Max and Alma] Bachmann. He served two hitches in the French Foreign Legion and fought in North Africa, Madagascar, and in Indochina near Hanoi along the Red River. That was how long I have known about Vietnam. Max Bachmann had a habit of coughing and spitting. Once he did this in front of a display box of the antisemitic paper, Der Stürmer. He was arrested and charged with something like insulting the Nazi Party. He got off because enough people testified that he always coughed and spit without thinking. For people to do this was rare in those days.

There was another family named Müller, also related to my Aunt Frieda [Frieda Schwab, née Steindler, was the wife of Oskar Schwab]. They [Leopold and Pauline Müller, née Steindler] had a son named Julius, he made it to Denmark, I don’t know what happened to any of them. Julius was the first to teach us Hebrew songs, he started the idea of Zionism in us.

[Editor’s note: Leopold and Pauline Müller had three children all born in Themar: Franziska, b. 1909, Manfred, b. 1913, and the youngest, Julius, b. 1919. Leopold Müller died in 1924; Julius went to Denmark in the mid-1930s, to Sweden in October 1943, but returned to Denmark after the war where he married and had two children; he died in 1992. Manfred Müller died in 1932 in Themar and was buried in the Marisfeld cemetery. Franziska Müller Neumann was deported to Auschwitz in 1943 with her two sons. Pauline Müller was deported in 1942.]

Lehrer Levinstein drowned himself in the Werra, after he had been released from Buchenwald after Kristallnacht, he never even went home. His son Heinz had gone early to the U.S. His wife’s maiden name was Eisenfresser and they came from Hof. A relative named Wolf lived with old Lady Eisenfresser in Villa Wolf [#17 on map] across the street from us on Schoolstrasse. 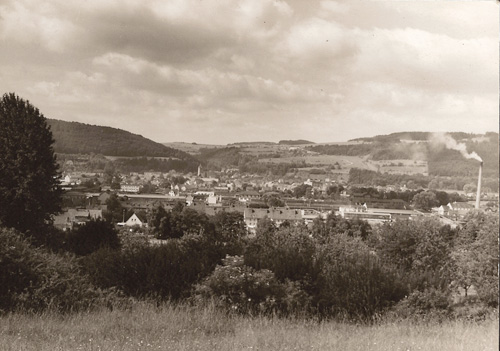 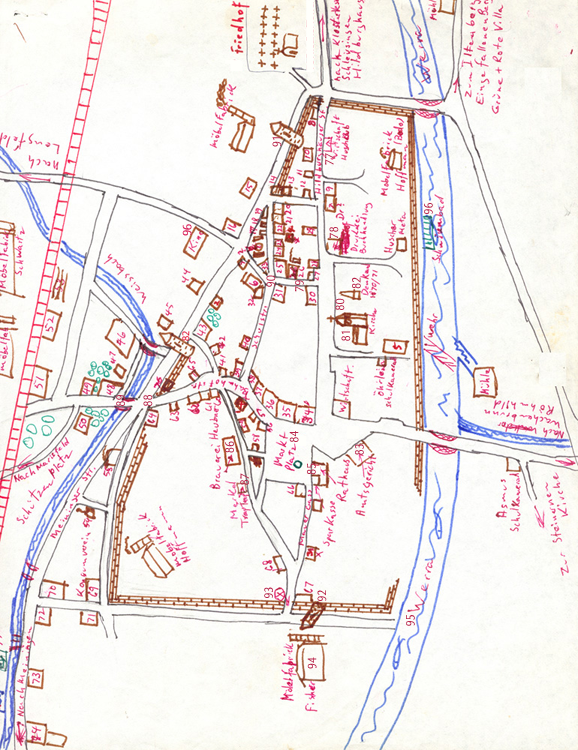 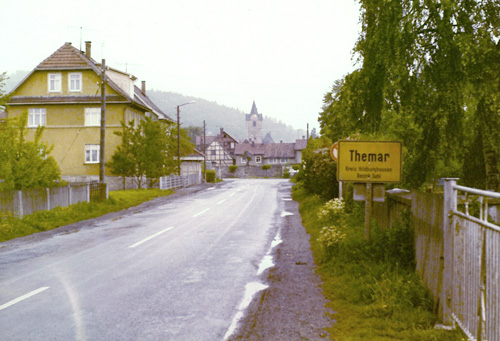 On the right is the old cemetery, seen in the next picture. Notice section of old wall. A little to the left of the end of the street is “Oberes Tor” or “Upper Gate” and the beginning of Hildburghäuser Straße. In the yellow house on the left lived the only Catholic family at my time. Their twins, a boy and a girl, went to the same school class as I, but they had to leave town before I had to. A Catholic army destroyed the town in the Thirty Years Religious War of 1618-1648. The general’s name was Tilly. It happened about 1625-1626, and all because some English soldiers had landed in Pomerania, about 5000 strong, and destroyed all the fortified towns and strong points along the Werra River and so on, in order to out flank them. Catholics were not very popular in Themar ever since.

The people in the house had an automotive shop in the back.

I attended one funeral of an old schoolteacher by the name of Jacobs, he had been a veteran, and the orchestra on the way to the cemetery played all kinds of sad songs, like “Where will you be in a 100 years from now?” and so on. But on the way back, we kids could not keep up with them, so lively was their music and their marching.