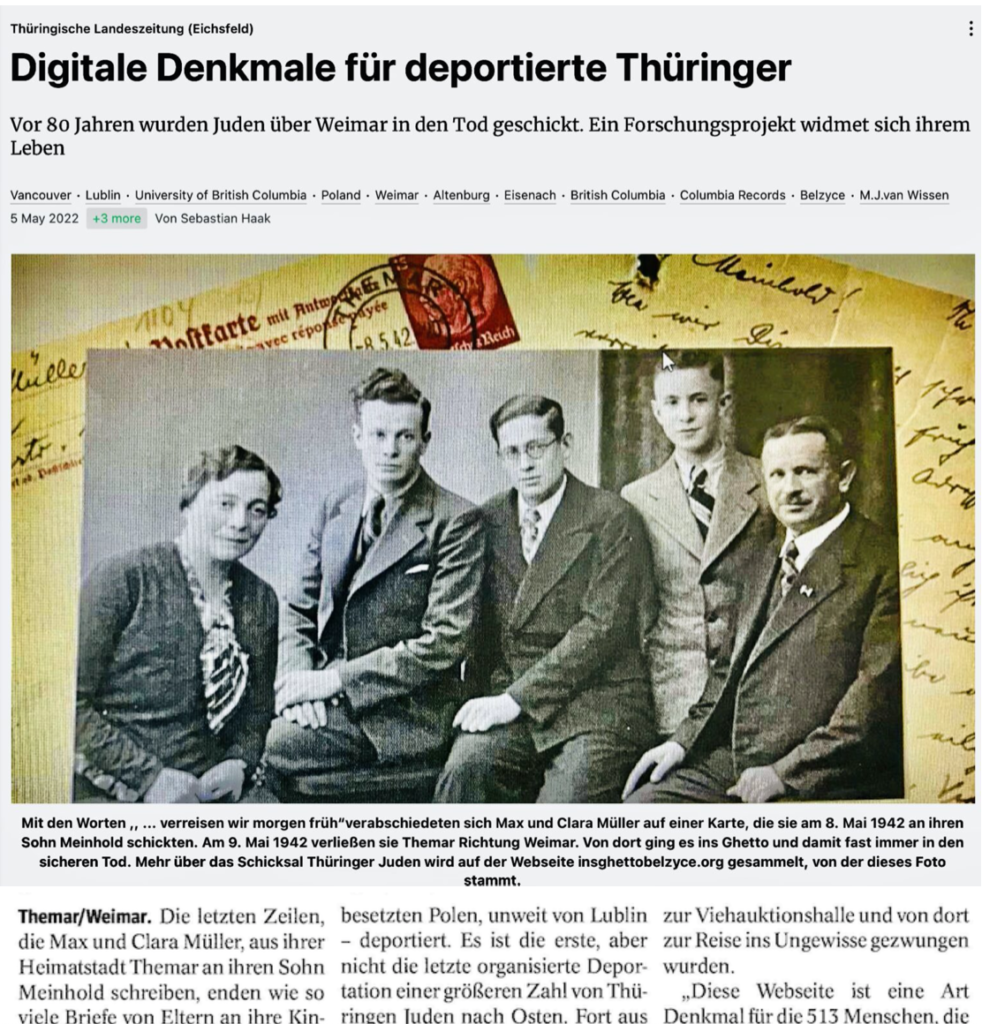 Themar/Weimar. The last lines, which Max and Clara Müller wrote from their hometown of Themar to their son Meinhold, ended as so many other letters do — “Love”. Full of yearning: “Much love, your Papa,” writes Max Müller on 8 May 1942 on a piece of paper now yellowed with age. Right under his signature, Clara Müller writes, “all my love, Mama” in a more upright and angular handwriting than her husband who uses a more fluid style that covers the page quickly. On this day, that is important: “Since it is very urgent, I am writing briefly.” It is the last sentence of their greeting to Meinhold.

One day later — on 9 May 1942, 80 years ago — the Müllers were on their way, just like hundreds of other men, women, and children, by order of the Nazi Regime and its henchmen, to the cattle auction hall in Weimar (which no longer exists, having burned in 2015).

One day later — 10 May 1942 — they were deported into the Belzyce Ghetto near Lublin in occupied Poland. It is the first, but not the last, large deportation of Thüringen Jews to the ‘east’. Away from the communities in which they lived. Away from places in which — at least until the Nazi takeover of power — they had lived for generations well integrated into the community. Sometimes ogled at by their neighbours. Always driven away by state administrators who did not protect but persecuted them.

While there are still some witnesses who can tell us of the anxiety and fear that ruled in the cattle auction hall, for many of the deported only a name remains. Who these people actually were, where they grew up, what dreams and hopes they had for their children, what their everyday lives were like, and how they looked, is unknown for most. And if more is known about some individuals, most of the information is not publicly available. Until now. That the life of the Müllers has been well researched and is available on the internet remains the exception, not the rule.

This may well change in the foreseeable future. If the current research project of Sharon Meen, the first results of which are available on the net, is successful. She is attempting to reconstruct as many lives as possible of those who were transported to Weimar and from there deported to Belzyce Ghetto.

“This website,” says Meen, “is a form of memorial to the 513 men, women, and children who were deported on the 10 May 1942 to Belzyce Ghetto.” Since the late 2000s, she has been researching the Jewish families of Thüringen, with a particular focus on the town of Themar and the surrounding villages. She emphasizes that she is not a “Holocaust historian” but is more interested in the history of German-Jewish families back in time as far as she can push, often for centuries. “To be a Jew in Germany is much more than being a victim of the Shoah.”

On the project website there is a map of all the places from which Jews had to travel by train to the cattle auction hall in Weimar. Details of how many people — and their names — are provided for each place. Extensive information has already been developed and published about many of these individuals.

An example: Ilse Rosenthal, who lived in Apolda at the time of deportation. She was born in 1913 in Uelzen, married her husband Max in 1941 in Pössneck. Her father — who fought in the German army in World War I — was hauled off to Buchenwald in 1938. In 2018, Stolpersteine were laid for the Rosenthal family so that passers-by may remember the fate of these earlier residents.

Many others do not yet have biographies; Meen is hoping that others will help. “Perhaps there are people,” she asks, “who know about these families but have never talked about this and might now contribute their knowledge? Maybe there are letters in attics that might tell us about the four people who were forced to leave Eisenberg? Or about the 58 who were transported from Eisenach? Maybe there are photos?” “Eight decades after this first major deportation of Thüringen Jews some progress has been made,” she says, “but there is still a lot to do.”

Memories of lived lives should outlast time
On a more historical-philosophical level, this project is also an attempt to thwart a Nazi plan. Where the Nazis wanted to ‘wipe out’ the “Jewish element” from German history, that is, the murder of Jews was a critical part of their plan — Meen and others ensure that at least the memory of these people endures.

In the state of Thüringen there are many initiatives and plans to preserve the memories. A memorial book of the 2500 Jews of Thüringen is being prepared by the memorial site Topf & Söhne in cooperation with the university and regional libraries. Max and Clara Müller are two of this number. When and where they died will remain unknown.