Kristallnacht 1938 — what happened in Themar?

For the third time, Themarens commemorated Kristallnacht 1938. Barbara and Arnd Morgenroth began the city’s examination of the painful chapter in its past with the 2008 exhibit, “Sie Waren Themar/They were Themarens.”  This year, they invited Julia de Boor to present her lyrical-musical conversations with three young German women, Anne Frank, Selma Meerbaum-Eisinger and Lisa de Boor, two Jewish and one-non Jewish. She spent the morning at the Anne-Frank Regelschule/public school and then presented to a large general audience in the evening at the Amsthaus. 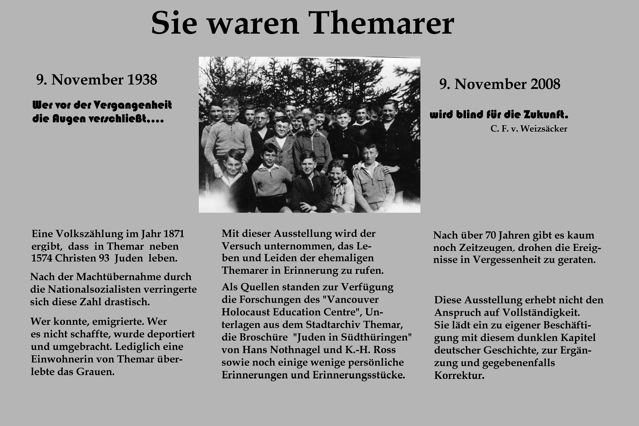 In his introduction to de Boor’s presentation, Arnd Morgenroth highlighted the need for Themarens to keep alive the memories of the Jews of Themar: “I grew up in Themar,” said Morgenroth, “but as a child and young person I never heard of what happened here on Kristallnacht.” Morgenroth had been particularly struck by the fact that, in 2008, when the 1952 time capsule stored in the church tower was opened, there was not one document that mentioned the dramatic events of 1938.

Part of what the Morgenroths have learned since then comes from an eyewitness report: on November 9th, right across from the Anne Frank School in Schulstrasse, the first Jews of Themar  were beaten in a Gaststätte/pub. When others wanted to come to their aid, the SA-men, who included non-Jewish citizens of Themar, yelled: “This is a Jewish operation — if you interfere, we’ll deal with you later.” The arrested men — although some women were arrested in the pogrom, men were the primary target — were imprisoned overnight in the jail in the Amsthaus; the following morning, they were assembled on the Market Square, attacked with planks and then hauled off to Buchenwald.”

There were 21 Jewish men in Themar in November 1938; eighteen (18) were rounded up in the Kristallnacht pogrom. Ernst Gassenheimer (b. 1870) was in hospital recovering from surgery and he was allowed to remain there; Adalbert Stern (b. 1917) was hiding out, as it were, by riding the bus, not the train, and hiding with the parents of friends in the region; we do not know where Arthur Neuhaus (b. 1879) was.

Among those arrested were Max Müller II (b. 1884) and his oldest son, Herbert, 24 years old, who lived on the northern part of the city on Meininger Strasse 17. Fifty years later, in 1988, Herbert Müller recalled his experience in a speech to his synagogue in Jamaica, New York:

“On or about Nov. 7th 1938,  a member of the German Foreign service, Ernst von Rath, was shot by a young Jewish man. We knew instantly that there would be major repercussions and we were warned to act quickly. So on November 7th we removed the Sifre Torahs and books from the Synagogue and buried them in the backyard of the Synagogue. 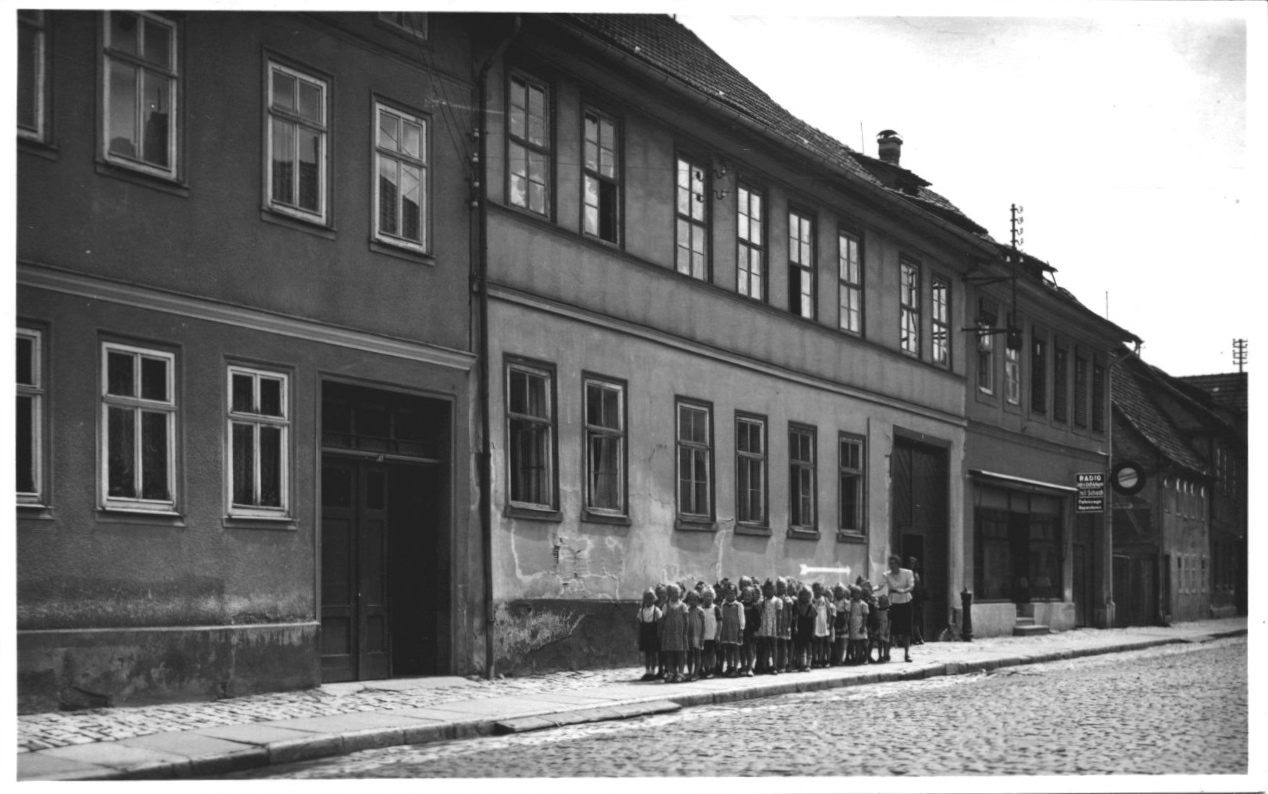 The Themar Synagogue, c. 1945. The Synagogue was not set afire as the adjoining buildings would have been burned. Everything inside the Synagogue was destroyed. Credit: Themar City Archives.

During the night of Nov. 9-10 at about 2.30 a.m., we awoke from the noise of broken doors and windows. Half a dozen Stormtroopers entered and told me: ‘You are arrested, get dressed and come along.’ On Nov. 10 1938, trucks carried us to Buchenwald with no food or water. There was no communication to our families. Flora [Herbert’s wife] did not know till the following day [November 11, 1938] if only I was arrested or all males in the community. I was Schutzhaeftling #20974/Block 50.”

Both Max Müller II and Herbert Müller returned from Buchenwald, as did 15 others — Moritz Levinstein, however, the beloved Lehrer of Themar, did not return alive from the brutal ordeal.

Much clearer now about Nazi intentions, many of these men made plans to leave Germany. Herbert, his wife, Flora Wolf Müller, and his mother-in-law, Frieda Mayer Wolf, escaped, travelling from Berlin in May 1941 in a sealed train to Lisbon and then on to the United States. They were the last of the Müller family to leave; Herbert’s  younger brothers had left for Sweden and Palestine earlier. Their mother and father, Klara Nussbaum Müller and Max Müller II, were deported to Belzyce Ghetto in May 1942. 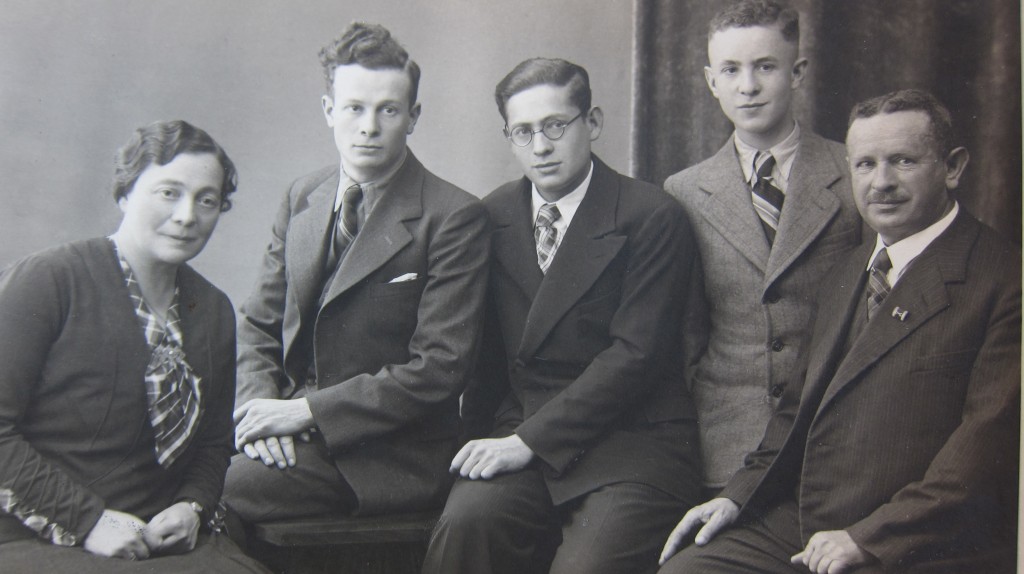 Of the 21 Jewish men in November 1938, eight emigrated, one was rearrested and sent to Buchenwald where he died soon thereafter. Twelve were deported and murdered.