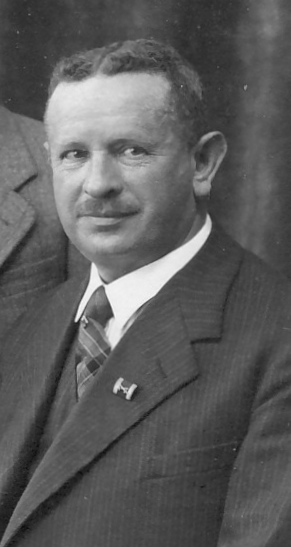 Max Müller was the third child of Nathan and Berta Müller (née Schwed). He was born in in 1884, in Marisfeld, Sachsen-Meiningen, a small village of fewer than 500 people. The Jewish community of Marisfeld, which had numbered about 200 twenty years earlier, had shrunk to around 50 by the 1880s, a result of a disastrous fire that had burned many of the town’s buildings — Christian and Jewish — in 1866. Max’s parents, however, had chosen to stay in Marisfeld after the fire and continued to run their Manufacturwaren/textile business.

In 1912, Max married Clara Nussbaum of Bad Hersfeld, a town of over 11,000 citizens and a Jewish community of 325, some 90 km northwest of Marisfeld. Apparently, Max promised Clara that they would move from Marisfeld to a much larger centre but, with the outbreak of war and other circumstances, the move did not happen until 1929. In 1913, the first of their three sons, Herbert, was born. In 1914, Max went to war and came back, earning an Iron Cross for his bravery. Meinhold was born in 1919 and Willi in 1922. 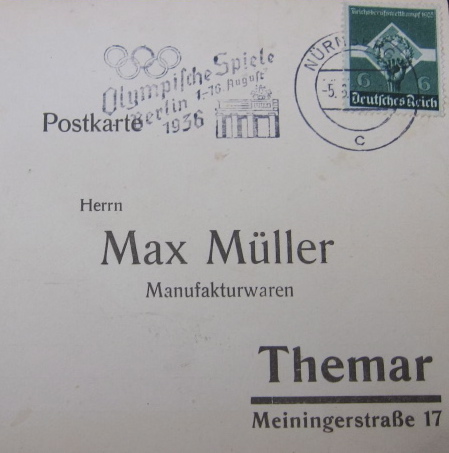 This card was used by Max Müller to correspond with his clients and suppliers. The Müller Collection includes a collection of Korrespondenzkarten/correspondence postcards.

Max Müller was 49 years old when Hitler came to power. Like many other Germans, both Christians and Jews, he may have initially expected the Nazi regime to be a temporary aberration. Like many other German Jews, Max probably found it difficult to imagine the extreme outcome of Nazi persecution of Jews. Through the first half of the 1930s, he hoped that his status as a WWI veteran would protect him. Yet growing anxiety about the future prompted the family to find emigration routes for the younger sons: both Meinhold and Willi were able to leave Germany before Kristallnacht, Meinhold in 1936, first for Italy and subsequently for Sweden, and Willi in 1938, just before Kristallnacht, for Palestine. Still in Germany at Kristallnacht, Herbert, who had married in August 1938, and his parents faced the rapidly increasing difficulties of finding refuge in another country.

Relatives did their utmost to get the Müllers out of Germany. Letters from Clara and Max to their sons Meinhold and Willi between December 1938 and 1942 detail the efforts of Max’s cousin, Herbert Sweed in California, and Albert Wolf in New York, to sponsor their immigration into the United States. The letters have been transcribed and are available in German: ,,Innige Küsse: die Briefe und Postkarten von Clara und Max Müller 1938-1942.” The translation into English has begun and the first letter is available here: 1938: Letter #1

But their numbers were too high — Clara wrote to Willi in 1939, before the outbreak of war, that they would probably have to wait two years before they could hope to be within the American quota allowance. But time ran out: in October 1941, all emigration from Germany was forbidden, and Clara and Max had still not reached the top of the list. The forced emigration, aka deportation, of the German Jews began and, on May 8, 1942, Max and Clara were taken by train from Themar to Weimar where they were deported further to Belzyce Ghetto in Occupied Poland.

Research in the archives now available in the Lublin District has revealed that Max Müller was taken from the Belzyce Ghetto to the nearby concentration camp of Majdanek, where he was murdered on 20 October 1942.

A Stolperstein has been laid for Max Müller in front of the house in Meiningerstraße 17 in Themar.