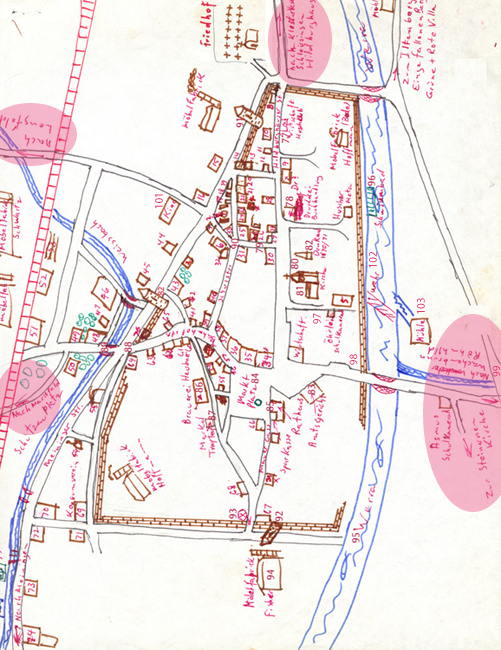 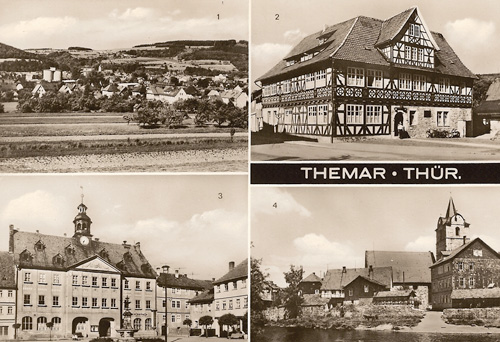 Right before the church tower is an old schoolhouse [site #5], my mother went there. Fritz Öhrlein lived
in the house on the left [site #97], the break in the wall was only a small path. 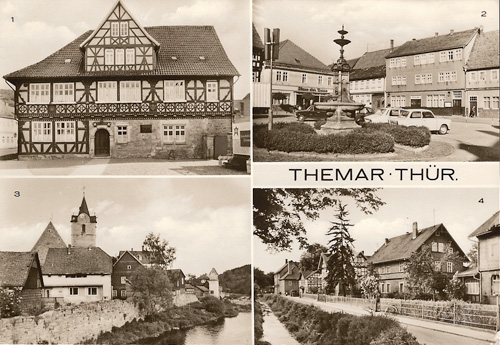 The picture of the wall along the Werra must be taken from the bridge across the river, in the background.
On the right is a weir to dam water [#105] and channel it to a mill [#106]. There is more siding and growth along the river since my time. 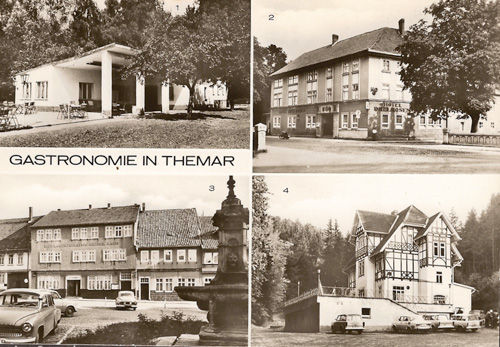 73. Gastronomie/Fine Dining in Themar. Credit: Bild und Heimat Verlag. 1. Café at the swimming pool, not there in my time. Must be new. 2. “Hotel Drei Rosen” 3. Grüner Baum or Green tree, former Nazi headquarters 4. Waldhof or Forest Inn. I think it was near Dicke Eiche, it was too rich for our blood. 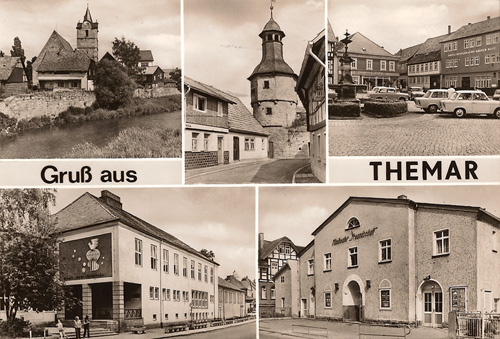 When it [the cinema, #101] was being built in 1924, I climbed out on the scaffold and fell off and hit my head and busted it wide open.
Dr. Schmitz put sulfur powder and a bandage on it, and I passed out. I was 3 years old and ran around with a bandaged head for about 3 months. 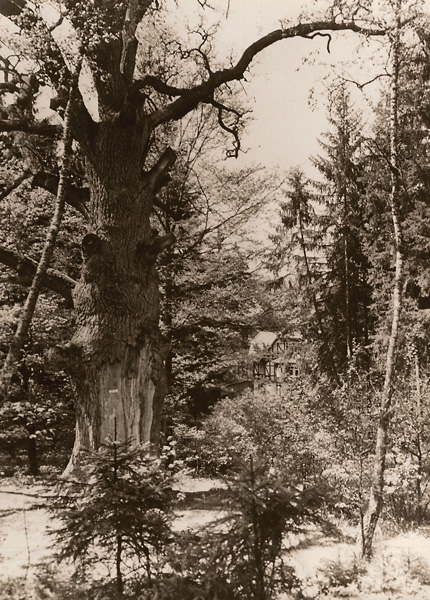 It took six men linking hands to circle it. It was a nice hike along a little creek to go there. From there a lot of little paths and trails crisscrossed the mountains, one along the road to Wachenbrunn went to the old forester’s tree-farm. My father worked there for a while. I used to talk to the forester and he told me and showed me many things in the forest. Along the road to Wachenbrunn grew a patch of wild cranberries (Hölberle). My father worked on that road and also cut timber there, which was sold by the city for firewood. The people in the village had goiters, at least a lot of them did, mostly women. They said they were caused by the water. Who knows? 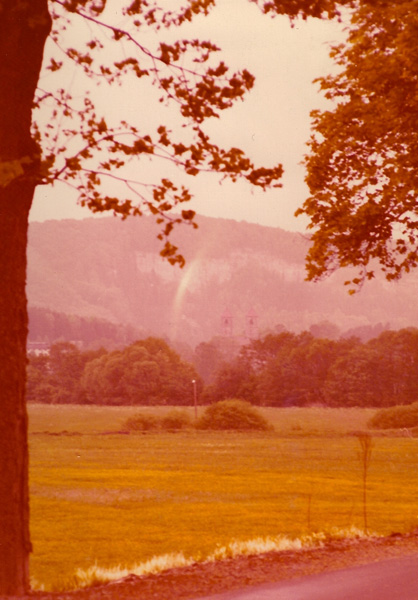 Kloster Vessra has not been in use as a Monastery, I think, since the Peasant War or the 30 Years War, partially in ruin. The mountain in the back is the ‘Eingefallener Berg’ or ‘collapsed mountain.’ A huge landslide took place in 1595 and buried a village named Dörfles, of course because of their evil ways. There is a cave in that slide, very deep and cold, it is called the “Eisloch” or “Ice Hole”. If you go to the end of it — and of course I did — you can still hear the crying of the buried people. I didn’t hear a thing. The road in the foreground comes from Schleusingen and the river Schleuse runs here into the Werra. A former neighbor on Schulstrasse had a porcelain factory here. It went under during the Great Depression. We always played with their children. Some of our china was made here. 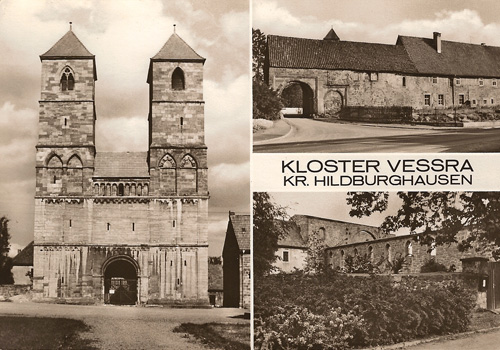 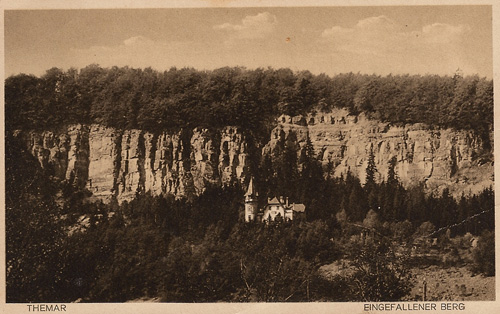 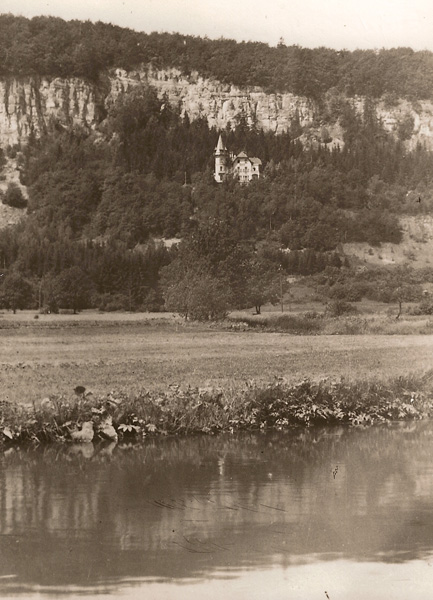 This is the ‘Red Villa’ because here the roof was red tile. In the foreground is the Werra River. Once Horst Plaff and I roped ourselves together one time and climbed up about the extreme right of the picture, where also the entrance of the Eisloch was. We could have broken our necks. Someone recognized us and told our parents. Boy did we catch hell. 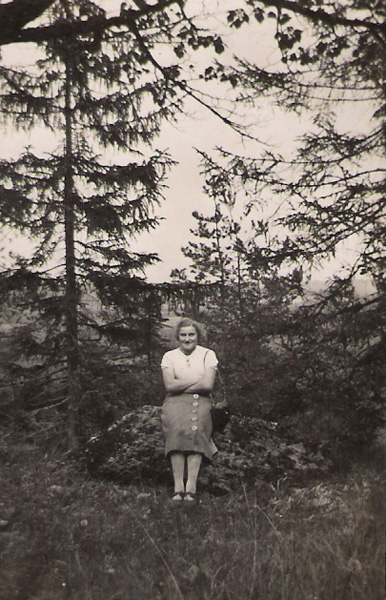 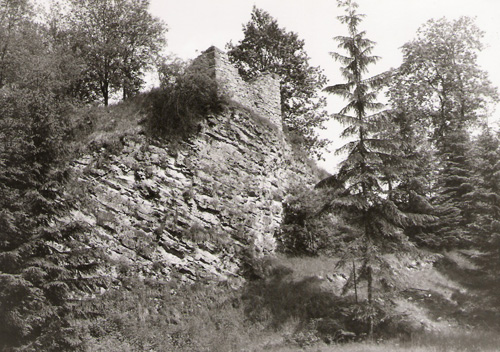 This church ruin was supposedly built by St. Boniface in the 8th century, after he had established a mission to the Germans in a town named Fulda, on the River Fulda.
Not too great a distance away. The Werra River and the Fulda River merge near Wesermunde and form the River Wesser, which ends in the North Sea. 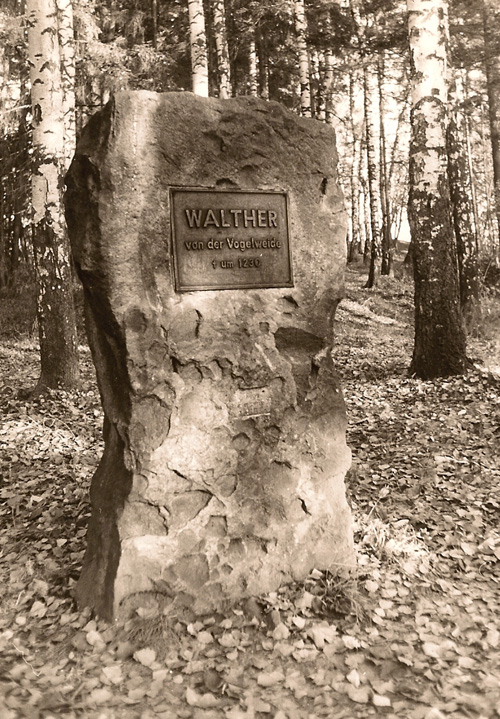 87. Monument to Walter von der Vogelweide ,a 13th century minnesinger or minstrel, he was one of the Singers in the Singer War on Wartburg – see “Tannhauser.” Photo: Foto-Mittag, Themar/Thür. 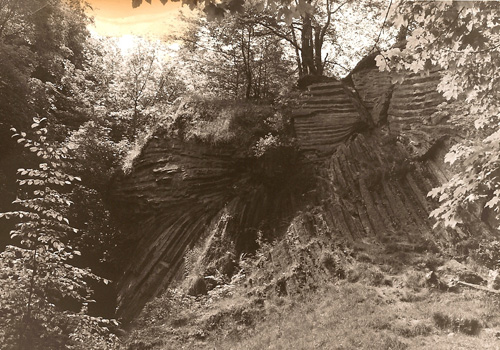 Feldstein was also called Devil’s Rock, of course, always the old Devil. This formation of a cluster of hexagonal basalt columns was surrounded by a half circle of other upright basalt columns. It was quite dramatic, also fun to climb. A beautiful hike. Every year at Pfingsten or Pentecost, a songfest was held here. All the singing societies and quartets came here for competition from far and wide. There were bratwurst stands and a beer tent and sundry other goodies. People by the hundreds came to listen and have a picnic. It was a great time. My father had a pretty good tenor and sometimes took part. I remember these outings very fondly. We used to collect “Waldmeister” or “woodruff” and make a kind of summer drink out of it. There were also many spots with wild strawberries. 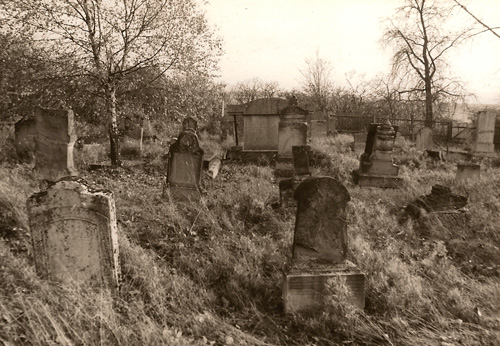 Marisfeld had at one time a large Jewish population, maybe 50%. I remember a barn with a Mogen David that had been the Synagogue. The cemetery was used by Jews in the area. It is now under the care of an office in Erfurt, and an old couple in the village try to take care of the immediate needs. The damage was caused in WW II by shellfire.

[Editor’s note: In 1865, the village of Marisfeld had 200 Jewish residents, about one-third the total population. A massive fire in 1866 prompted most (150) of the Jews to leave. They either went to Meiningen or Themar and the inflow into Themar prompted the growth of a Jewish community. The Themar community continued to use the Marisfeld cemetery until the last burial in 1941.] 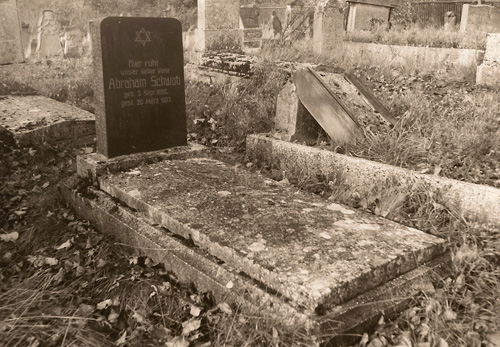 My Grandmother [Regina Schwab] and my Great-grandparents are also buried here. 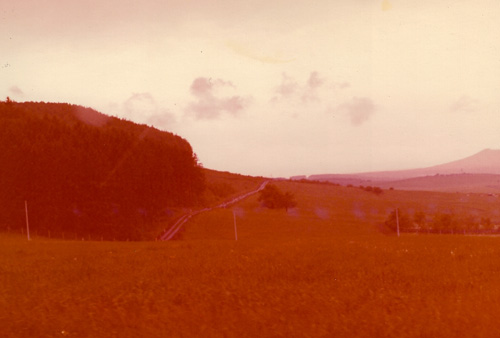 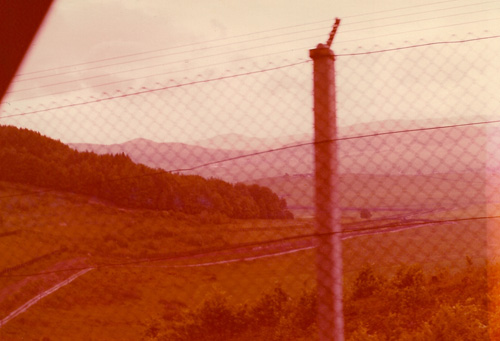 [Editor’s Note: the East/West division was about 30 km. west of Themar and past Meiningen.]