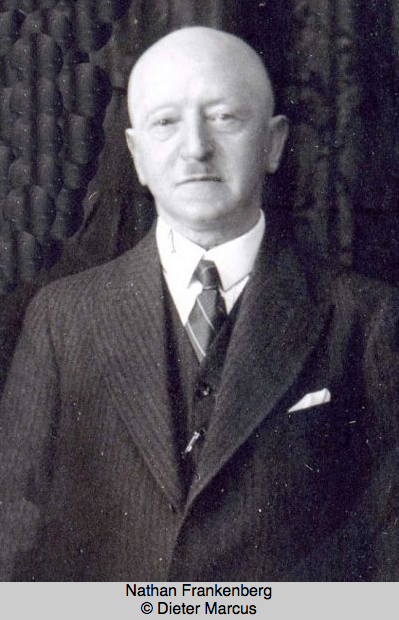 Nathan Frankenberg, b. 1863, was the youngest child and second son of Jacob Moses and Louis (née Mai) Frankenberg. Jacob and Louise moved to Coburg in 1890. Nathan was 37 years then and it is not yet known where he spent the years between 1876-early 1890.

in November 1894 Nathan married Minna Gassenheimer of Themar, the daughter of Samuel & Charlotte (née Stein) Gassenheimer. Minna and Nathan first lived in Coburg, where their first son, Siegfried, was born in 1895; they then moved to Halle an der Salle, where their second son, Walter, was born. Other Gassenheimers lived in Halle: Minna’s sisters, Emma Marcus and her family, and Elise Ney, and brother Georg and his wife Selma (née Schwab). Nathan joined the Halle branch of Gassenheimer agricultural machinery business which was managed by Georg Gassenheimer.

Walter Gassenheimer died as a young boy of eleven years. Siegfried continued to live in Halle/Saale, marrying Hertha Meyer. They lived with Nathan and Minna in an apartment in Prinzenstraße 12.

In 1936, Siegfried left Halle/Saale and moved to Czechoslovakia  where he lived in several cities including Podebrady and Dlazdena. In 1938, Hertha Frankenberg also went to Czechoslovakia, but she stayed in Prague.

Nathan and Minna remained in Halle/Salle. They moved into an apartment in Kurfürstenstraße 74 (now Feuerbachstraße). On 30 June 1942 they were forced to move in to themussten sie in das „Altersheim“ auf der Boelckestraße 24 (heute Dessauer Straße) umziehen. 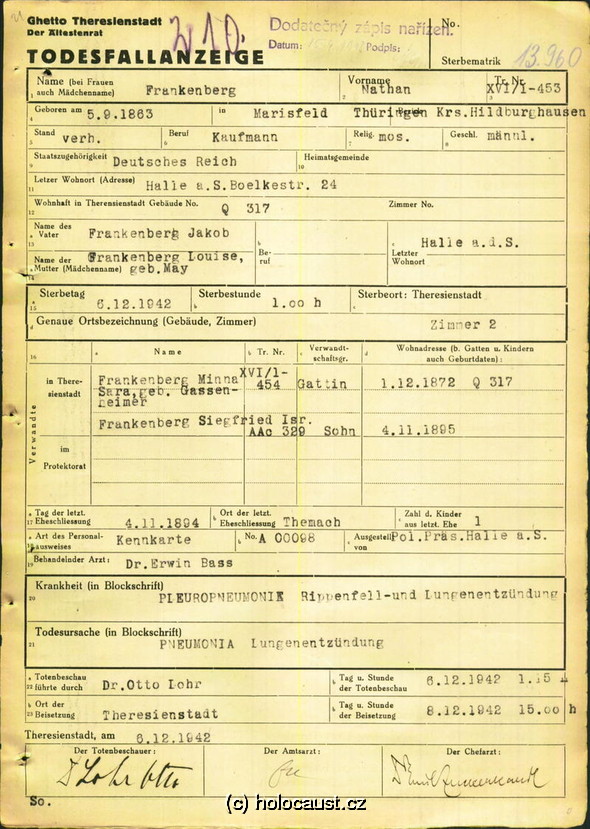 All four Frankenbergs were trapped in the Reich when the deportations began. Siegfried and Hertha were taken from Prague to Theresienstadt Ghetto on 09 June 1942; three and a half months later, on 20 September 1942, Nathan and Minna were deported from Halle/Saale to Theresienstadt. Nathan ‘died’ in the Ghetto on 06 December 1942