There were many branches of the Bär/Baer family of Marisfeld. As yet we have been unable to identify the patriarch and matriarch who bring all the threads together and perhaps we will not find them in Marisfeld but elsewhere. On Saturday 27 January 1945, Soviet forces liberated Auschwitz. Of the 7,000 remaining prisoners, one man had a direct connection to Themar. His story — although we know little of it — gives us a glimpse into the life of one of those who survived Auschwitz.

Otto Baer was born in Themar on 12 July 1895. His father was Samuel Baer, b. 28 January 1865 in Marisfeld; his grandfather was Aron Bär, and his great-grand-father Samuel Bär, b. 1793 in Marisfeld. His roots were thus deep in Thüringen back into the 1700s. Aron Bär, his wife, Sara, and their family had moved to Themar sometime in the late 1860s or early 1870s — we find them on the 1875 Themar Einwohner/Residents List. In the transition from village to small city, the spelling of the surname changed from Bär to Baer. Samuel would have been ten years of age and have continued his schooling in Themar. See Descendants List of Samuel Bär (1793-1854).

Otto’s mother, Lina, née Müller, was born 28 January 1867 in Würzburg, Bavaria and at the moment, this is all we know of her background. She moved to Themar upon marriage to Samuel.

Otto Baer was born in 1895 in Themar; his sister, Klara, was born 11 years later in 1906. Both children would have been part of a lively group of young people in Themar, attending the elementary school and receiving Jewish religious education from the Lehrers, and Hugo Friedmann.

The Themar Familienregister tells us that Samuel and Lina moved from Themar to Berlin and we can find them in the Berlin Address Books from 1915 on, living at Jablonskistr. 26 (image left) in the Prenzlauer Berg area. Samuel and Lina would have been in their late forties, Otto just shy of 20, and Klara 9 years.

Samuel Baer died on 25 December 1916; Lina decided to remain in Berlin and she and Klara, and presumably Otto, continued to live in the same apartment at Jablonskistr. 26.

The 1931 Address Book for the Jewish Community of Great-Berlin,  includes a listing for both Lina and Otto Baer at Jablonskistr. 26.

From then through to the end of 1935, there was an entry for Frau L. Baer at this address; from 1936 until 1939, the entry was for O. Baer, suggesting that his mother had either died or moved into a home for the elderly

The 1925 Berlin Address Book identified O. Baer as a Kfm/Kaufmann/businessman, the 1928 book listed him as a Vertreter or sales representative or agent. In 1936, under the Nazi regime, he is listed as a Handlungsgefhilfe or clerk.

In the Reichspogromnacht, known as Kristallnacht, Otto Baer was rounded up and hauled off to the concentration camp at Sachsenhausen. The date of his release is unknown as is 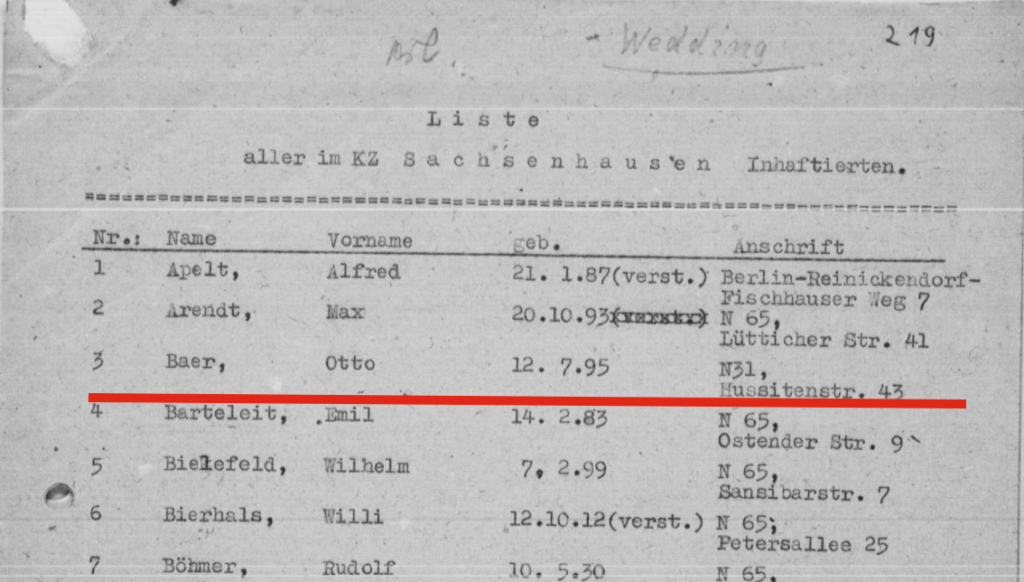 In the Reichspograom/Kristallnacht of 9/10 November 1938, Otto Baer was rounded up with other men of Berlin and taken to Sachsenhausen Concentration Camp.

We do not know if Otto Baer retained any connections to Themar during the years, or whether he had any contact with Selma Stern, related to him through marriage, when Selma moved to Berlin in 1940. They lived in different parts of Berlin. The only trace of Otto in the official records is his letter of 27 January 1939 to the Themar Registrar,  (image at left) confirming that he was adding “Israel’ to his given names as required by the law of August 1938.

Otto was 46 years of age when the deportations from Berlin began on 18 October 1941, and his age and ability to work may have spared him from these first deportations. But a year later, when the Nazi Regime accelerated the deportation of Jews from Berlin, he was among those targetted. In early December 1942, he was rounded up from Jablonskistr. 26. On 9 December 1942, he and 993 other Jews were loaded into cattle cars and transported east to Auschwitz. The entry for Otto Baer in the Transportliste for Osttransporte 24 below stated that he was ledig/single and arbeitsfähig/able to work.

Source: Statistik u. Deportation.(click to enlarge)

Upon arrival in Auschwitz on 10 December 1942, the SS carried out a selection process. One hundred and thirty-seven (137) men and women — including Otto Baer — were selected for labour and given numbers 26621-26645. For just over two years, Otto Baer managed to stay alive in the brutal conditions of the camp. According to historian Rita Meyhöfer, Only he and one other person on the transport of 9 December 1942 were alive on 27 January 1945. Otto Baer was just short of his 50th birthday.

Sometime after the liberation, the American army found Otto Baer in Zeitz, south of Leipzig. He returned to Berlin and to the area in East Berlin where he had lived earlier. Aufbau, the New York newspaper that provided the Jewish community with names of victims and survivors, included Otto’s name and address in its issue of 9 November 1945  — Otto was living at Hussitenstrasse 43, a 40-minute walk from his former address. Two years later, the listing in the Mitgleidverzeichnis der Judischen Gemeinde zu Berlin/Members of the Jewish Community of Berlin, was the same. After that all trace of him in formal records is lost, possibly because the area he lived in fell under Soviet rule and access to records is challenging. 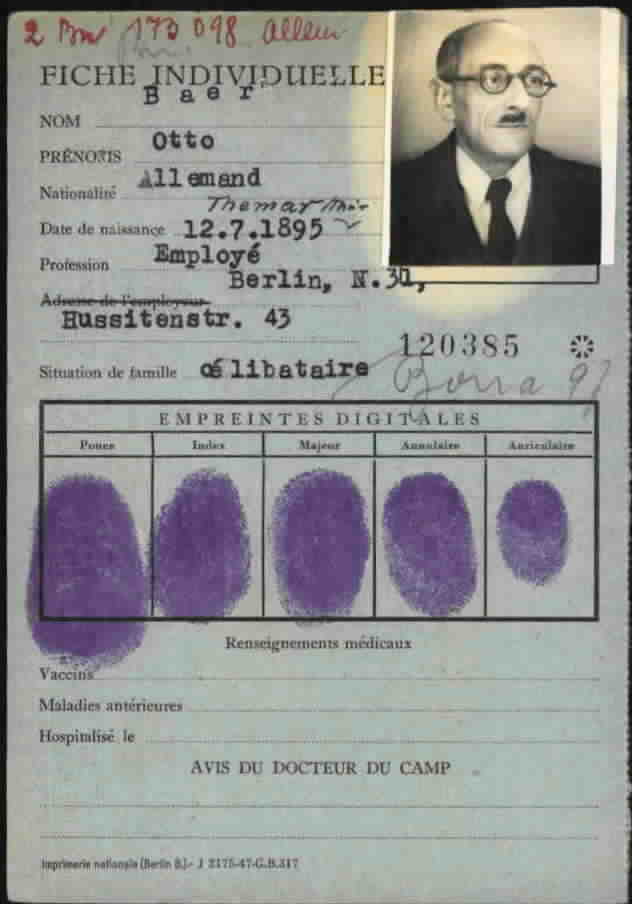 In December 2017, we learned from family members — descendants of Klara Baer, Otto’s sister — that Otto continued to live in East Berlin until his death in 1972. We also learned that Klara survived the war and Holocaust. Her husband, Mordka “Moritz” Mendelwicz did not; he was murdered shortly before the end of the war, March 1945 in Mathausen KZ. Klara’s and Mordka’s son, Siegbert, also survived and he and his mother travelled to New York City from Antwerp in August 1948. Klara and Siegbert Mendelwicz changed their names to Claire and Barry S. Mendell. Claire Mendell died in 1977 and Barry Mendell died in 1991.

Between August 1942 and October 1944, forty-eight (48) members of Themar’s Jewish families were deported to Auschwitz. Otto Baer, b. 1895 in Themar, was the only one of them to survive. How he survived close to 2 ½ years we may never know. Perhaps someone reading this page can tell us more. If you do, please contact Sharon Meen at  s.meen79@gmail.com