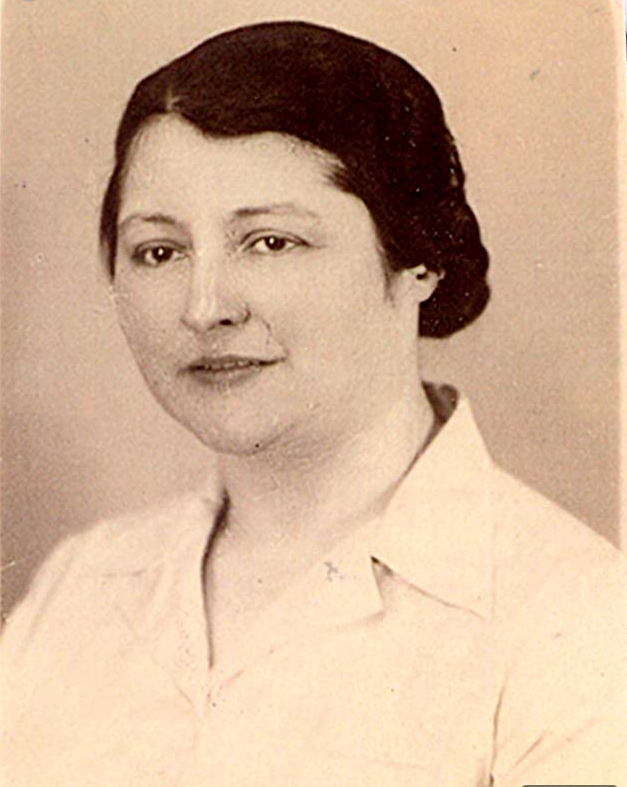 Klara Seckel was the eldest daughter of Jacoby & Bertha (née Grünbaum) Seckel. She was born in Themar in 1893. The little we know about her life is as follows: She would have attended public school in Themar and have been in the same class as Berta Schwab, also born in 1893 in Themar. Her friends may have included other Jewish children, such as Berta Schwab; Bettina Katz and Paula Kahn, both a year older; and possibly Lucie and Paula Frankenberg, both two years older. And of course her two sisters, Hilda, b. 1895, and Sophie, b. 1897. She would have received instruction in the Jewish religion from Hugo Friedmann, the Lehrer/Teacher during those years.

Klara and Hilda were probably the two Seckel children who carried memories of Themar forward with them through life; Klara was 12, Hilda 10 years old when the family left Themar for Zeitz and later Altenburg. Klara was 18 years old when her father, Jacoby, died in 1911 and at the moment we do not know whether she worked in the Kolonialgewarengeschäft/dry goods store with her mother. [At some point she acquired the skills of a seamstress, and an ability to work with furs, as this skill enabled her to live a short while longer in the Holocaust.] 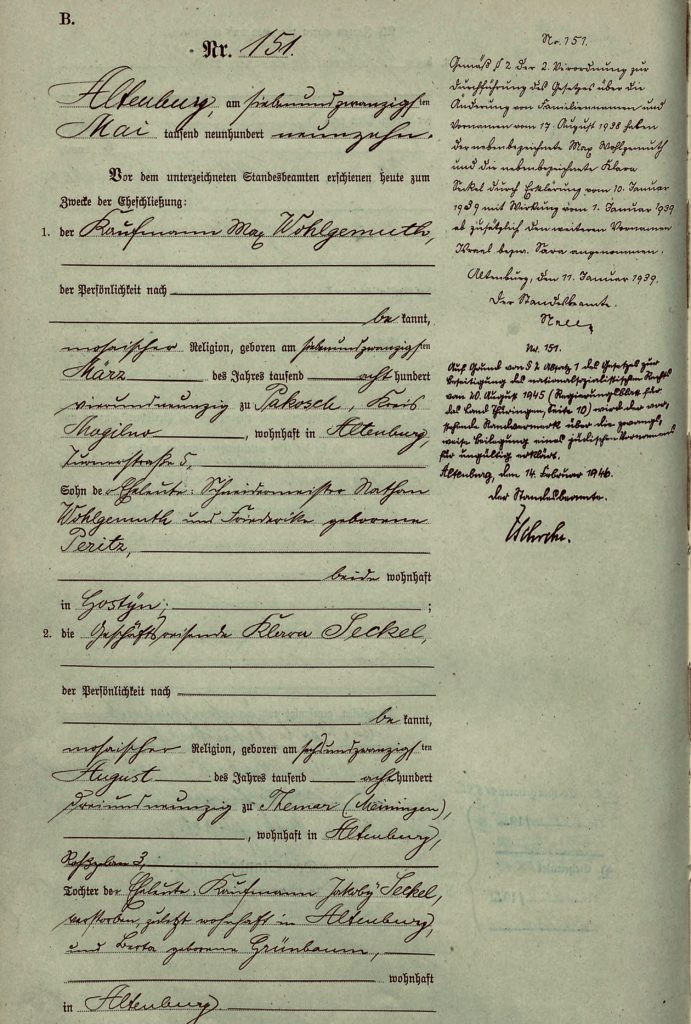 On 27 May 1919, Klara married Max Wohlgemuth. Max, b. 27 March 1894 in Pakośćh(then in the German province of Pomerania), had come to Altenburg earlier in 1919 and registered as a trader of wool products and haberdashery. Soon after their marriage, Klara and Max moved to Leipzig. Initially, they lived at Richard-Wagner-Strasse 8 but later moved to Leplaystrasse 10. Later they moved to Kohlengartenstr. 38, the home of Klara’s mother Bertha Seckel. They owned and operated a clothing store.

The specific details of Klara’s story in the 1930s are not known. Like her mother and her siblings, Klara was probably hoping to emigrate. We know that her husband, Max, survived the war, but whether inside occupied Europe or as a refugee elsewhere is not quite clear. If Max did manage to leave occupied Europe, he was probably hoping to make arrangements for Klara to follow him. This had been the strategy followed by his brother-in-law, Heinrich Seckel, with whom Max was in business. Heinrich escaped to England in 1939, left for the United States in 1940, and his wife and children joined him there in 1941.

If this was the Wohlgemuths‘ strategy as well, then it failed. Klara was trapped in Germany when the Nazi jaws snapped shut on emigration in October 1941. Both she and her mother were forced to move into Judenhäuser and it is not clear whether they were able to live together at least until Bertha was deported to Theresienstadt in 1942, or whether they lived separately. According to Ellen Bertram, Menschen ohne Grabstein, Bertha lived at Keilstr. 5 and Klara and Gustav-Adolf Str. 7.

Klara was not deported in the early transports from Leipzig, probably because her forced labour as a furrier seamstress was deemed essential for the war effort. She was in Leipzig when her mother, Bertha Seckel, née Grünbaum, was deported to Theresienstadt Ghetto on 20 September 1942. Bertha was dead within two months of her arrival in Theresienstadt. Whether Klara learned of this, we do not know. We do know of other instances where family members received news of death very promptly from Nazi authorities.

On 17 February 1943, Klara was rounded up with at least 116 other Leipziger Jews and taken to Berlin; on 26 February 1943, she was deported with this group to Auschwitz. The German National Archives Memorial Book does not give a date of death and so the date of 8 May 1945 was assigned as her death date.

Max Wohlgemuth came to the United States and changed his name to Wolton. Where he had been between the mid-1930s and the mid-1950s is unknown at this time. Max lost his wife, his brother, Emil, and his parents, Nathan and Fredericka (née Peritz) Wohlgemuth to the Nazi genocide. Parents Nathan and Friederike (née Peritz) had been living in Berlin since the mid-1920s; they were deported from Berlin to Theresienstadt Ghetto on 31 July 1942. On the 26 September 1942, they were deported to the killing centre of Treblinka. On 29 January 1943, Emil, who had been married to Klara’s sister Hilda from 1919 until their divorce in 1932, was deported to Auschwitz. 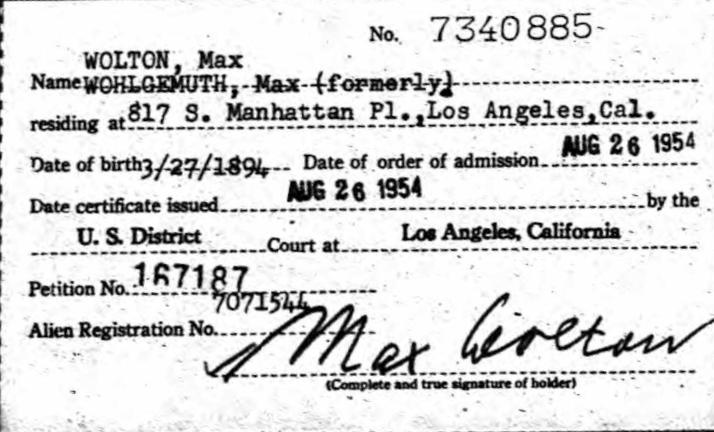 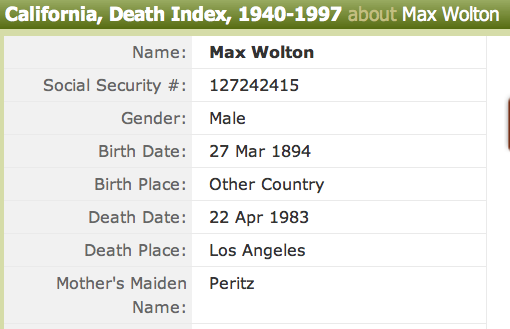