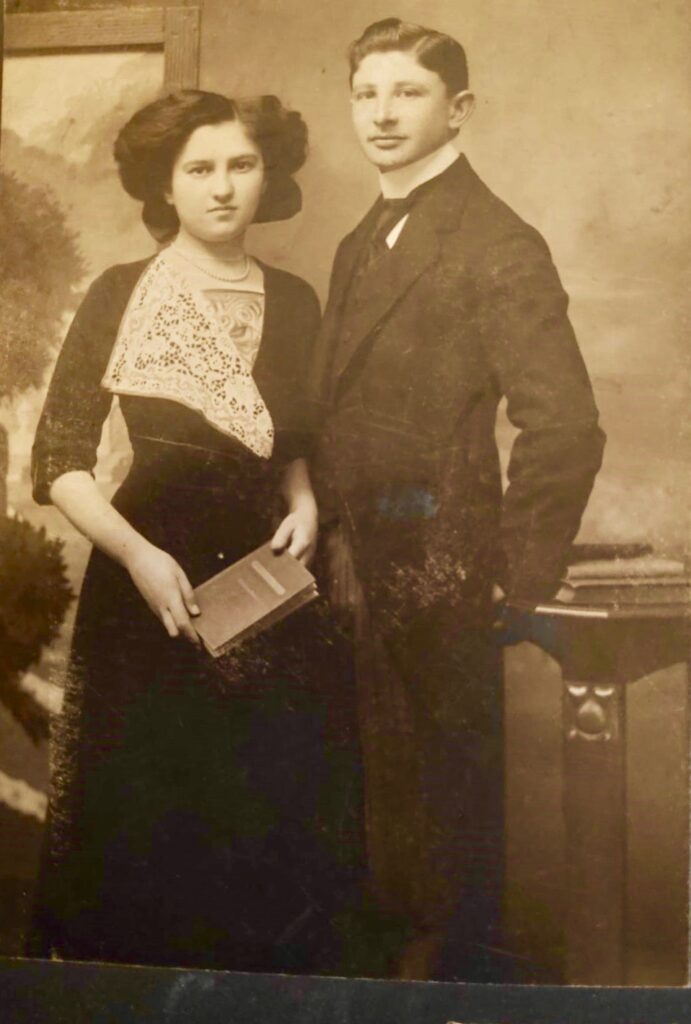 Milton Wertheimer and Bella Wertheimer were both born in Themar, of different branches of the Wertheimer family. Bella, b. 1890, was the youngest of three children of Malwine (née Frankenberg) and Nathan Wertheimer; she moved to Coburg with her family sometime in the early 1900s when she was in her early teens. Milton, b. 1886, was the second of three children of Louis and Emma (née Frankenberg) Wertheimer. Milton was in Coburg at the outbreak of World War I; his addresses were Oberer Bürglass 16 and Spitalgasse 20. He served in the military from 7 August 1914 until at least 1915. 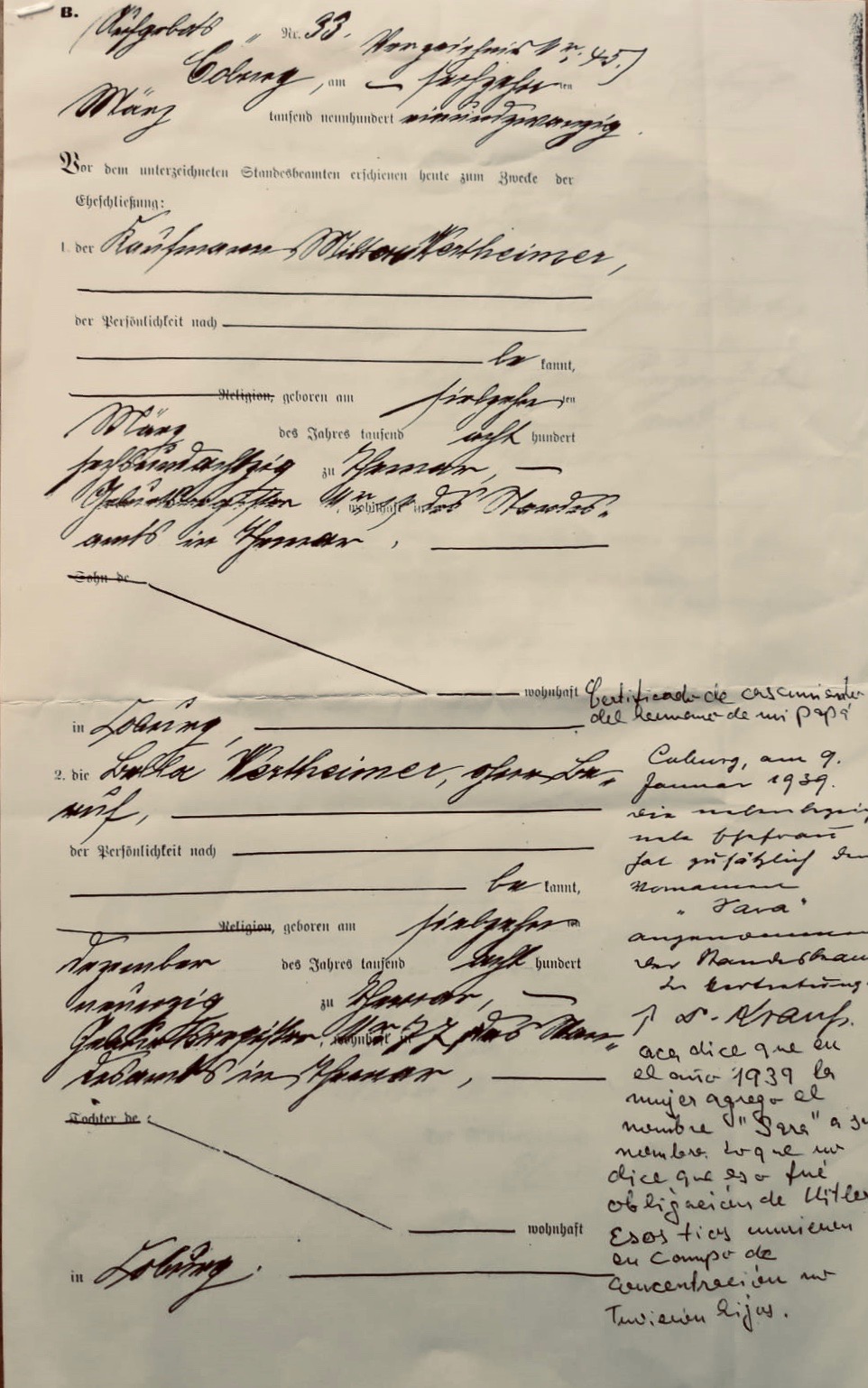 On 16 March 1921, Bella and Milton married in Coburg. The certificate (at left) identifies the couple and the witnesses. In addition, there are two handwritten notations: the first is the official record of Bella’s addition of “Sara” to her given names in compliance with the law of August 1938. The second handwriting is in Spanish, an explanation of “the marriage certificate of the brother of my husband.” Her final sentence says “These relatives died in concentration camps.” 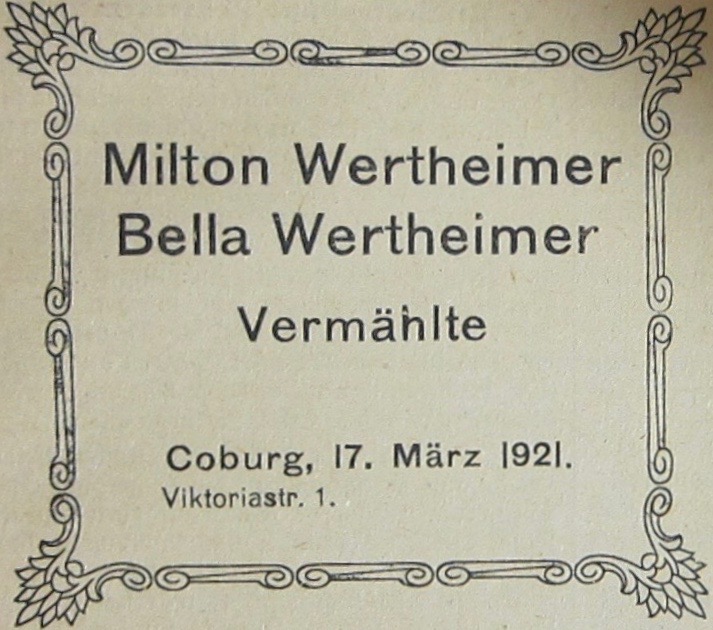 The couple let everyone in Themar know with an announcement in the Themar newspaper, Zeitung für Themar. Marriages between cousins were not unusual in Germany at that time, in either the Jewish or non-Jewish worlds.

The dress which Bella is wearing in the undated photo above is, according to Gaby Schuller in Coburg, “amazing, unbelievable! The white part is a very special kind of lace, not from Brussels (which was and is extremely well known), but from this area here. We would call it “klöppeln,” which means “bobbin lace” and it is really difficult to do. I am able to knit in lace style with very thin needles and yarn, but never ever in this way.”

For the first years of their marriage, the Wertheimers lived at Viktoriastraße 9. In 1925, the couple moved into an apartment at Mohrenstraße 28/II. Milton Wertheimer identified himself as a Kaufmann/business man in the 1928 Coburg Address Book. During the 1920s and early 1930s, he travelled frequently and widely — as far afield as Bremen. 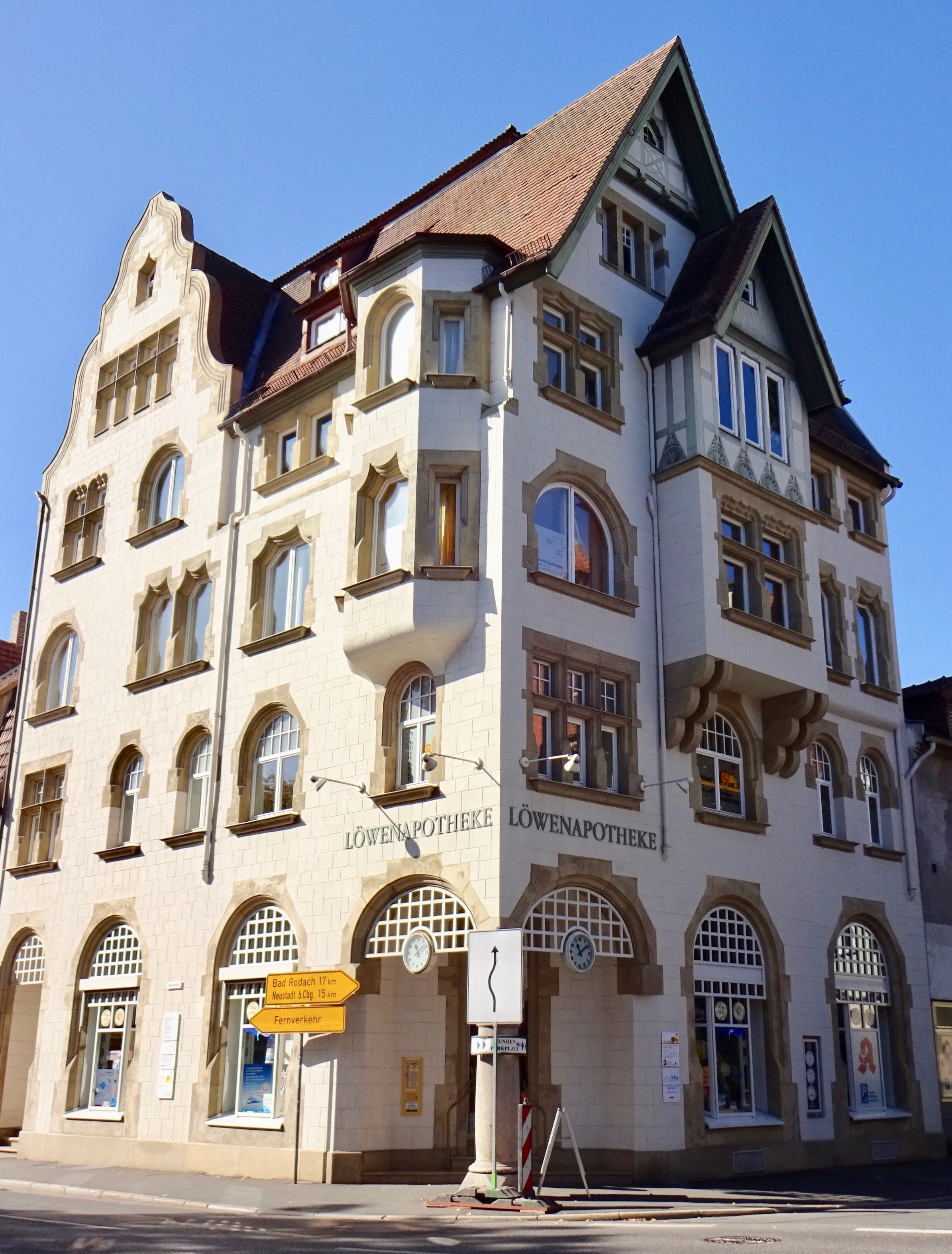 The pattern of the Bella/Milton relationship — she in Coburg, he away on sales trips — continued through the early days of the Nazi Regime. On 11 November 1932, Bella had moved into Viktoriastraße 1, where her father Nathan, now a widower, and sister Rosa Edelmuth (née Wertheimer) were living. Milton also made this move (at least in city records) but continued his pattern of constant travel, leaving Coburg for Bremen a week after the move was made. Milton returned from Bremen on 3 April 1933, but left Coburg again three weeks later, on 25 April 1933. This time, he headed to Dessau; archival records do not record a return to Coburg thereafter. There is no further listing of him in the Coburg Adressbuch.

In late 1933, Bella’s life changed significantly. In September, her sister Rosa Edelmuth left Coburg to join her husband Jacob in Dessau. Bella moved in briefly with her brother-in-law, Nathan Wertheimer, and his family at Löwenstrasse 23. A month later, she went to Marisfeld and Themar for a period of 6 months, returning to Coburg in March 1934. On 20 October 1934, Bella started to work in the kitchen at ‘Hohe Straße 30’, the boarding school for Jewish boys run by Hermann Hirsch.

The pace of departures quickened steadily: On 16 October 1934, just as Bella was about to begin her job at Hohe Straße 30, her father, Nathan Wertheimer, left Coburg to go to Dessau to live with Rosa and Jacob. Her husband, Milton continued to travel within Germany until the end of 1935; then, on 14 January 1936, he left Germany and immigrated legally into Holland. He lived in Amsterdam, initially at Muiderstraat 25 huis from 14 January 1936 until 23 July 1937. In June 1936, Bella’s brother, Julius, and his family left for the United States. In 1938, Bella’s brother-in-law, Nathan Wertheimer, his wife Elsa and young daughter Edith left for Buenos Aires. In early 1939, Rosa and Jakob Edelmuth, and 75-year old Nathan Wertheimer, left for Holland to live in Rotterdam where daughter Lotte Meder, née Edelmuth, lived with her non-Jewish husband. 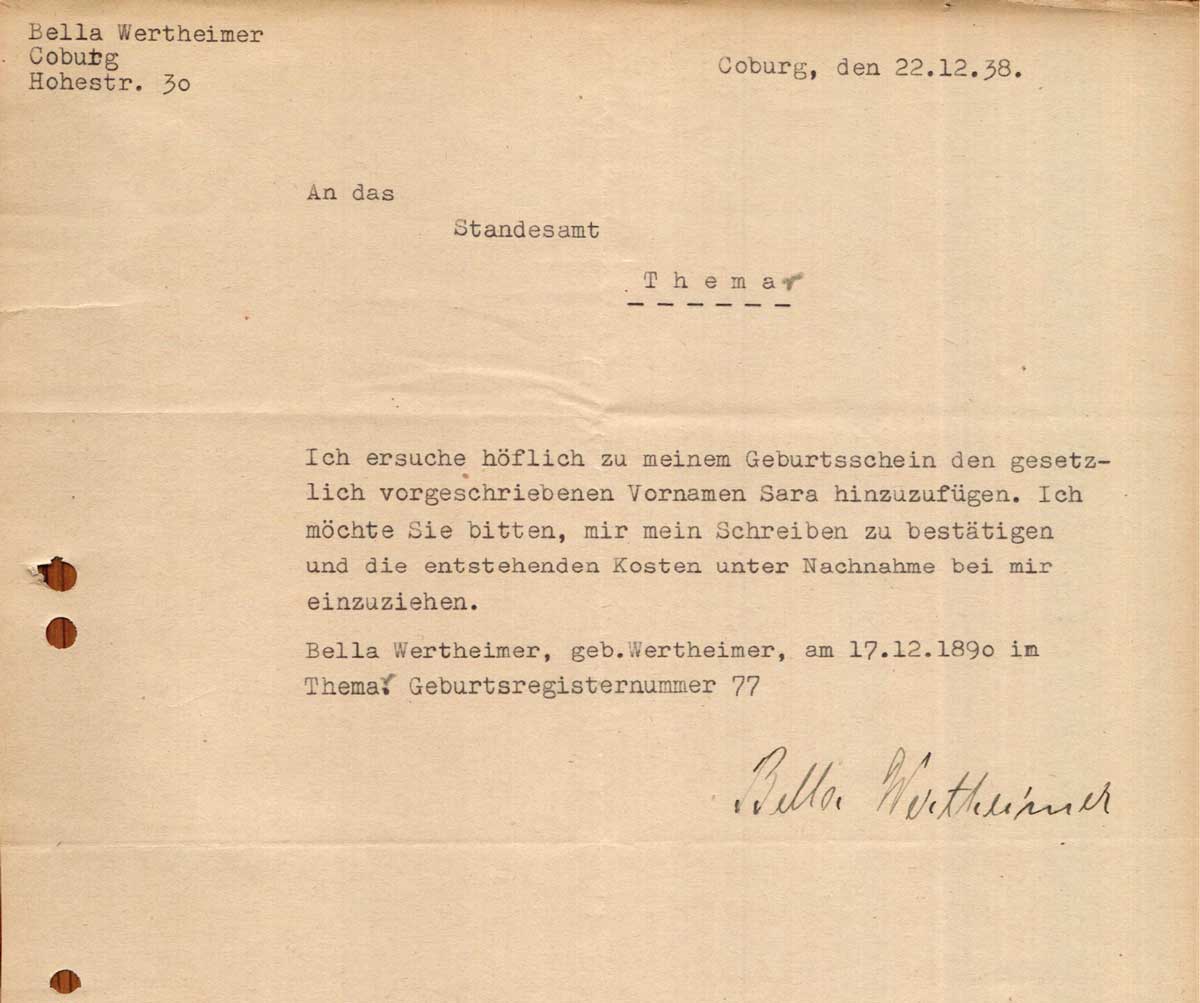 Whether Bella hoped to flee to America sponsored by her brother Julius, or to go to Holland to join her sister Rosa (and possibly husband Milton), we do not know. On 9 November 1938, in the rampage of Kristallnacht/Reichspogromnacht, the Jewish school where she both lived and worked had been smashed; Hermann Hirsch, the school director arrested and sent to Buchenwald; and the school closed. On 12 December 1938, Bella registered the addition of “Sara” to her given names in compliance with the law of August 1938 requiring male Jews to add “Israel” and females to add “Sara”. She sent letters to the Registrar of Themar for her birth certificate and to Coburg for her marriage certificate.

On 7 March 1939, Bella left Coburg and we find her bouncing back and forth between the towns of Marisfeld, Themar, Halle a/d Salle, and Meiningen. When the Nazis halted voluntary emigration in October 1941, her fate was sealed.

In May 1942, Bella was living in Meiningen at Sachsenstrasse 5-6, a “Judenhaus” or ‘Jew house’ into which Jews were forced to live. The deportation list below shows us that other members of Themar’s Jewish families — sisters Gertrud Stein (née Müller), a widow, and Grete Stein (née Müller) and her son Stefan/Stephan and daughter Erika — were also at this address. On 10 May 1943, Bella was deported to Belzyce Ghetto. She was murdered either in the ghetto or elsewhere close by in Distrikt Lublin. Bella Wertheimer, married, was 52 years of age. 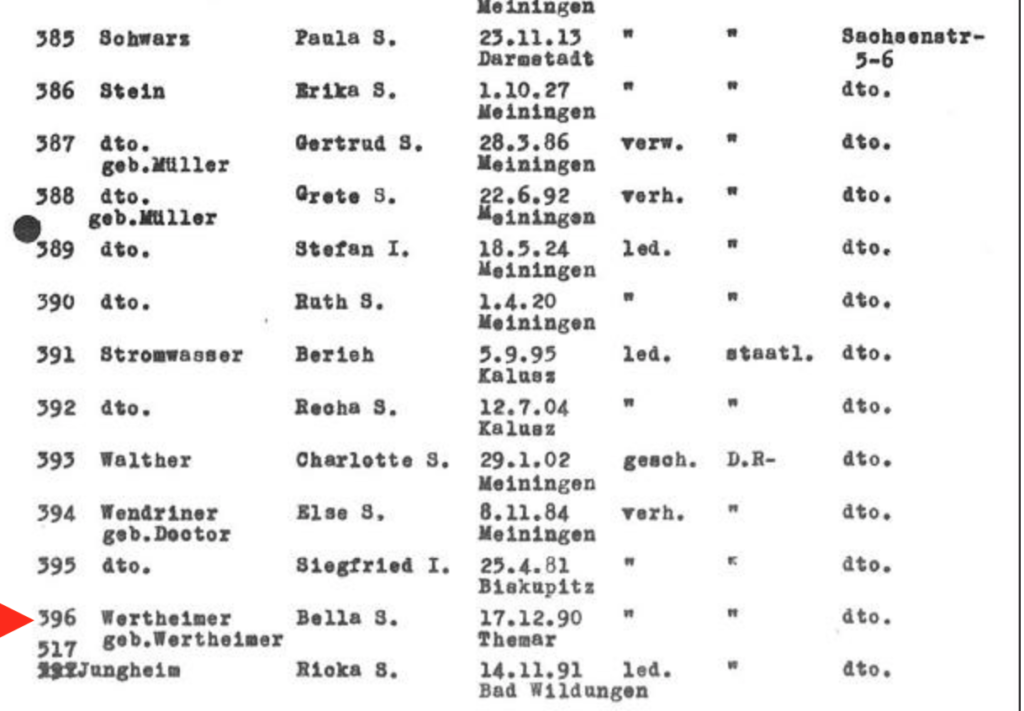 The trap had snapped shut on Milton in May 1940 when Germany invaded Holland. In Amsterdam, Milton lived at de Tugelaweg 20/I from 16 November 1942 until 10 March 1943. In March 1943, he moved to Vechtstrasse 139; on 21 April 1943, he was rounded up at Eerste van Swindenstraat 16 I, Amsterdam and deported to Theresienstadt Ghetto. He survived in the Ghetto for a year and a half but was then transported to Auschwitz on 9 October 1944 where he was murdered immediately upon arrival on 12 October 1944. Milton Wertheimer was 58 years old.

In the Jewish cemetery of Coburg is a gravestone honouring the deaths of Malwine Wertheimer, née Frankenberg, her daughter Bella Wertheimer and son-in-law Milton Wertheimer. No official records exist to explain the engraving of the names and fates of Bella and Milton on the stone. Ms. Schuller in Coburg believes that the stone was probably erected in 1927, the first Jahrtag after Malwine’s death. At this time, Malwine’s husband and all three of their children were living in Coburg. The grave site is clearly intended for two, for Nathan to lie by his wife. But who underwrote the engraving of Bella’s and Milton’s names and fates after the war is unknown. The errors in the information about Bella’s and Milton’s fate probably reflect the knowledge of the Holocaust at the time the engraving was done: little was known about the 1942 deportation from Thüringen to Belzyce until well into the 2010s, and the use of Theresienstadt as a transit station to Auschwitz for German Jews also emerged slowly in common knowledge. It is a poignant, if curious, remembrance of Milton and Bella.

We would like to acknowledge the contributions of the following people:
The family of Edith Levy (née Wertheimer)
The family of Heinz/Henry Wertheimer
Gaby Schuller, Coburg
Lisa van de Beek
We welcome any further information about the Frankenberg and Wertheimer families. Please contact Sharon Meen @ s.meen79@gmail.com