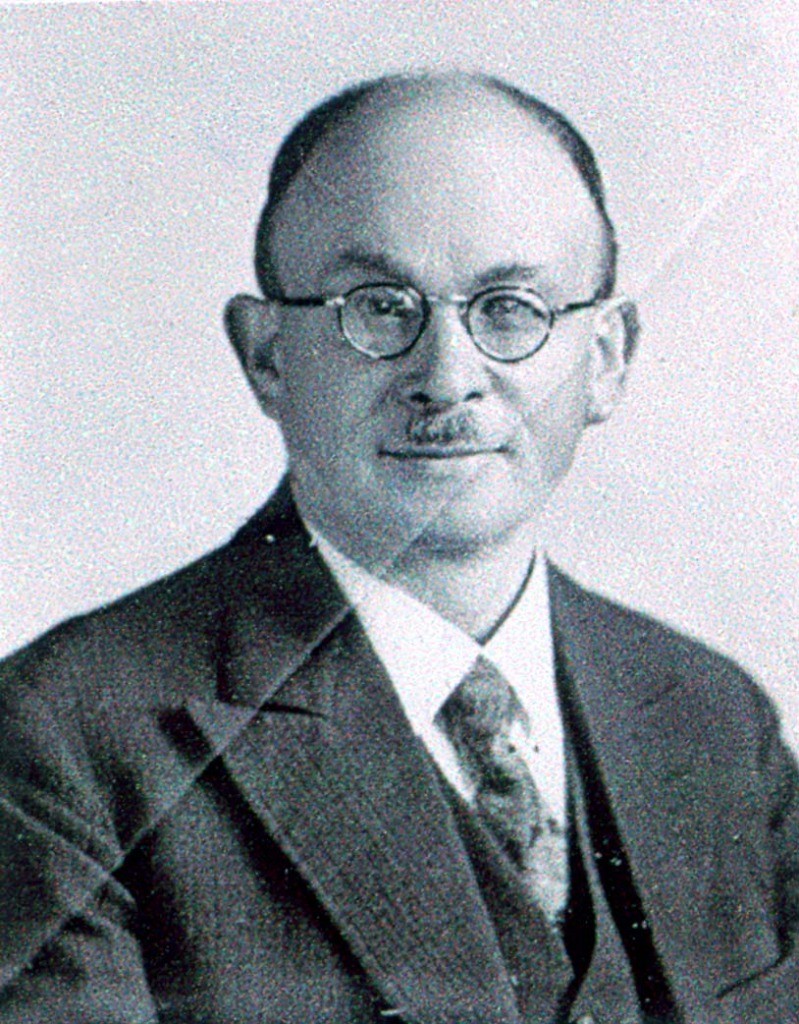 Hugo Friedmann was one of nine (9) children born to Salomon and Johanna Friedmann between 1868 and 1881. Salomon Friedmann was a Lehrer, that is, a Jewish teacher who worked in smaller communities that were not large enough for a rabbi. The birthplaces of the children — Ottensoos, Altenstadt, Neu-Ulm, Neunkirchen and Illingen — indicate Salomon’s various appointments. During the 1870s, the Friedmann family lived in Bavaria, in towns and villages close to Nürnberg. Most centres — with the exception of Neu-Ulm, Hugo’s birthplace — had populations of under 1000. In 1881, the family moved away from Bavaria to the Saar region of Germany, where, according to the Illingen page in alemannia-judaica hints, Salomon Friedmann was Lehrer of the Illingen Jewish community (of about 200 people) from 1885-1895.

Knowledge of the lives of Hugo’s brothers and sisters helps us to understand aspects of the story of Hugo and Eva Friedmann as well as the stories of similar German Jewish families in the nineteenth & twentieth centuries. Some patterns are similar; as one example, the pattern of significant rates of death among infants and children; we know that at least two of Salomon’s and Johanna’s children did not survive childhood. The pattern of movement provides further evidence of the mobility of German Jewish families in the nineteenth century, a pattern that Hugo and Eva would replicate in their lives. We also see similar strategies implemented to meet socio-economic goals: with other families described in these pages, such as the Gassenheimers and the Mayers, we see how children — usually the older sons, but still young and unmarried — left Germany to seek success, usually in America. But Hugo’s family illustrates a variation: Adolf, who emigrated in 1899, was indeed the eldest but, at 29 years of age, was significantly older than average and was already married with a child.

As was typical for many women, Jewish and Christian, the Friedmann daughters married and moved to the hometowns of their husbands. But the moves of Klothilde and Adèle were also a form of migration out of Germany and thus introduce us to an intriguing pattern not found among our other Themar families. Hugo’s elder sister, Klothilde, moved to Luxembourg in the late 1890s and formed a family with Arthur Wolff. This, combined with Hugo’s marriage to Eva Kahn, born in Luxembourg, clarify the long-standing links which both Hugo and Eva had with Luxembourg. Second, we learn of the early link to Belgium through the family of Adèle Kuperman, née Friedmann, who married Maurice Koupermann of Brussels. 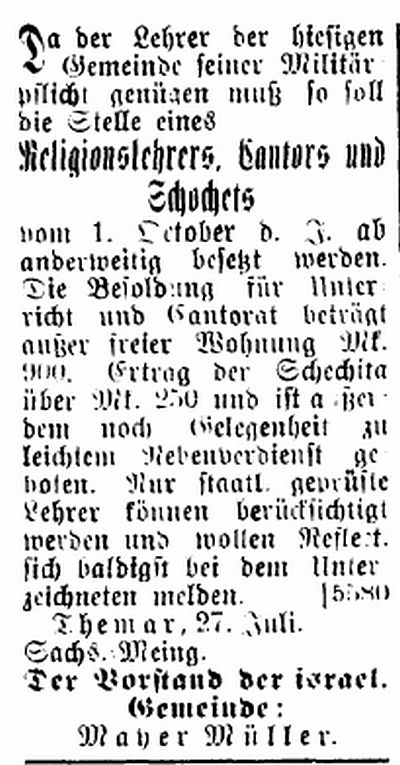 Hugo Friedmann was born in 1876, the fifth child of Salomon and Johanna; his immediate family included two sisters, Klothilde and Adèle, and one brother Adolf; just two months before Hugo’s birth, Louis, one-year old, had died. While Hugo was born in Neu-Ulm, Bavaria, a city of some 9,000 people, he probably grew up in Illingen. On 1 October 1892, according to Willi Körtels, Hugo Friedmann started study at the Königliche Schullehrerbildungsseminar in Würzburg and completed his teacher’s certificate in July 1895. “Friedmann’s first posting was in Illingen, and then in August 1896, he came to Schweich in the Mosel Valley, which had a Jewish community of about 90. Here his duties were those of Lehrer/Kantor & Schochet. Initially he taught 17 students but this number increased to 20 in 1897, 15 girls and 5 boys. His work earned the school an excellent reputation but the District Inspector considered ‘Friedmann still something of an apprentice whose skills required further development.’ In April 1898, Hugo left Schweich and moved on to Wetzlar.”

We believe that Hugo came to Themar on 1 October 1900 to fill the position advertised in the 27 July 1900 edition of The Israelite newspaper: “Since the present Lehrer must leave the community to do his military service,” the ad read, “we are looking for someone to be Lehrer/teacher, Kantor, and Schochet/ritual butcher. In addition to room & board, the salary as Teacher and Kantor is 900 marks. Payment for ritual slaughtering is about 250 marks and opportunities for further income is possible. Only state-certified teachers can be considered and we ask that candidates submit their applications as soon as possible.”

In 1909, Hugo accepted an appointment in Bernkastel-Kues, a small city of about 4500 residents. The Friedmanns lived in the synagogue building at Burgstraße 7. Hugo’s responsibilities here both similar and dissimilar to those in Themar: on one hand, he was responsible for various Jewish congregations in small villages north on the Mosel: Lösnich (1909=28 Jews), Rachtig(1929=34 Jews), Zeltingen (1924=25 Jews). On the other hand, the Jewish population of Bernkastel-Kues showed more advanced signs of the numerical decline affecting Jewish communities than did Themar, as Jews either migrated to larger urban centres in Germany or emigrated from Germany altogether. The Bernkastel-Kues congregation numbered about half of what it had been in the late 1800s.

Hugo Friedmann published several books in the 1920s among which was a 1927 Festschrift, Die Jüdische Gemeinde in Berncastel-Cues: ein geschichtlicher Rückblick/The Jewish Congregation in Bergsattel-Cues: an historical Review to celebrate the 75th anniversary of the dedication of the Bernkastel-Kues synagogue. In 1929, he published the Verstorbenenlisten der jüdischen Gemeinden der Mittelmosel von Wintrich bis Enkirch, Bernkastel-Cues/A Listing of the Dead Jews of the Congregations of the Middle Mosel Region from Winterish to Enrich, Bernkastel-Cues.

When the Nazi Party took power in 1933, most Friedmanns were in Europe: Klothilde in Luxembourg, Adèle in Brussels, and Hugo in Germany. Three of Hugo’s and Eva’s children responded to the threat by leaving Germany: in 1936, both Johanna Lang, with her husband and two children, and Bruno left for South Africa; Friedrich moved to Belgium. Sitta remained in Germany; in 1934, she married Ernst Lewin, a businessman in Falkenburg and moved there to live. Ernst hoped, we believe, that his status as a World War I decorated soldier would protect him from persecution. Hugo and Eva remained in Germany until 10 October 1938. But a month before the Reichspogrom destroyed the synagogue, which Hugo had tended for 30 years, Hugo and Eva left Bernkastel-Kues and Germany for Luxembourg. Family members were relatively close at hand, including, according to the 1940 Census of (at genami.org,) Klothilde and Arthur Wolff, daughter Johanna Deutsch, and son Léon and his wife Sophie, as well as Karl, a widower

As the German menace grew, members of Hugo’s family moved to France, hoping to find refuge there. Adèle Kouperman moved to Cahors to be with the family of her daughter, Olga and Paul Bernheim, and Klothilde Wolff’s children, Johanna/Jeanne Deutsch and Leon Wolff moved to Béziers. Karl Friedmann remained in Luxembourg and, according to Yad Vashem, Klothilde did as well.

The Shoah cut deeply into the Friedmann family: Hugo Friedmann, Eva, and Hugo’s brother, Karl, were deported on the same transport on 16 October 1941, the first transport of Jews from Germany to the ‘east’, to Litzmannstadt [Lodz] Ghetto. In May 1944, Adèle Kouperman, daughter Olga Bernheim with husband Paul and daughter Jacqueline, were deported to Auschwitz. Two of the Friedmann siblings were murdered: Hugo in the Litzmannstadt Ghetto on 13 June 1942 and Adèle Kouperman in Auschwitz. Karl Friedmann, the youngest son, was also murdered in the Litzmannstadt Ghetto, although the exact details are not known. The last trace to be found of him in available records is in a JewishGen database:  Klothilde Wolff, Hugo’s eldest sister, survived the war and lived until her death in 1957 in Ettelbrück.

The grand- and great-grandchildren of Hugo and Eva Friedmann — and of other of Hugo’s siblings — live throughout the world. It is our hope that this page honors their memory as well as teaches us more about the Jewish community in Themar!

ACKNOWLEDGEMENTS
We wish to thank the families of Hugo and Eva Friedmann’s children — Johanna, Friedrich, and Bruno — for their contributions to our knowledge. Henri Friedmann’s submission of Pages of Testimony in 2008 to honour his aunt and uncle and cousin — Sitta and Ernst Lewin and their son Joachim — provided critical clues that guided the research and growing knowledge of the family.

We also wish to thank two researchers for their contributions: first, Dr. Marianne Bühler provided new information to our knowledge of the family in Bernkastel-Kues and dates of marriage, departure, etc. Her work on the Jewish community of Bernkastel-Wittlich can be found here.

The new information from Dr. Bühler led in turn to contact with Linda Licina-Gedink who leads a project for the Medernach Municipal government is, as she wrote in April 2014, “to try and compile all persons that were born, married or died in Medernach, and this by entering the details from civil acts one-by-one. I have finished now all the acts that are available from Medernach on www.familysearch.org (till 1923) and I am now trying to complete the picture by finding out, where those people who did not stay in Medernach have landed.” Her project results can be found at: http://medernach.myheritage.com.