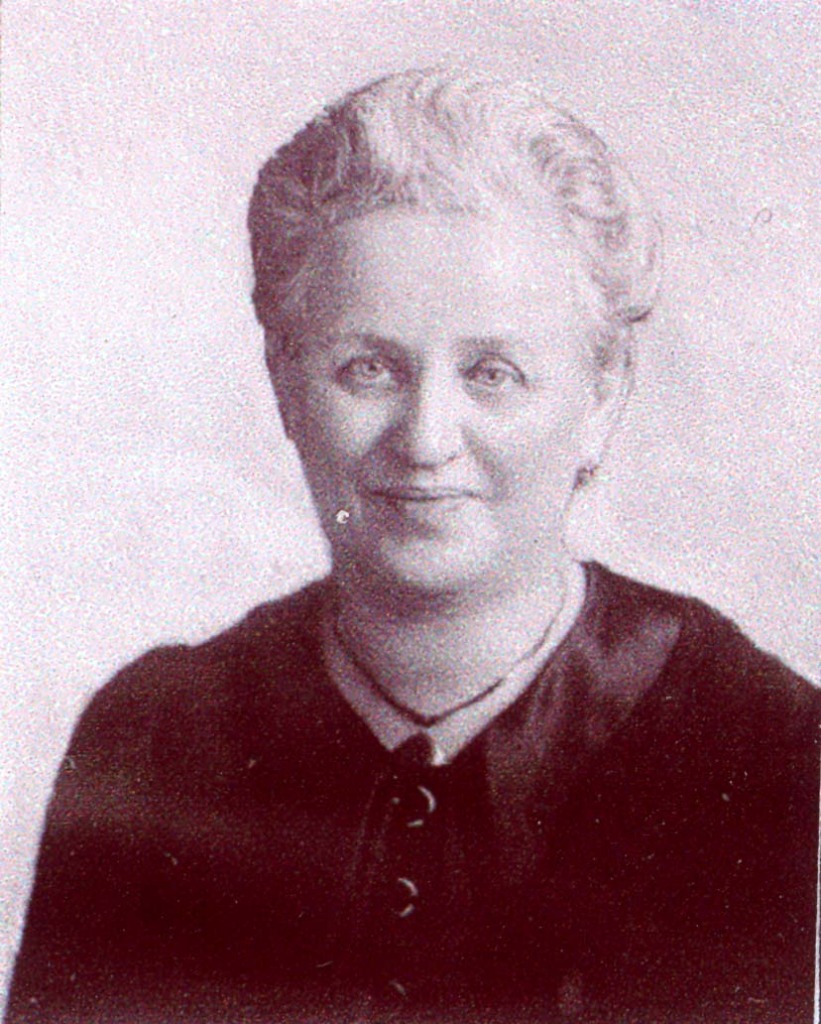 Eva Friedmann, née Kahn, spent less than a decade of her life in Themar as the wife of a Jewish Lehrer. She bore four children in the small city and then moved with them and her husband, Hugo, to Bernkastel-Kues where she spent most of her adult life.

We will probably never know much about the details of Eva’s life in Themar, nor will we know what Eva thought of Themar. But thanks to research projects in Luxembourg, where Eva was born and grew up, we know quite a bit about the world that shaped her. And knowing some detail about Eva and her family background provides us with glimpses into the world of Jewish women who lived in Themar and in other similar small urban centres, both in Germany and in other European countries where German-Jewish families lived such as Luxembourg, in the early twentieth century.

First of all, an enormous Thank You! to the Syndicat d’Initiative et du Tourisme Medernach and the online genealogical project it is sponsoring. According to project leader Linda Licina-Gedink, the goal of the project is “to try and compile all persons that were born, Aarried or died in Medernach . . . by entering the details from civil acts one-by-one. I have finished now all the acts that are available from Medernach on www.familysearch.org (till 1923) and I am now trying to complete the picture by finding out, where those people who did not stay in Medernach have landed.” Her project results can be found at: http://medernach.myheritage.com. Linda provided us with links to archival resources and scholarship about the Jews of Luxembourg that made for fascinating research. 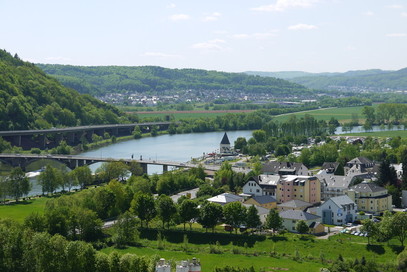 Eva’s family was a German-Jewish family, with roots deep in the Mosel Valley near the town of Schweich. According to family members tracing the Kahn genealogy, “Our earliest direct ancestor so far is Raphael Kahn, born in Schweich, Germany in 1725 +/- 5 years. In 1747 he married Brendel Joseph Levy (born Schweich about 1725). They had five children: Nathan, Schielen, Esther, Feist, and Bernahardina.”  Schweich had a long-established Jewish community; In 1742, there were  seven Jewish families in Schweich and an 1843 Census counted 90 Jewish residents.

Descendants of Raphael and Brendel Kahn started to move from Schweich into Luxembourg in the early years of the nineteenth century. There were, according to Marc Schoentgen’s portrait of the Jews in Luxembourg, very few Jews in Luxembourg in the early 1800s — his figure for 1818 is 33 families for all of Luxembourg. Among the first was grandson Lazar Kahn, b. 1789 in Schweich, the son of Feist. He moved in 1816, and, according to the family website, became “a merchant, renting out horses and carriages. He is believed to have fought for Napoleon and to have been awarded La Medaille de Ste Helene (the Napoleon Medal) for surviving.” Success of these early migrants prompted further migration of Jewish families from neighbouring countries, particularly Germany. Great-grandson Berman Kahn, b.1823 (and Eva’s grandfather) made the move in the early 1850s; he and his wife, Rachel/Rosa (born in Bosen), settled in Medernach and had their first child, Nathan, in 1852, and a second son, Aron in 1854.

Nathan and Aron both remained in Medernach, married and raised families. Nathan married Sara Levi, born in Germany, and Eva, b. 1877, was their eldest  of six children. The 1887 Census below identifies Nathan and Sara and their four living children; two children had died: Louis, b. 1883, had died two years later; Cecile, a daughter, had died in infancy in 1886.

Eva was twelve years old when her mother, Sara, died in January 1889, age 35, (Sara’s grave, pictured at right, is one of the oldest in the Jewish cemetery of Ettelbruck.) Her father, Nathan, remarried in August 1892, and his second wife, Mathilde (née Kahn) was also German-born, from Kirl, north of Dortmund. Their first child, Sophie, was born in 1893 followed by two sons, Albert Marcus, b. 1895 and Otto Berman, b. 1901.

Eva was 24 years old when she married Hugo Friedmann, a Jewish Lehrer from Neu-Ulm. Hugo had been Lehrer in Schweich in 1896 and, since many Kahn relatives continued to live in Schweich, Germany, it is possible that is where Eva and Hugo met.

Eva came to Themar after their marriage in January 1902; she became a German citizen because of her marriage to German-born Hugo. She lived in Themar during the first years of her marriage and the birth of four children. What her support system may have been is difficult to say but it was probably not family — to date we have found no connection between her family and other Kahn families in the area. She was miles from her family — Themar is over 400 km east of Medernach — and the demands of motherhood probably prevented her from travelling much, if at all. Eva’s mother, Sara, was dead and her father and his second wife, Mathilde, lived in Medernach but had their hands full with young children, Sophia, b. Albert Marcus, b. 1895, and Otto Berman, b. 1901.

The Friedmanns’ position within the Jewish community in Themar probably provided Eva and her children with support and company. As well, there were other young families in the city: Hugo and Klara Grünbaum, for example, had a daughter, Mira, in 1903; Martha Müller, daughter of Max and Frieda Müller, was born in 1906.

It seems safe to assume, however, that Eva welcomed the move from Themar to Bernkastel-Kues in 1909 probably because it brought her closer to ‘home’. It cut the distance to Medernach by three-quarters and Schweich, where other relatives lived, was only half an hour away. We would like to think that many of the years that Eva lived in Bernkastel-Kues were rewarding — the photograph of her and Hugo from which the Yad Vashem extract above comes suggests this — but we do not know for sure. Her children grew, and both daughters married and had children.

But whatever happiness there was disappeared in the 1930s. In the dark days of the Nazi Regime, Eva Friedmann returned to her hometown with her husband. Her family scattered: one daughter, Johanna, was in South Africa; the other, Sitta, was still in Germany in Pomerania. One son, Hugo Bruno, was also in South Africa; the other, Friedrich, in Belgium. In Luxembourg, her family included three brothers; they lived where they could find work. Emile unmarried, lived in Medernach, and the other two were married to sisters Elsa and Paula Kahn (born in Bärenbach, Germany) and with families.

The outbreak of WWII struck the Kahn family quickly: In February 1940, 1000 German Jews were deported from the towns of Stettin and Schneidemühle to the newly conquered area around Lublin as a first experiment in taking German Jews to their deaths outside of the German Reich. It appears that Jews from Pomerania, including Falkenburg where Sitta lived with husband Ernst and son Joachim, were also deported. When German administrators objected, the deportations were put on hold. The Jews from Pomerania were allowed to leave Lublin but were not allowed to return to Falkenburg. Instead they were forced to go to Berlin where their presence would be tolerated until such time as deportation of German Jews became the highest priority. Whether Eva knew of these developments  is unknown.

The conquest of Luxembourg by the German army in May 1940 shattered the family of Eva Kahn. While some members of Hugo’s family left Luxembourg for southern France, Hugo and Eva remained in Luxembourg as did Eva’s siblings; whether there was any possibility of their leaving, we do not know.

In October 1941, Eva and her three brothers, and their family members — eleven (11) individuals in all were on the first transport of German-Jews from Germany to the ghettos in the east; the destination was the Litzmannstadt Ghetto; Emile Kahn was the first to die in December 1941 in the ghetto hospital, and we believe that all eleven were probably dead by the end of 1942.

A year after her parents’ deportation to Litzmannstadt, Sitta and her husband and young son were deported to Theresienstadt. Sitta succumbed to typhus in early 1943; a year later, Ernst and Joachim were transported to Auschwitz to be murdered outright.

Eva’s other children were alive at the end of the war: Johanna and Friedrich continued to live in South Africa, and Hugo Bruno lived through the war, we believe, in occupied Belgium. In 2008, one grandson submitted Pages of Testimony to the Yad Vashem database which provided some key pieces of information to the story of his grandparents and aunt, uncle and cousin. We thank both him and Yad Vashem!

Nachkommenliste/Descendants List
The list below identifies the members of the family of Berman and Rachel/Rosa (née Hertz) Kahn.