„A few words from the only survivor here from the Baer, Stern and Plaut family who actually lived in Themar. I was born in June 1935 in the Meiningen Hospital which I believe was not too far from here. My German birth certificate read Hanna Karola Sara Plaut which was changed to Carole Hannah Plaut when I became an American citizen. You might recall that German Jewish girls had to include Sara in their birth certificates and Jewish boys added the name Israel.

I spent the first five years in Themar and do not remember too much.

However, I do recall looking out of a window from my home at Markt 8 in Themar as my father Artur Plaut was being taken away on November 10, the morning after Kristallnacht, to Buchenwald. I seem to recall my mother, Elly, saying to my grandmother Selma, „Halde mal das Kind.“ I apparently understood „wir behalten dass Kind” and I was quite shaken up when I heard these words.

Permitted to leave Buchenwald, my father was told to get out of Germany which he did by leaving for England early in 1939, leaving behind my grandmother, Selma, my mother Elly and me in Themar.

One of the incidents I was told about was that one of our neighbors passed us on a street. I asked my grandmother, „Why doesn’t Frau…. so und so…. say Guten Tag to us anymore?“   My   grandmother   replied,   „Weil   wir Judisch sind.“ And I asked, „Was waren wir before?“ There were more incidents but I won’t mention them now.

As I said before, my mother Elly, grandmother Selma and I were left behind in a not too friendly Themar but soon were able to head for Berlin. There we shared an apartment with other Jewish people also trying to get out of Germany.

My mother and I left Berlin by train to Lisbon, Portugal. From there we sailed in August 1941 to the United States.

My mother and I were reunited with my father in 1942, after three years, when he arrived in New York from England.

Unfortunately and very sadly, “meine sehr gute Oma Selma” did not get out of Germany. She was deported from Berlin and killed in the Riga Concentration Camp in 1942. Someone from Germany sent my parents a telegram stating „dass Selma ist verreist!“ We knew what that meant!I don’t think I really ever got over this loss. I really loved my Oma.

My parents rarely discussed the Holocaust with me. The events were too sad and terrible/horrible to discuss. It left a sad void in my life and perhaps for many others too.

Thankfully, my parents had a good life in America and so have I. I have a lot to be thankful for. I had a wonderful husband and have a great son, Stuart, a terrific daughter, Diane, two lovely grandchildren, Nathan and Ariella, and I must not forget my dear son-in-law Martin. my family.

I want to thank you all for giving us this chance to remember my family. 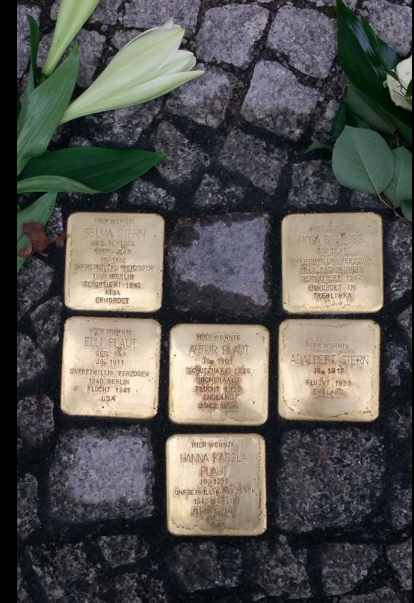 And I sincerely hope that Germany and all of mankind has learned a lesson from those cruel and torturous years.We must continue to live in the present and look forward to the future. The past is beyond change.