For over a century, members of the family of Salomon & Karoline Friedmann Müller played an important role in the lives of the Marisfeld and Themar Jewish communities. They became part of the Marisfeld community in the late 1820s; in the late 1860s, Müllers were among the first to come to Themar. Then they were among the last to leave both Marisfeld and Themar, close to eight (8) decades later.

Salomon Müller was born 12 January 1802 in Bauerbach, Thüringen, about 20 kilometres west of Marisfeld. In the late 1820s, his father, Meyer, was posted to Marisfeld as Lehrer/religious teacher. Salomon was in twenties at that time and it is probably during this period that he met Karoline Friedmann who was born in Marisfeld. When Salomon and Karoline married is unknown. They had four children: Dina, Mayer and Nathan, and Simon. Of the four, we know only the birthdates and stories of two sons, both born in Marisfeld: Mayer, b. in 1849 and Nathan born 1851.

Salomon, Karoline, Mayer and Nathan all played critical roles in the lives of both the Marisfeld and Themar Jewish communities. Available records make visible the following contours: it seems clear that Salomon Müller, age 64, was among those who left Marisfeld in the years after 1866, after fire had reduced much of Marisfeld to ashes. Whether either Mayer and Nathan accompanied him at this time, we do not know. Mayer was 17 in 1866, Nathan 15; both would have finished school and may have been in apprenticeship elsewhere in Thüringen or Germany. We know that Mayer lived most of his adult life in Themar, from at least 1873 when his first child was born, until 1907. Nathan spent his adult years — 1876, or earlier, until his death in 1923 — in Marisfeld. 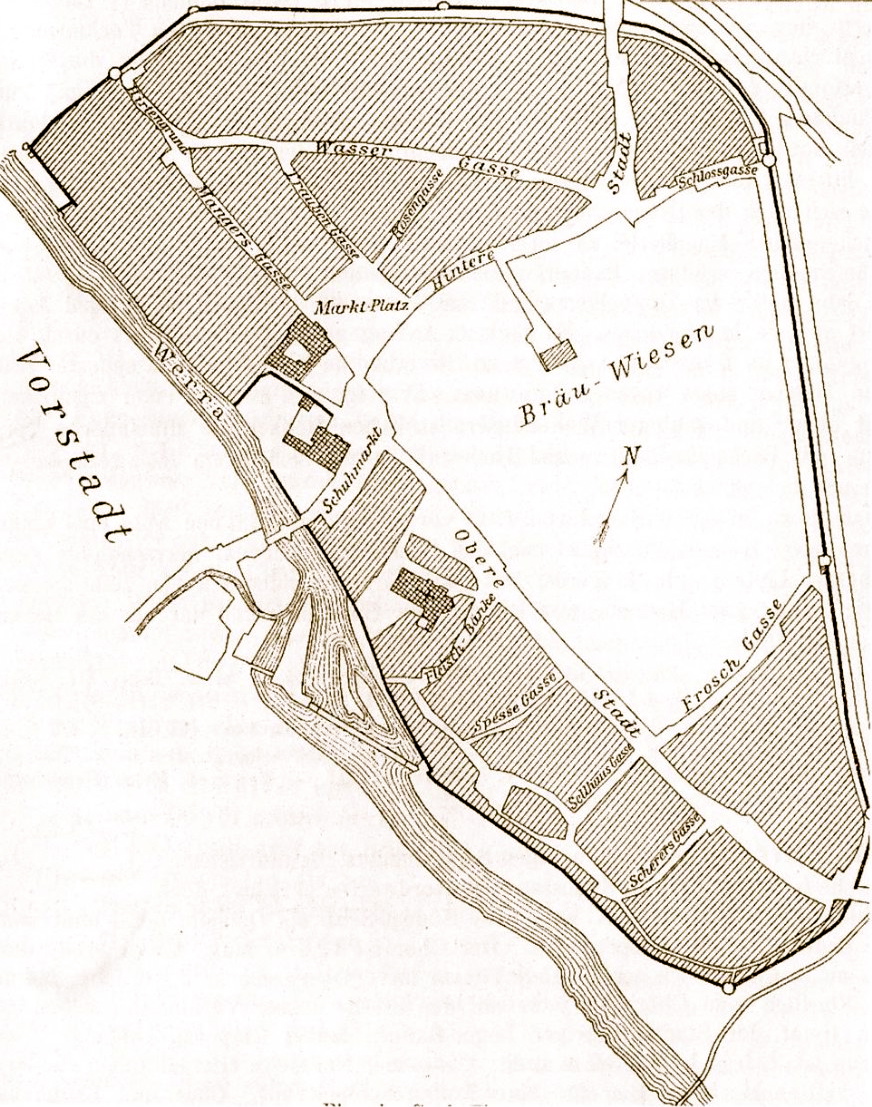 Map of Themar, 1903 shows the undeveloped meadow running to the south of Bahnhofstrasse and the Marketplace at the time the Müllers started their business. 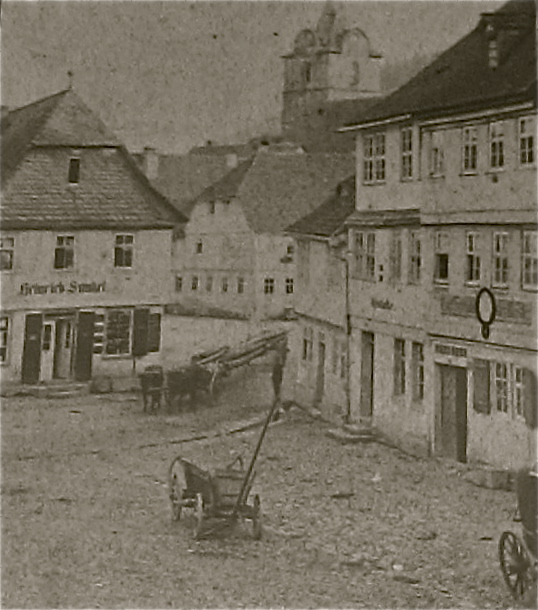 This early photo, taken of the Marktplatz not far from the S.M. Warenhaus gives some sense of the state of the roads at the time the Müllers opened for business. Source: City of Themar.

Where exactly the family lived in its earliest years in Themar is still unknown; the most plausible theory is that they rented space in one of the buildings on the west side of Hinterestrasse, or “Back Door Street,” as it was called, meaning the street that led out of the market square and wound to the north-west part of the city to the Hinteres Tor or Back Gate. Previously a huge barn had occupied the land for the livestock that grazed in the meadows surrounding the street; as Rudolf Lommer remembered it, “pedestrian traffic in the street was to all intents and purposes closed during the fall threshing.”

In 1872, Warenhaus S.M. Müller opened for business; the initials, “S.M.,” we believe, stand for the names Salomon Meyer, Meyer being the name of Salomon’s father and probably part of Salomon’s name. The business flourished in Themar growing along with the small city’s population, which reached close to 1800 by the time of Salomon’s death in 1890. The entire community shopped at the store. 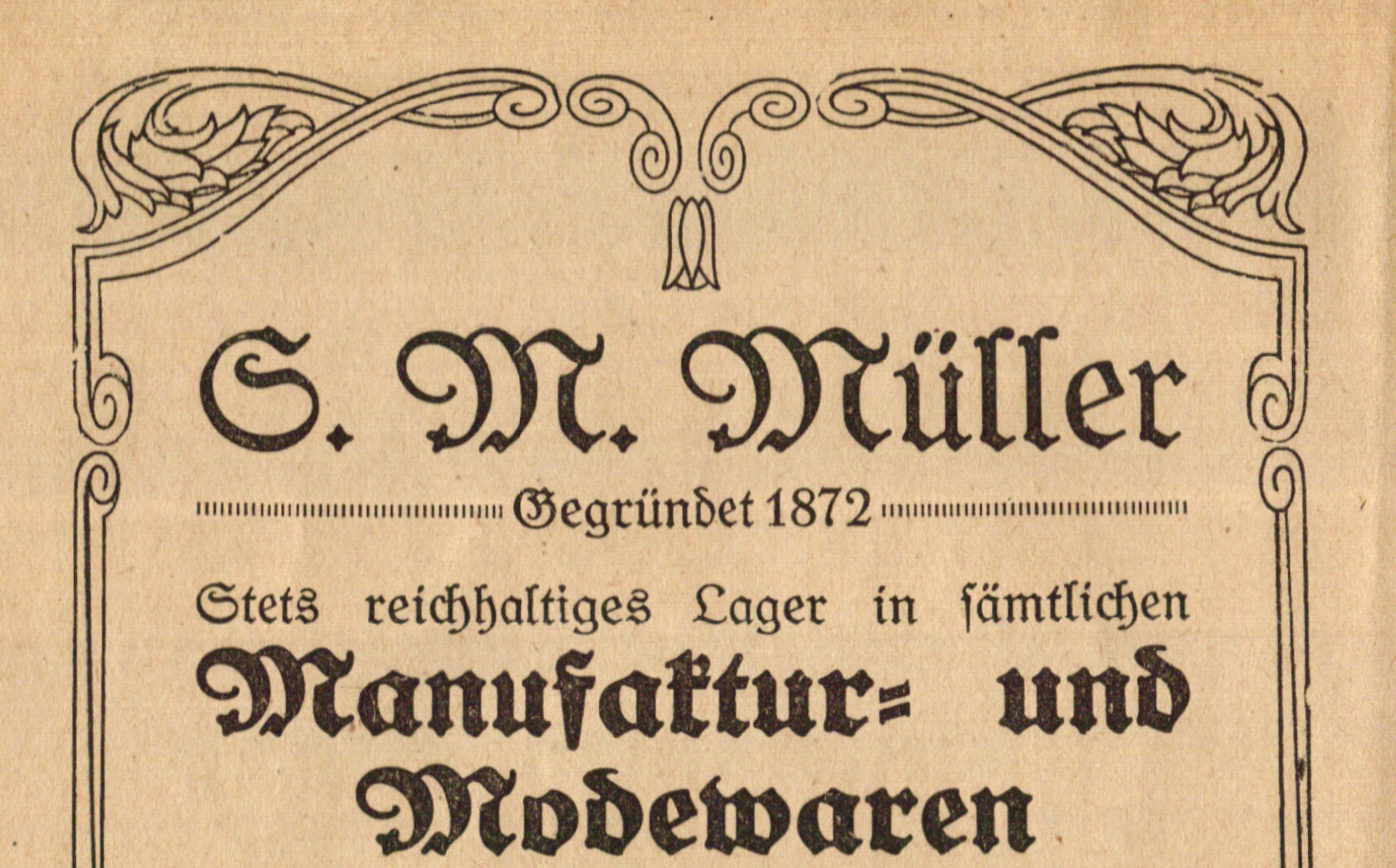 Salomon Müller died in 1890, age 88, after living two decades in Themar; he was buried in the Marisfeld Jewish cemetery. His wife, Karoline, is buried next to him but time has erased the inscription on the stone.

At the time of Salomon’s and Karoline’s deaths, the next generation of Müllers was making its mark on Marisfeld and Themar. Mayer Müller lived in Themar with his wife, Babette Friedmann; between 1873 and 1886, seven children were born to them, although only six of them lived beyond infancy. Likewise, between 1878 and 1892, Nathan and Bertha Müller were raising six children in Marisfeld.

The lives of this generation would weave through the history of Marisfeld and Themar for another five decades, until 1942. After that, no member of the Solomon and Karoline Müller family lived in either community. Significant numbers of them, however, flourished in other parts of the world. For an Ahnentafel of those Müllers and their families born in Germany up until 1945, please see here. 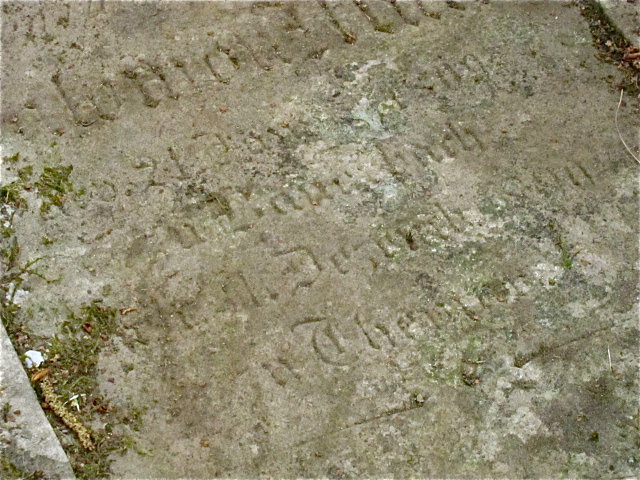 The following pages provide more information about the various branches and individuals of the Müller families:
The Müller Family/The Family of Mayer and Babette Friedmann Müller
The Müller Family/Nathan and Bertha Schwed Müller of Marisfeld
The Family Outline or Ahnentafel of the members of the S&K Müller family who were born in Europe before 1945 is available here.