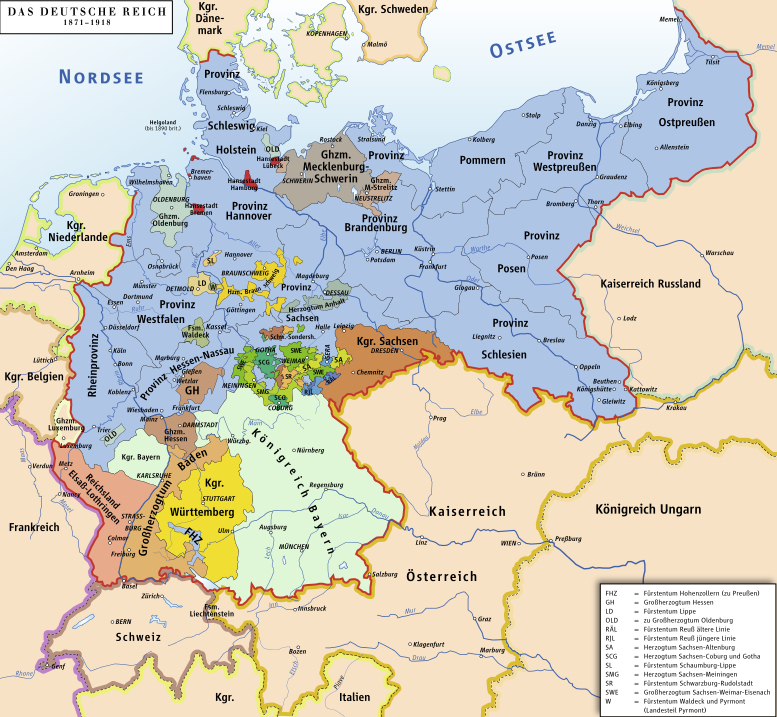 With the creation of the German Empire in 1871, a census of the entire population was deemed necessary. It took place on 1 December 1871; 41.1 million individuals were registered, and the citizens of Themar — in the small state of Sachsen-Meiningen (“SMG” in the maps) — were included in the count. 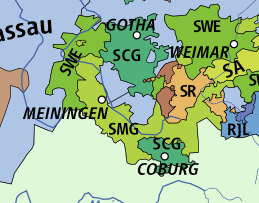 “The member states of the Kaiserreich had to furnish information on certain variables to the Statistisches Reichsamt, but were free to collect more information. The sole condition was that the census had to be conducted from house to house, and using household or individual sheets.

Absent persons were to be named and their positions in the household were to be indicated. In most of the states, the exact date of birth was noted. In many states, physical and mental deficits were noted, and in Prussia, the literacy of persons over age 10 was recorded.”

Unfortunately, the Themar City Archives do not include a copy of the Census results but the available scholarship states that the number of Jews in Themar numbered 93 men, women, and children.

On the basis of available data — including births, deaths, and marriages as well as other indicators — we have constructed the list below; we believe that it includes the names of the Jews counted in the 1871 Census. At present, our list totals 90; should anyone reading this page know of some name which has been missed, please contact us.

What does the 1871 Census tell us about the Jewish community of Themar? First and foremost, the community had grown rapidly in the decade, its growth owing to in-migration of family units. Some families, such as that of Löb and Jette Frankenberg, were complete while others, such as Samuel and Lotte Gassenheimer would have more children during the 1870s. The community showed promise of future growth: nineteen (19) births had occurred in Themar since 1862, the year we can place the first birth in Themar, that of Hermann Walther.

The families came primarily from Marisfeld, from families that had deep roots in the area, often stretching back into the early 1700s. Most adults had been born in Marisfeld; six had been born in Walldorf, Bibra and Breach, and five elsewhere (the birthplace of nine is unknown). With one exception, Salomon Müller who was born in Bauerbach, those adults born in other centres were women such as Jette Frankenberg, born in Henrichs.

The families intended to stay in Themar; this we know from hindsight. With the exception of the Wangenheims, Sophie (née Hofmann) and Heinemann, we recognize these families as the ‘core’ families of Themar’s Jewish community, that is, who were there from the beginning of the Jewish community in the early 1860s until its end in the late 1930s/early 1940s. Children and grandchildren might move elsewhere but at least one branch of each family remained in Themar.

Notes on the table headings:
CORE = identifies the Themar family to which the individual named belonged. There were 15 Core Families in Themar; that is, 15 families who were there from the beginning of the Jewish community in the early 1860s until its end in the late 1930s/early 1940s.
FAMILY NAME = In this column, we include the future married name of the woman in brackets.