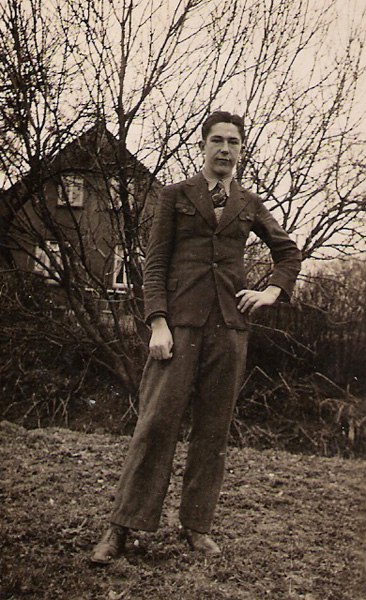 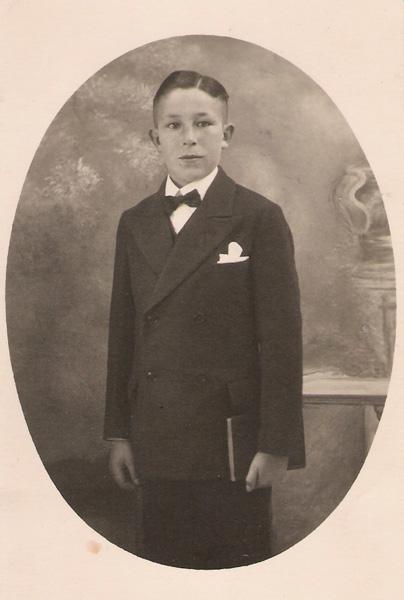 135. Kurt Schubert on his Confirmation 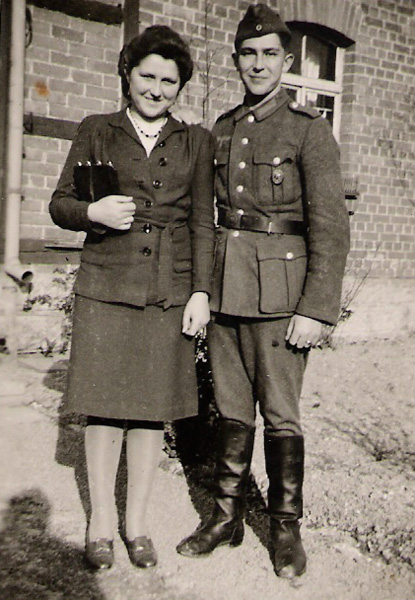 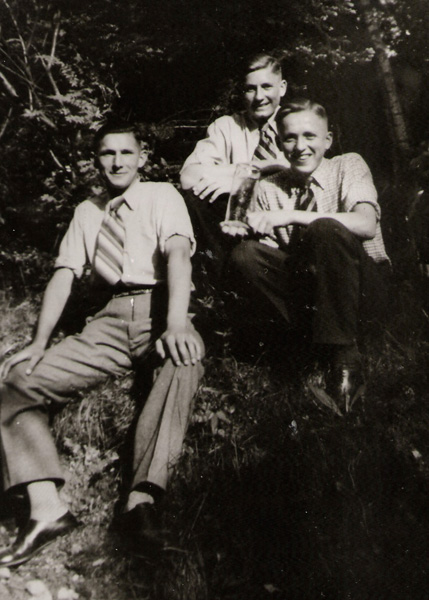 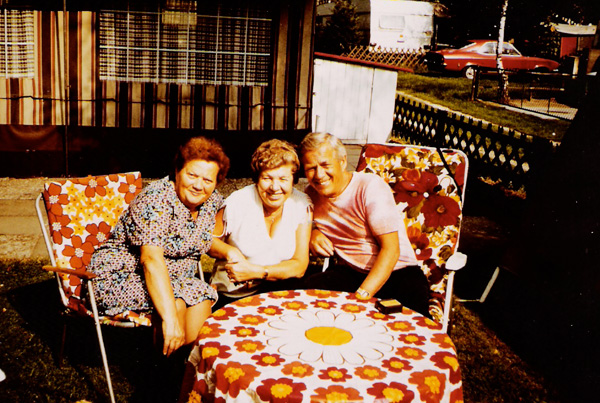 Walter, his brother and I played together in the Mauergasse, they lived 4 houses from us. They were very poor, my mother often gave them something to eat, although we did not have much ourselves. The father of these boys was so desperate, that he committed suicide in a horrible way, he hung himself on the crossbars of a window and must have died very slowly, because he kicked a big hole in the wall. I will never forget that wall. Walter wrote me completely unexpectedly from Braunschweig, West Germany, after a reunion in Themar. 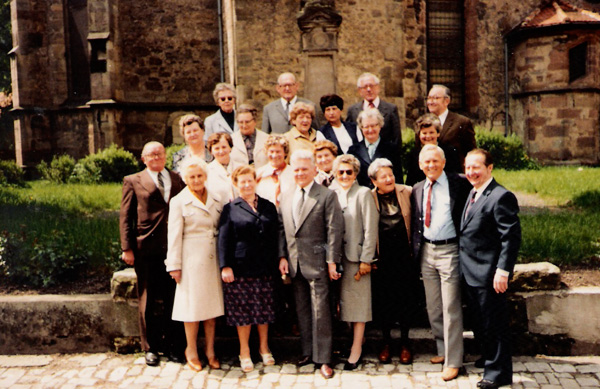 142. 1984 class reunion, Themar, in front on the 1870-71 War Memorial and St. Bartholemew’s church in Themar. Walter Gütlein is front row, second from right.

Concluding Comment
The photo album stops with this photograph of Walter Gütlein. Presumably Manfred intended to keep adding to the album, but lots of projects competed for his attention: he assembled other photo albums — of his father’s family, the Rosengartens of Herbede, Witten; of the Berlin family of his wife, Eveline Berger; of the trip from Genoa, Italy in May 1939 to Shanghai; of life in Shanghai, 1939 to 1947; and of life for the Rosengartens in the United States from 1947 on.

The focus on Themar shifted from the photo album to the ongoing exchange of letters to his non-Jewish school chums. The number of people actually writing letters to Manfred increased in size after 1983 to include two former Themarens now living in West Germany. But, as I learned on my first trip to Themar in April 2008, the number of readers of Manfred’s letters was much, much larger. A letter from Manfred would be circulated among many of the city’s residents who wanted to keep in touch with his news. I was surprised and pleased to see that Manfred’s first letter to Themar, in August 1983 to clockmaker Saam, was already in the City of Themar archives. These letters, it is hoped, will also be made available on this website.

Manfred did not, therefore, write a formal endnote to the album and somehow that seems just right — his voice lives on and the story continues. If I am allowed to add two photographs to the album in this virtual world, then let me add these two — of Willi Förster, Manfred’s dear friend, and myself — as we explore Manfred’s photo album and the memories it prompts!

I remember, when it was built in 1933. I made some comments about that in a letter to Irmgard,
but of course in German, so somebody has to translate.

Most of these boys went to school or played with me, some are still alive, most of them perished in WW II. With some I had bloody fist fights. The Ross brothers, everybody thought they were twins. They were not, only very close in age. Their father was sent to Themar from the Black Forest to be the leader of the local Storm-Troopers. These boys taunted me on the 30th of January 1933 with “Atrch Hitler is dran,” “Ha, ha, Hitler is in office.” It made me so mad, that I, for the first time in my life, started a fight. I literally saw red and beat both of them bloody. Some teacher tore me away and held me down. About Kurt Schubert, Karl Heinz Kerner, and Lehmann I wrote in other places. Herman Kaydel had a soccer ball, so we formed a soccer club, wandered from place to place as far as Lengfeld, to challenge other boys to games. His father was a druggist. 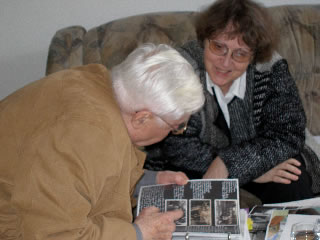 The sources used to update the information in Manfred Rosengarten, Themar, Thüringen: My Home Town, include private family archives as well as: