The roots of the Frankenberg family in Thüringen, or Sachsen-Meiningen as it was then called, trace back to the early 1800s when Nathan and Regine (née Neuberger) Frankenberg settled in the village of Marisfeld. Nathan had been born in 1770 ini Wüstensachsen in Hesse, and Regine 1788 in Mühlfeld. When exactly they arrived in Marisfeld is unknown but the birth of twins in 1810 gives us some sense. Between 1808 and 1822, Jonas and Regine had eight (8) children: the first two, twins, died stillborn in 1810; we know a little about Julius Frankenberg, b. 1823, who left Germany in 1854 for the United States. Of a child born in 1821, we know nothing.

Nathan and Regine remained in Marisfeld until their deaths, Natan in 1846; Regine in 1870. We know most about four children: sons Jonas, Löb, and Jacob Moses, and daughter Mathilde. All four remained in Germany; Julius’s emigration in 1854 was an anomaly in the history of the Frankenberg family. This suggests that they were able to find socio-economic security within Germany and did not choose emigration as a means of achieving success.

All four married and formed families in Marisfeld. The men married women from places other than Marisfeld; the daughter, Mathilde married a man from Marisfeld. Eldest son Jonas married Karolina (Abraham) Rosenbaum of Gleicherwiesen, and they had eight (8) children. Löb, b. 1816, married Jette Hermann of Heinrichs and they also formed a family of eight (8) children in Marisfeld. Jacob Moses, b. 1826, followed the pattern of his brothers: his wife was Luisa Mai, b. 1830 in Walldorf/Werra. Mathilde, b. 1818, married Jonas Wertheimer of Marisfeld,  and they had three (3) children.

Three of the four siblings remained in Sachsen-Meiningen for the rest of their lives. But only one of the three sons — the eldest, Jonas — remained in Marisfeld until death: Jonas died 84 in March 1897; Karoline in 1902, age 76. Löb and Jette and their children  moved to Themar where Löb died in 1894, and Jette in 1903. Jacob Moses and Luisa moved to Coburg where they died, Luisa in 1907 and Jacob Moses in 1916. While we do not where or when Mathilde and Jonas Wertheimer died, it was probably in Marisfeld, given that their eldest daughter, Henriette/Jette, lived in the village with her husband Abraham Kahn, and their family.

Jette Kahn, née Frankenberg, was, we believe the last Frankenberg to live her life in Marisfeld; with her death on 8 March 1936, there were no more Frankenbergs in Marisfeld. They lived throughout Germany, as the map below illustrates. 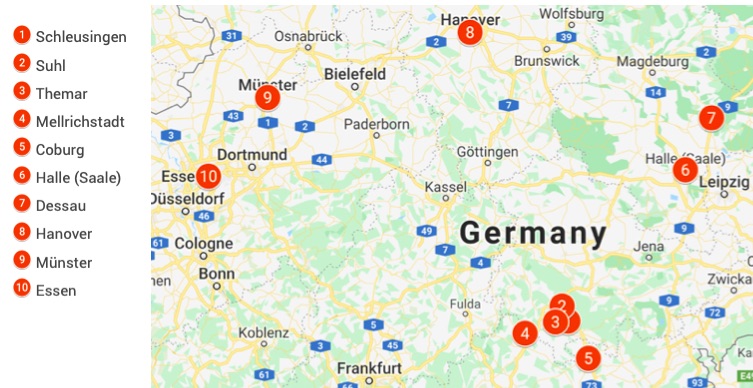