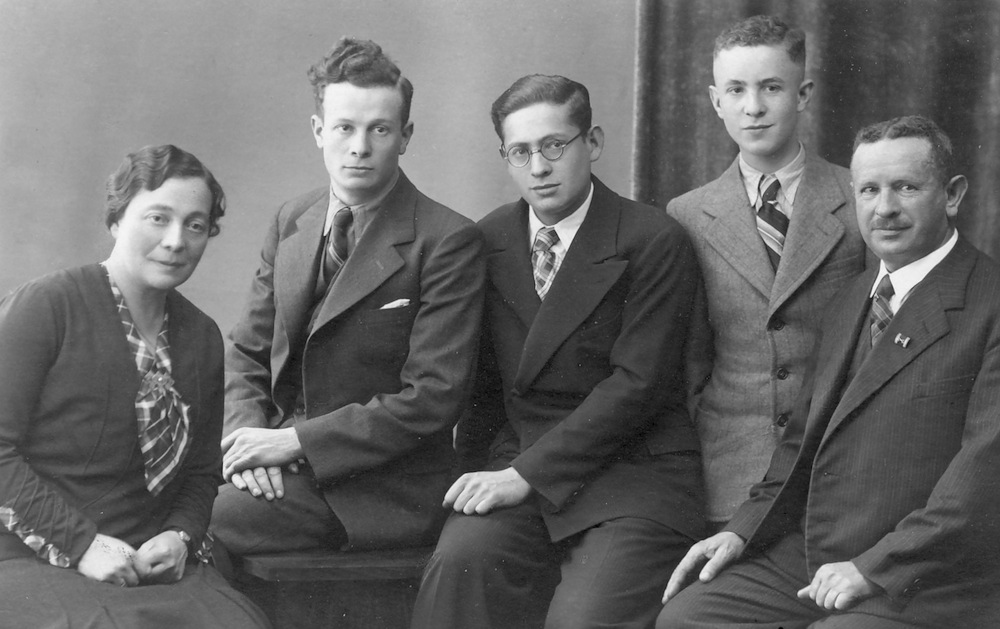 This page will be available in German as soon as possible. In the meantime, we post the English text.

The family of Max and Clara (née Nussbaum) Müller have remained firmly lodged in the memory of Themar. They lived in Themar from 1929 until 1942 and both the parents and the three sons — Herbert, Reinhold, and Willi — were central to the Jewish community in those years. 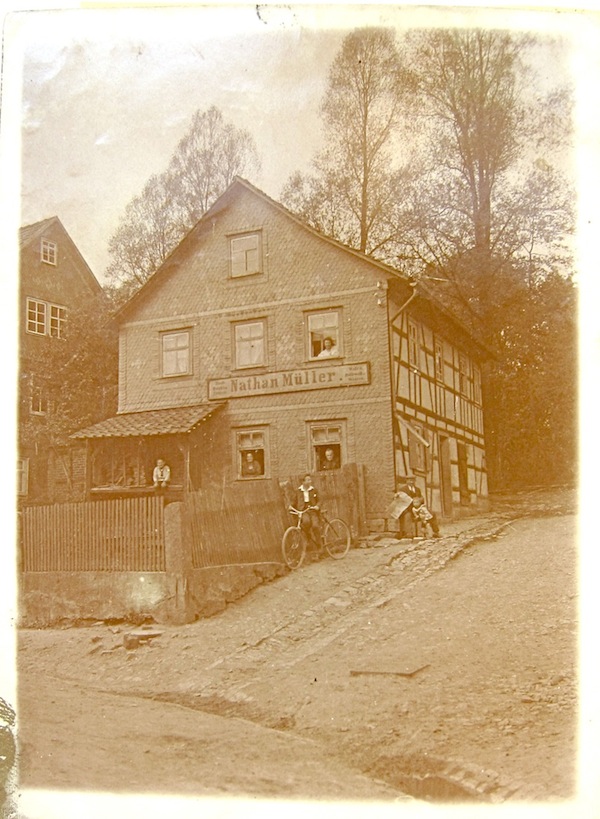 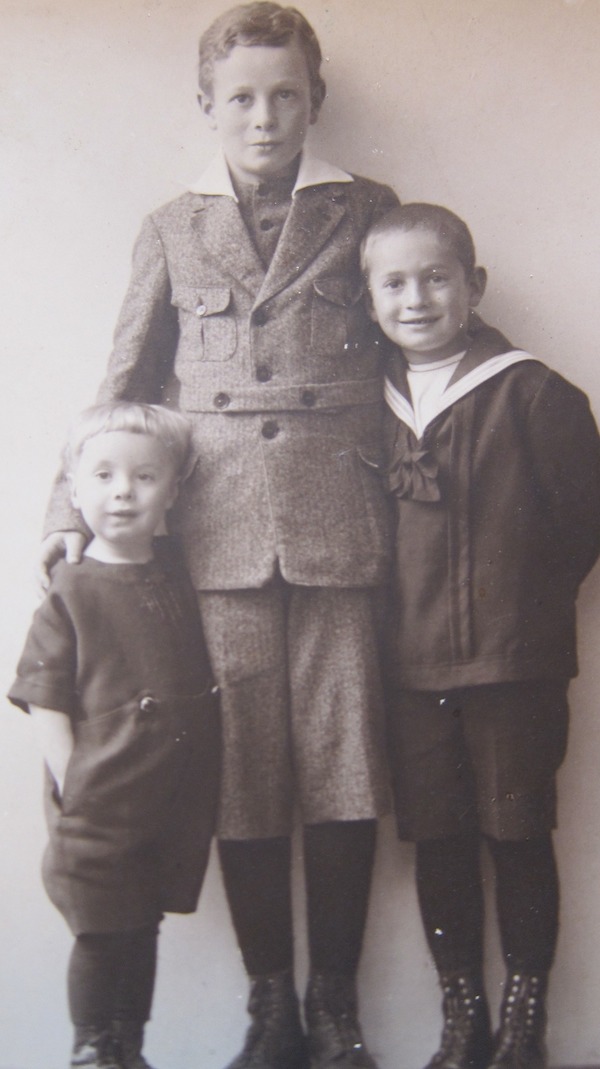 Max was the one with the longest connection to the area, b. 1884 in Marisfeld, the son of Nathan and Bertha Schwed Müller. At the time of Max Müller’s birth, Marisfeld was a small village with a total population of fewer than 500 and an even smaller Jewish community — after the disastrous fire of 1865, only seven Jewish families remained in Marisfeld.

Max remained in Marisfeld while his siblings migrated to other towns in Thüringen. Clara Nussbaum, who married Max in 1912, was born in 1890 in Bad Hersfeld, a much larger community than Marisfeld, with a population of 11,000 and a Jewish community of around 325. Family lore has it that Max promised Clara they would move to a larger town as soon as possible, but war and other unfavourable circumstances prevented them from doing so for 17 years.

Instead, they remained in Marisfeld where their first son, Herbert, was born in 1913. Max then went off to war for his country, earning an Iron Cross for his bravery. Upon his return, the couple had two more children: Meinhold in 1919 and Willi in 1922.

In 1924, Herbert, the eldest son, started attending middle school in Themar, finishing in 1928. In 1929, the Müller family moved to Themar. Their arrival prompted a distinction to be made between the Max Müller already living in Themar and the newly arrived Max Müller. The designation Max Müller I was given to Max Müller, b. 1873 in Themar and owner of the S. M. Müller department store in the Bahnhofstrasse. Max Müller of Marisfeld became known, both formally and informally, as Max Müller II,

The Max Müller II family lived at Meininger Strasse 17, on the northwest edge of the town, outside the city wall. The house served as both home and business and the Manufakturwaren (textile) business continued. Both Meinhold and Willi attended the local public school and continued to receive religious instruction from Lehrer Moritz Levinstein, as they had in Marisfeld. Herbert went to other towns in Bavaria in order to do an apprenticeship and then to work for other businesses. We have a collection of the postcards among the family members in the year 1931 which provide an intriguing insight into the dynamics of family communications — the cards are like the emails and/or tweets of today’s world! 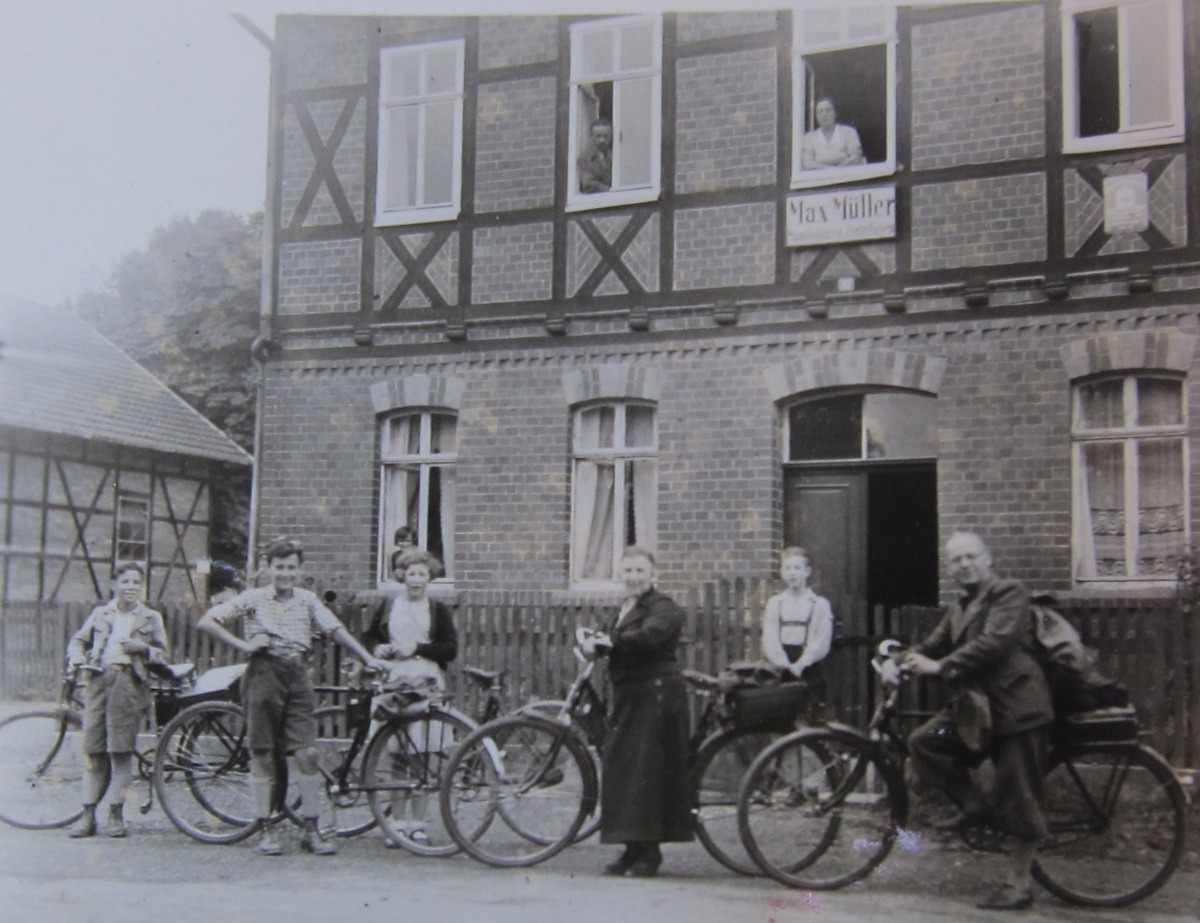 When the Nazis formed the government in January 1933, Max was 49 years old, Clara was 43, and the boys were 20, 14, and 11. Like many other Germans, both Christians and Jews, Max initially expected the Nazi regime to be a temporary aberration. Like many other German Jews, he found it difficult to imagine the extreme outcome of Nazi persecution of Jews. Through the first half of the 1930s, Max hoped that his status as a WWI veteran would protect him and he proudly wore his WWI medal on his lapel. 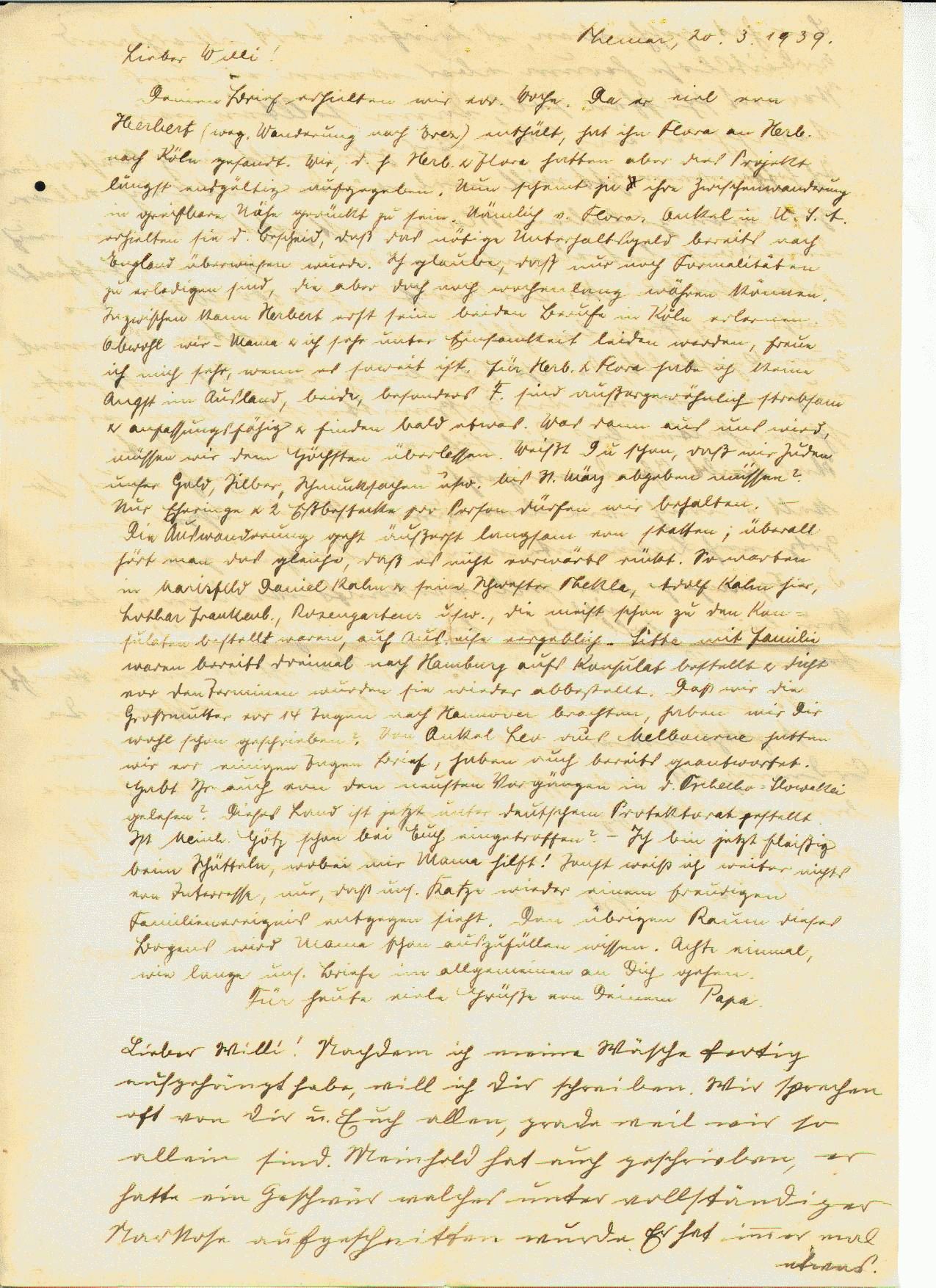 Clara Müller, Themar, March 1939 to Willy Müller, Palestine, describes the activities of relatives to secure their emigration from Germany to the United States. Source: The W. Müller Collection.

Yet growing anxiety about the future prompted the family to find emigration routes for the younger sons: both Meinhold and Willy were able to leave Germany before Kristallnacht, Meinhold left first, initially for Italy and subsequently for Sweden, and Willi left in 1938, just before Kristallnacht, for Palestine. Still in Germany at Kristallnacht, Herbert, who had married Flora Wolf in August 1938, and his parents faced the rapidly increasing difficulties of finding refuge in another country.

Relatives did their utmost to get both Müller families out of Germany. By late 1938, relatives were securing sponsors for Clara and Max to immigrate to the United States. In early December 1938, Clara wrote to Willi that both Albert Wolf, the brother of Flora Wolf, Herbert’s wife, and Max’s cousin, Herbert Sweed, in California were also taking action. Letters from Clara and Max to their sons Meinhold and Willy between December 1938 and 1941 detail these efforts (see ,,Innige Küsse„). Clara and Max knew that their numbers were high — in 1939, before the outbreak of war, Clara wrote to Willi that they would probably have to wait two years before they had any hope of coming within the American quota allowance. They explored other possibilities in South America and elsewhere, but everywhere the doors were closing on Jewish refugees. In March 1941, Herbert Sweed in Petaluma, California, a first cousin of Max’s, paid for the passage of Max and clara from Themar to the United States. Everyone hoped that their numbers would come up in time.

In summer 1941, Herbert and Flora were able to leave with Flora’s mother, Frieda Wolf (née Mayer). They travelled to Lisbon and on to the United States, arriving on the SS Excambion in New York City in July 1941. 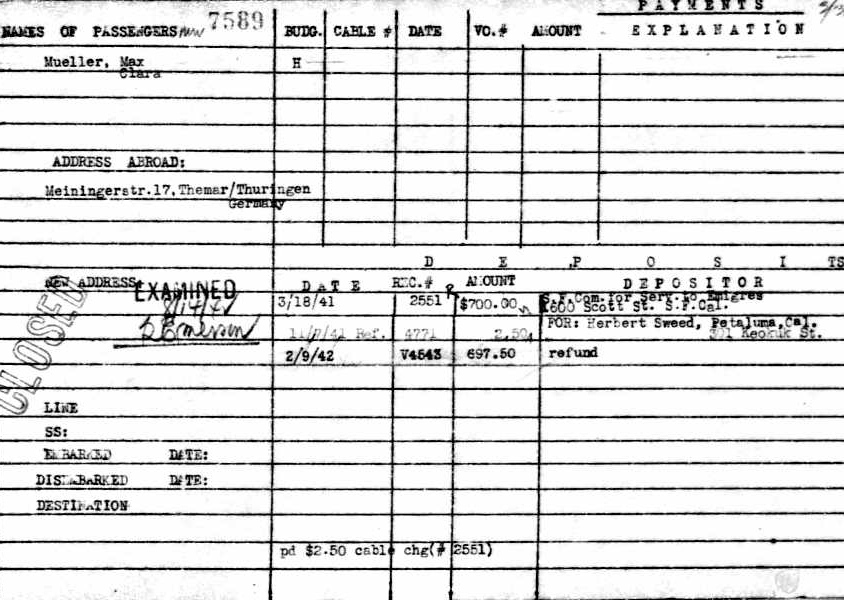 But time ran out for Max and clara: they had not reached the top of the list by October 1941, when all immigration from Germany was halted, and they could no longer leave even though their passage had been paid. On October 15, the first deportations of the German Jews began; in February 1942, Herbert Sweed was refunded his payment and the file was closed.

Three months later, on May 10, 1942, Max and Clara were part of the first deportation of the Jews of Thüringen, when 350 men, women and children were sent east to Belzyce Ghetto in occupied Poland. They died there, exactly when is not known. Max was 58 years old, Clara 52.

Clara & Max Müller wrote their sons, Willi in Palestine and Meinhold in Sweden, at least 44 postcards and letters between December 1938 and 8 May 1942, the eve of their deportation. Quelle: Privatbesitz: Sammlung W. Müller 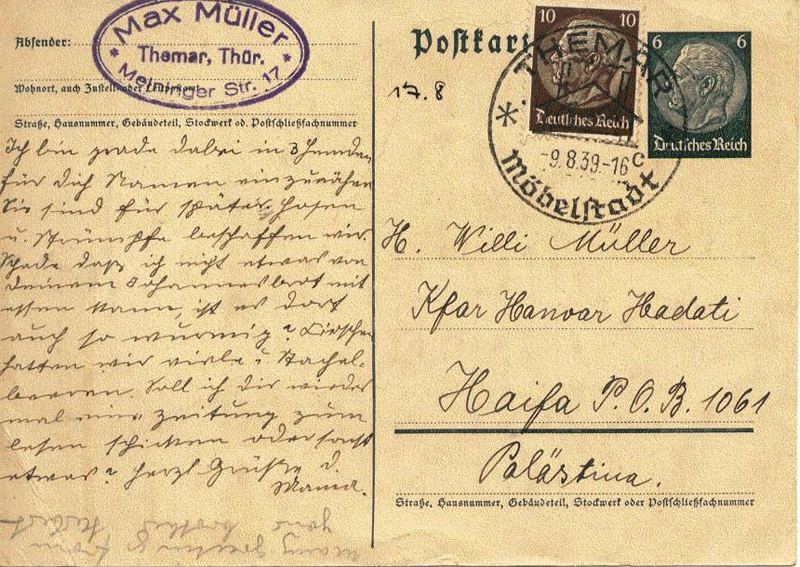