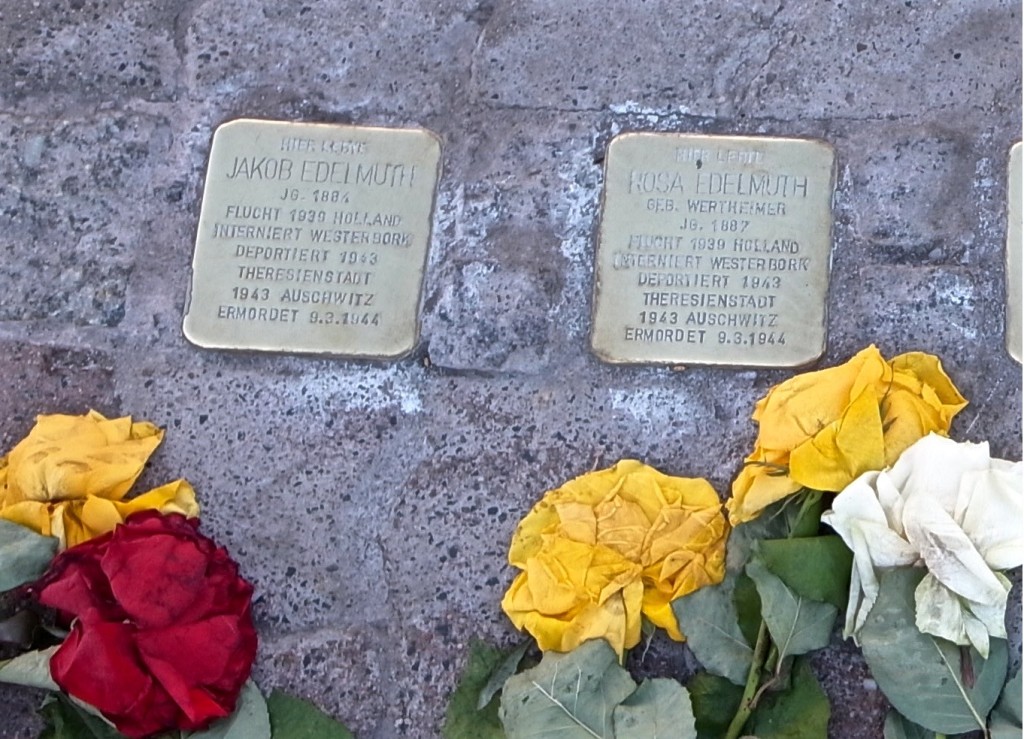 The laying of Stolpersteine for Rosa (née Wertheimer) and Jakob Edelmuth in Dessau on 20 March 2015 brings a form of closure to our search to assemble their story. It’s been a complicated and challenging task, and sadly we know most about the story of their lives under the Nazi Regime. Learning more about their lives before the Nazi Regime is a challenge we may not be able to meet.

We may, however, meet a different challenge: in our journey of discovery, we learned that Rosa Edelmuth, née Wertheimer, has more or less slipped out of the narrative of either her family, the Wertheimers of Marisfeld, Themar and Coburg, and of the Edelmuths of Beuern. We hope that telling what we do know may in some measure honour their memory and restore them to their family circles. 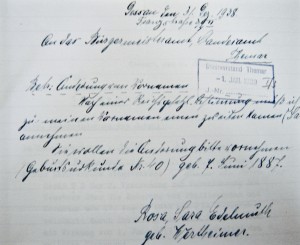 We met Rosa Edelmuth, née Wertheimer, in 2009 — right at the beginning of the „Themar Lost & Found Project“ — with several documents in the Themar City Archives. The first was Rosa’s letter of 31 December 1938 to the Themar Standesamt/Registry. It confirmed the addition of the name ‚Sara‘ to her given names, in compliance with the law of August 1938 requiring all Jews to do so. [Men were required to add the name ‚Israel‘.] The letter told us her names — birth and married — her birthdate, and the address at which she was then living — Franzstr. 3-4/II in Dessau in the province of Anhalt. 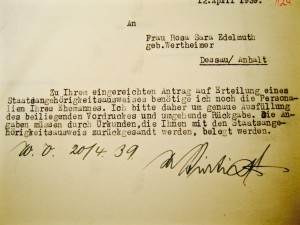 A letter dated 12 April 1939 and its envelope provided more snippets. Themar’s City Administrator responded to Rosa’s request for a certificate of citizenship. He told her to complete and submit a form, and return it with supporting documentation and information about her husband; he promised to return the documents. 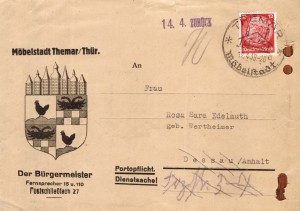 The letter did not reach Rosa and was returned to Themar on 14 April 1939. On the back of the envelope, written in pencil, were the words „verzogen nach Holland-13/4/- moved to Holland.13.April.“ At the bottom was the note of the Themar administrator: 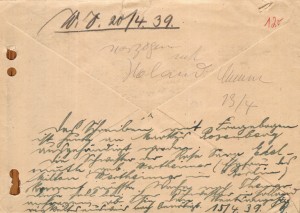 The first search of the German National Archives Gedenkbuch/Memorial Book and Yad Vashem online records informed us that Rosa had not found safe haven in Holland or elsewhere in the world. She had been deported from Holland in 1943, first to Theresienstadt Ghetto, and then on to Auschwitz.

These records did not tell us the name of Rosa’s husband: Gedenkbuch entries do not establish marital ties and no one had submitted a Page of Testimony to Yad Vashem that might have done this. The remarkable database compiled by Siegfried Wolf and colleagues, Juden in Thüringen: biographischen Daten 1933-1945 contained info about Milton Wertheimer and Bella Wertheimer (née Wertheimer) but unfortunately nothing about Rosa, probably because she did not live in Thüringen in 1933.

And so the matter rested and we turned to other research and learned more about Rosa’s siblings, Julius and Bella. Julius and his family had been able to leave Germany in 1936 and we followed their trail through the 1936 ship’s manifest, census documents in the States, and the discovery that Julius’s son, Alfred, had shot to fame for his stunning 1956 photos of Elvis Presley. We learned that Bella had married a Wertheimer cousin, Milton, and her name was therefore Bella Wertheimer, née Wertheimer.

Then, in January 2011, Dr. Bernd Ulbrich from Dessau contacted us about members of several of Themar’s Jewish families who had lived in Dessau and provided the critical information about Rosa’s husband, Jakob Edelmuth.  The 2008 brochure, STOLPERSTEINE für Dessau-Roßlau Ein Beitrag zur lokalen Gedenkkultur, contained this entry: 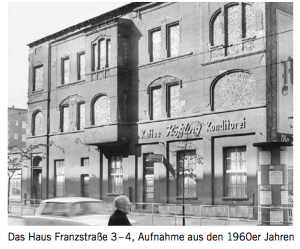 Then, in 2013, one of Julius Wertheimer’s granddaughter contacted us as she was planning a trip to her father’s hometown of Coburg:: „Finding the website,“ she wrote,“ has been an amazing piece to a puzzle that I have been trying to piece together for a long time. I did not know that my grandfather had siblings who died in concentration camps, let alone that my grandfather had siblings.“ Later that year, she visited Marisfeld, Themar and Coburg, where she collected important documents for us from the City Archives. These told us, for example, of the connections between those Wertheimers in Coburg and Rosa and Jakob Dessau. For example, Nathan Wertheimer moved to Dessau in 1934 to live with Rosa and Jakob and died there in 1935. Milton Wertheimer, Bella’s husband, stayed several times with his in-laws, Rosa and Jakob, through the 1930s. 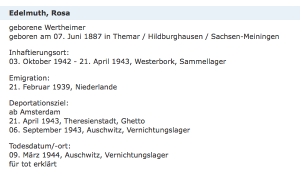 By 2014/15, updates to the online Gedenkbuch and the development of the Joods Memorial detailed succinctly the fate of the Edelmuths: on 21 February 1939, they left Dessau for Holland. They lived in Rotterdam at Blaakstraat 11/III. 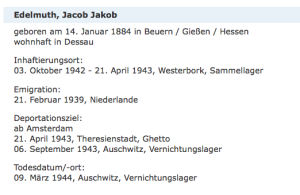 Unfortunately, emigration to Holland did not provide safety. The invasion of the Netherlands in May 1940 had more or less trapped them even though the first years of Nazi occupation were somewhat bearable. But
on 15 July 1942, the deportations from the transit camp of Westerbork began and the trains went direct to Auschwitz. On 3 October 1942, Rosa and Jacob Edelmuth were rounded up in Rotterdam and taken to the transit camp of Westerbork where they remained imprisoned for six months.

On 21 April 1943, they were on the first transport from Amsterdam to Theresienstadt Ghetto. According to the deportation chronology on the Gedenkbuch site, this transport „consisted exclusively of German Jews, of whom 195 were taken from Westerbork.“ Among them were World War I soldiers who had been decorated or wounded; they were told that Theresienstadt was a retirement home for privileged Jews. Also on the transport was Milton Wertheimer, husband of Rosa’s sister Bella, who had also been living in Holland (Amsterdam) since 1939. Rosa and Jakob were in Theresienstadt Ghetto six months before being transported further to Auschwitz. Both were murdered on 9 March 1944.

But, while the outline of their story became clearer, puzzles remain: in particular, Rosa seems lost to the story of both the Wertheimer and Edelmuth families. 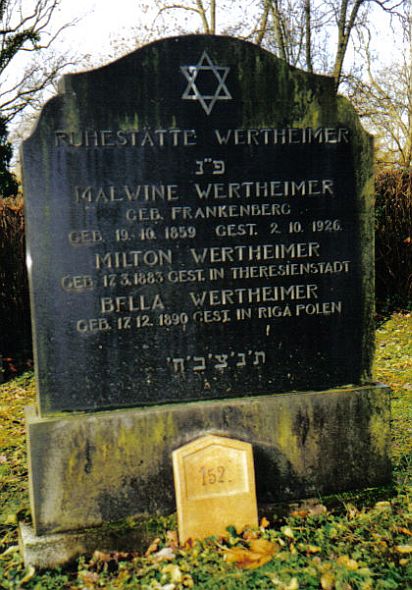 First, Rosa’s presence in Coburg left little or no trace. The Wertheimer family moved from Themar to Coburg in the 1900s — exactly when we do not know — and Rosa probably lived there before her marriage and move to Dessau. Her parents, Nathan and Malwine, and siblings Julius and Bella remained in Coburg. Malwine died in 1926; In 1934 Nathan Wertheimer moved from Coburg to Dessau to live with Rosa and Jakob. in 1936, Julius and his family left Germany for the United States. Bella and her husband, Milton Wertheimer, continued to live in Coburg until 1939.  After the war, when someone [family members and Coburg residents in 2013 do not know who] sponsored a gravestone for Malwine Wertheimer, it recorded only the names of her daughter and son-in-law, Bella and Milton Wertheimer.

Rosa was also not to be found within available sources of the Edelmuth family. The family, which had been settled in Beuern near Gießen since the 1700s, has been richly documented, particularly in online genealogical records back to the first Jakob Edelmuth in the early 1700s. Initially it seemed possible that Rosa, who married Jakob in 1920, was Jakob’s second wife after the death of his first wife, Minna Kadden in 1912. But no further evidence of this link was found. Moreover, there was confusion about who Jakob’s parents and siblings were, and the fact that there were two Jakob Edelmuths of Beuern, one born in 1884 and one in 1885.

Recently, however, we have learned some critical elements of the stories, the familial context of both Rosa and Jakob. First, we have been able to trace Rosa’s family roots — the Wertheimers and Frankenbergs — back into the 1700s in Marisfeld, Sachsen-Meiningen/Thüringen.

Second, Hanno Müller of Steinbach has provided us with key information to locate Jakob Edelmuth within his family context. His research appeared in 2013 in Juden im Busecker Tal. Teil 1: Familien (2013)

Jakob Edelmuth, the husband of Rosa Wertheimer, was born on 14 January 1884 in Beuern in Hessen. Hw was the son of Süssmann and Johannette (née Edelmuth) Edelmuth. Jakob was a twin, and he and twin brother Hugo, were the youngest children. Their births came after Süssmann and Johanette had lost two children — Gustav, b. 1881, and Johanna, b. 1882 — in infancy. Jakob and Hugo were therefore significantly younger than their siblings Lina, Berthold, and Kathinka.

Once we knew who Jakob’s parents and siblings were, we were able to follow the stories of his family and provide him with some familial context. Pages of Testimony submitted to Yad Vashem, memorial pages in places where the Edelmuths lived — for example, Mellrichstadt, where Hugo lived with his family; and the stories that have accompanied the laying of Stolpersteine for Edelmuth family members all contributed. 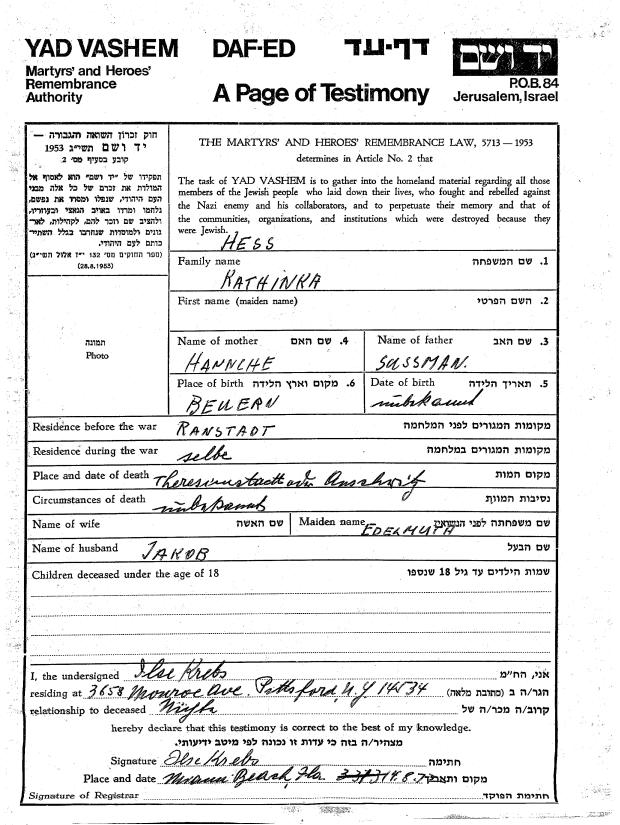 This PoT tells us that Johannete Mariane Edelmuth was known as Hannche to her family.

As with Rosa’s family, only one member of Sussmann and Johannette Edelmuth who were alive in 1933, escaped. Ilse Krebs, née Edelmuth, the daughter of Jakob’s eldest sister, Lina, was able to leave Germany. In late summer 1938, she left for America with her husband Friedrich/Fritz Krebs and their 17-year-old son, Irwin. The 1940 Federal Census recorded them living in Baltimore but they subsequently moved to Rochester, where Fritz died in 1981.

After the war, Ilse Krebs submitted Pages of Testimony to Yad Vashem.

We certainly know more now about Rosa Wertheimer and her husband Jakob Edelmuth than we did in 2009, but should anyone reading this page have information, questions or comments, please contact Sharon Meen at s.meen79@gmail.com or smeen@mail.ubc.ca. We look forward to hearing from you.

Below is a Descendants List for Süssmann and Johannette Edelmuth as identified by H. Müller and supplemented by other sources cited at the bottom.

Acknowledgments:
We wish to thank:
1. Bernd Ulbrich of Dessau for his contributions to our knowledge of the Edelmuth family in Dessau.
2. Mr. Hanno Müller of Giessen for his information about Jakob Edelmuth’s family. His website is http://www.fambu-oberhessen.de. In particular, Mr. Müller clarified the distinction between the two Jakob Edelmuths were born in Beuern, one in 1884 and the other in 1885. For more information on Rosa’s husband, and the familial context please see this page.