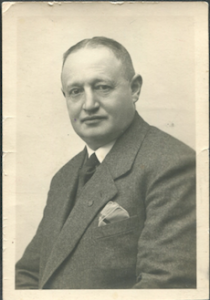 Markus Rosenberg came from the small village of Lichenroth/Kreis Gelnhausen, about 77 km. to the northeast of Frankfurt. In 1885, the village had 515 residents of whom 114 were Jewish. This means that Markus Rosenberg came from the small village of Lichenroth had a much higher proportion ofJewish residents than did Themar; when Markus was born, Jews represented 22% of the population, over twice as large a proportion as in Themar. There was a synagogue, a Mikva, and a Jewish elementary school for approximately 20 children in Markus’s childhood years.

Markus came from a family with very deep roots in Lichenroth, the family of Gump Rosenberg (b. 1780) and Sara Rosenberg née Strauss (b. 1789) 14 family. His father and mother were Jakob (1857-1890) and Berta Rosenberg. He was the eldest of four siblings: two sisters, Sara and Ida, and one brother, Max, completed the family.

Markus would have completed schooling around 1901; nine years later he moved to Themar and married Else Kahn. Markus went to war in 1914, Rosenberg fought in WWI, was taken Prisoner of War, and was awarded the Iron Cross, 2nd class. His brother, Max, part of Wirtschaftskp.12, was killed on 14 February 1918.

For a number of years in the 1910s, Markus and Else owned the store at Bahnhofstrasse 150 which Karl Grünbaum sold when he and Hulda moved from Themar to Erfurt in 1913. But Markus and Else closed the business some years later; we know that Markus contracted tuberculosis at some point and this may be one of the reasons why the shop needed to close.

Markus was in Themar in November 1938 and rounded up and hauled off to Buchenwald. Dr. Ernst Ledermann wrote a letter to the Gestapo on his behalf — it is from this letter that we learn of Markus’s tuberculosis, as Ledermann appeals for Markus’s release so that he can receive treatment. Markus was not among the first men released, however, possibly because Ledermann’s letter made no mention of the Rosenbergs’ intent to emigrate. Only on 6 December was Markus released from Buchenwald, one of the last of the Themarens to be released.

The Auswanderung Datei/Emigration File of Julius Rosenberg includes documents that tell us that Markus and Else did hope to emigrate to the United States — they received waitlist numbers for the American quota that put them in line for an appointment with the American Consul. Given Markus’s illness, however, the chances of his being able to immigrate into the United States, were probably non-existent. Moreover, their waitlist numbers were so high, that their chance to enter the United States would only have occurred in 1942 or later.

A document in the Themar City Archives tells us that Markus went to the Jewish training camp for emigration at Landwerk Neuendorf (near Berlin) in September 1939. How long he was there is unknown. 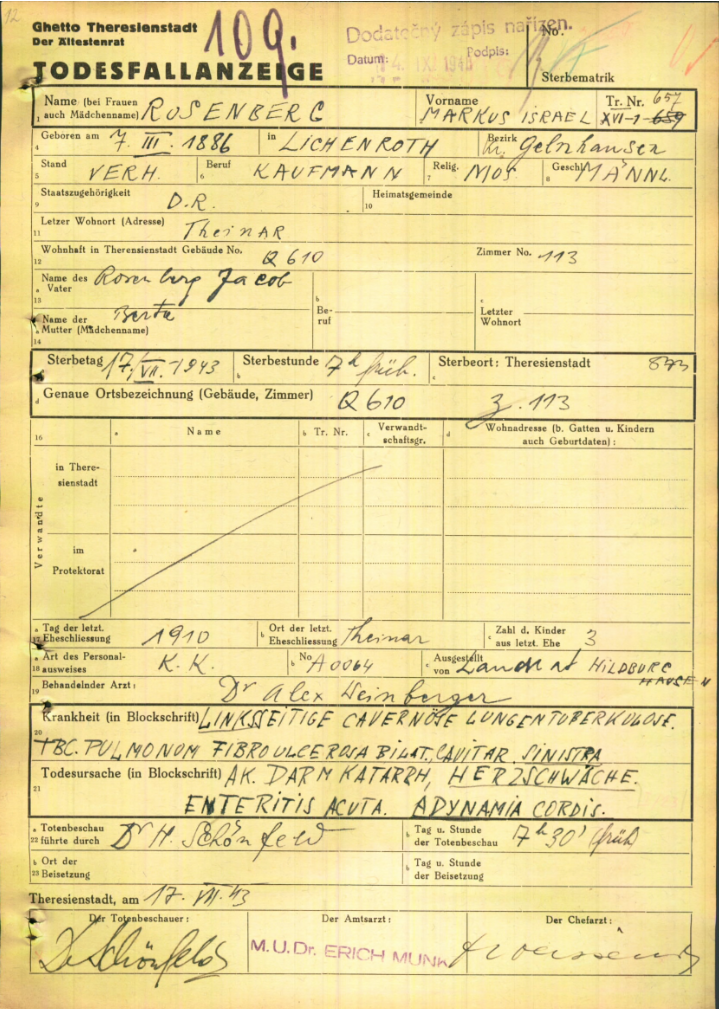 Markus returned to Themar and was living there when the deportations of German Jews began in 1941. He was deported with his wife to Theresienstadt on September 20, 1942 and he ‚died‘ there in July 1943, age 57.